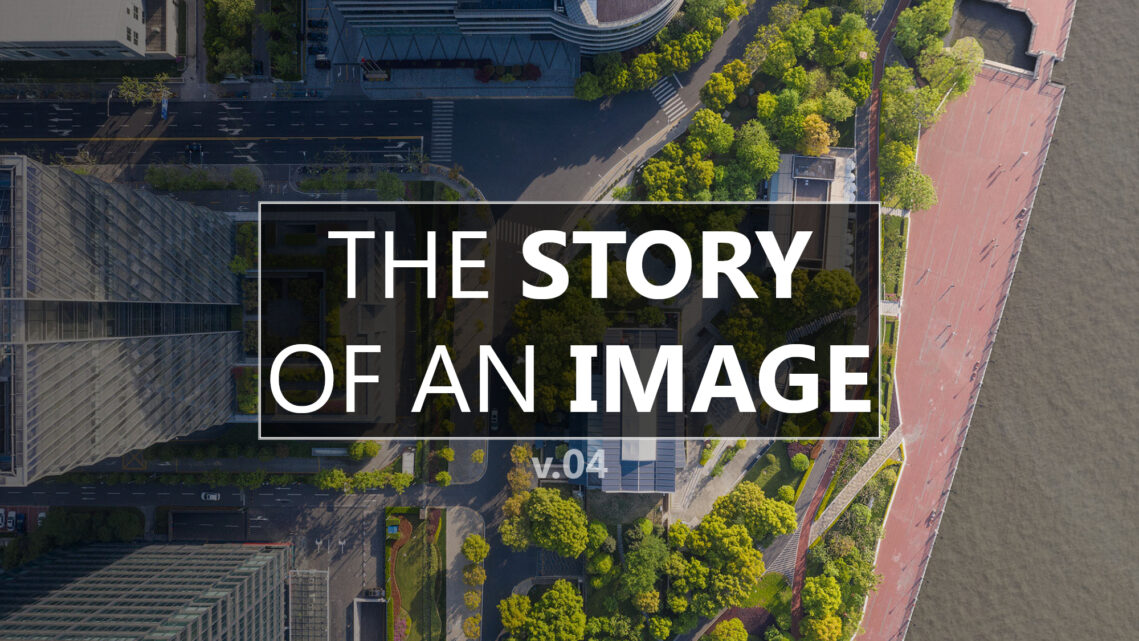 This latest edition of Story of an Image brings us back to Shanghai as we take a look at an image from a commissioned shoot of Foxconn’s Headquarters building designed by KRIS YAO | ARTECH.  The spotlighted image ended up being the final piece of a puzzle to placing the building in its context for the viewer.  Let’s dive in!

Speaking of context, when your building is located on a site as extraordinary as this, you’d better take the time to highlight it.  Foxconn HQ sits prominently along Shanghai’s Huangpu River on a building plot that is in the heart of the city’s financial Lujiazui district.  This is prime real estate in the country’s most populous city.

Foxconn HQ is a high-end office tower that embodies the owner’s spirit of precision.  It’s hard to get excited about an office high-rise in a city that’s chock-full of them, but this building stands out for a variety of reasons.  First and foremost, because of its unique, diagonal double façade.  The outer layer is comprised of angular, faceted glass that gives the building its sleek appearance.  The cavity in between the two façade layers helps moderate the effects of extreme temperatures.  The building integrates additional sustainable design strategies including solar panels, geothermal heat pumps, rainwater collection, wastewater recycling, among others.  It achieved the coveted LEED Platinum rating from the U.S. Green Building Council.

As mentioned, the building sits adjacent to the city’s main river and this proximity is something we wanted our set of images to reveal in multiple ways.  We already had the overall establishing shot of the building as a part of Shanghai’s iconic skyline.  Additionally, we had several views from the riverside pedestrian promenade looking back at the office tower’s western façade.

What we were missing was a shot that accurately shows just how close the building is from the river’s edge.

We decided to take the drone up one more time during late afternoon golden hour.  Here are a few tests of the views we looked at, none of which worked well:

One obstacle we kept running into during this shoot is that the building directly to the west of our building is one of the ugliest buildings conceived in the history of the architecture profession. I’ve always contended that bad design should be criminalized and feel like this particularly egregious example would be a great place to set the precedent.  But I digress.

In the end, we decided on a top-down image that only showed a fraction of the building but is instead dominated by the surroundings rather than the tower itself.  The framing showed just enough of the building itself and focused more on the abundance of greenery in the riverside park that acts as a buffer between the tower and river. We waited for that golden late afternoon sunshine which washes over our building and its podium roof garden for only a very brief time period.

There’s not too much of interest to share in terms of post-work for this shot.  Here is the raw image straight from the drone.

Basic Lightroom edits and some minimal clean-up in Photoshop.  We darkened the river and actually clone stamped in some additional people walking along the promenade, as we shot this during the week when it was quite empty.  On weekends and holidays, the riverside boardwalk is usually enjoyed by much larger crowds of Shanghai residents and tourists alike.

I also love that this image also works well in portrait orientation – great for mobile display.

This article highlights the importance of understanding the most important attributes of your client’s design and devising a plan to showcase those attributes in different and hopefully unexpected ways. Hope it was insightful!