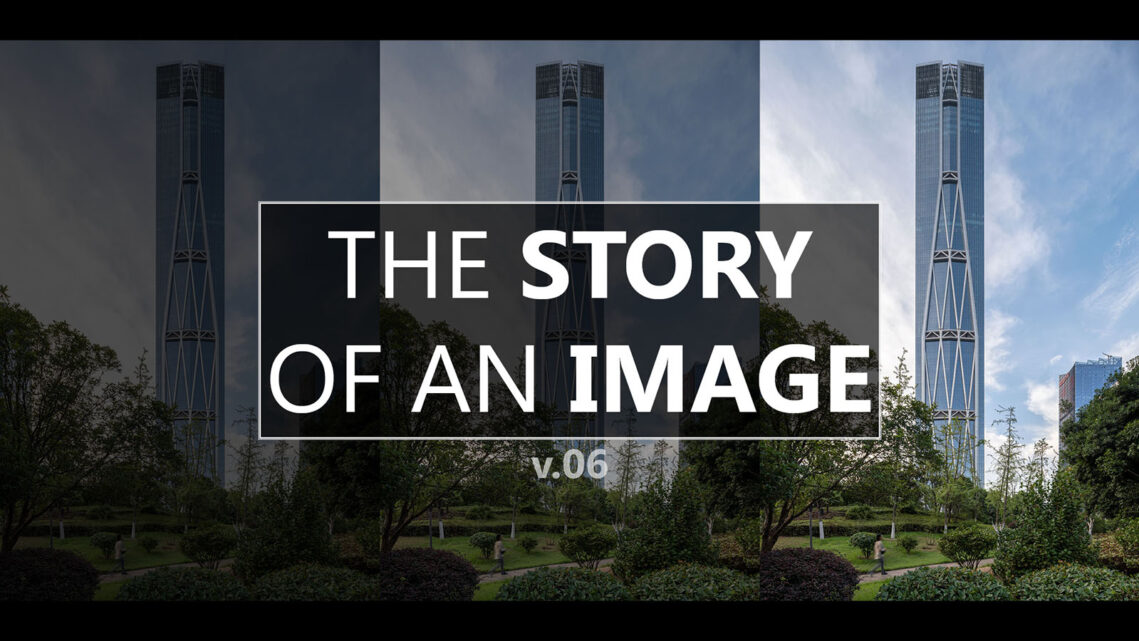 This edition of Story of an Image takes us to central China to photograph a large-scale mixed-use development designed by global architects, Woods Bagot.  We ended up staying on site for four and a half days to capture this skyline-defining project.  Here’s the story of one of our favorite images from what became one of our most enjoyable shoots of 2021.

The mixed-use development is located in Changsha, the capital city of central China’s Hunan province.  The site is located in the middle of a rapidly growing new CBD along the banks of the Xiang River.  In addition to the river, this high-density district is surrounded by mountains, which was an important feature of the site that we definitely wanted to highlight.

Xiangjiang Fortune Finance Center is a massive 580,000 square meter (6 million square feet) mixed-use development anchored by two geometrically similar landmark towers, one of which is home to Changsha’s JW Marriott hotel.  The taller of the two towers rises up to 330 meters (1,083 feet) and is the highest building in the area. The project is made up of office space, two hotels, a retail shopping mall, and is connected to the city’s underground metro system.

By day four of our shoot, we had already captured the entire building in context from a variety of vantage points, using both drone and eye level shots to showcase the importance of the development to its surroundings.  Photographing tall buildings that require you to traverse large distances is already a significant task.  Doing it during a mid-Summer heat wave for five days in a row makes it all the more challenging.  We thankfully came away with some images we were happy with.

There was one more important view that I wanted to see if we could capture before we wrapped and headed back to Shanghai.  The taller of the two towers anchors the southeast corner of the site and is fronted by a lovely green park.  I wanted to see if we could isolate this tower from the rest of the building and show its relationship back to the park.

We had already taken an aerial shot from this angle, but I felt like an eye level would be much more powerful.  We backed up all the way to the southernmost edge of the park, strapped on the 17mm tilt-shift and fortunately were able to just barely get the tower in frame.

The composition of having this beautifully tall tower grounded within the park works really well.  It captures a rare moment of serenity in an otherwise dense and bustling environment.

With the tower being backlit by the late afternoon sun, we needed to lift the shadows a bit to balance out the exposure. Additionally, there was some minor keystoning as we needed to angle our camera up just slightly to capture the tower with a bit of sky above it. After these basic edits were finished in Lightroom, we shifted over the Photoshop for some cleanup work.

The cleanup work in Photoshop was minimal with the exception of the tower’s crown. Unfortunately, the owner of the building felt compelled to slap on a giant red logo that doesn’t do a great job of respecting and integrating itself into the tower’s design. We removed that as well as added the finishing touches to the top of the tower since it hadn’t been completely finished yet. The only other edit was to add in a person to the foreground to provide a sense of scale.

And here we have it, the final edit. Again, I like the way this image isolates the tower and the park, removing the chaotic city surroundings for this one brief moment. The pedestrian pathway along with the single human figure in the foreground serve as a nice leading line to lure the viewer’s eye into the photo and towards the landmark tower. Definitely one of our favorite images from the set.

How many of you photograph tall buildings? Do you end up spending the vast majority of your time running around the city searching for that perfect view like us? We usually end up using China’s ubiquitous shared bikes to quickly get around. How about you?