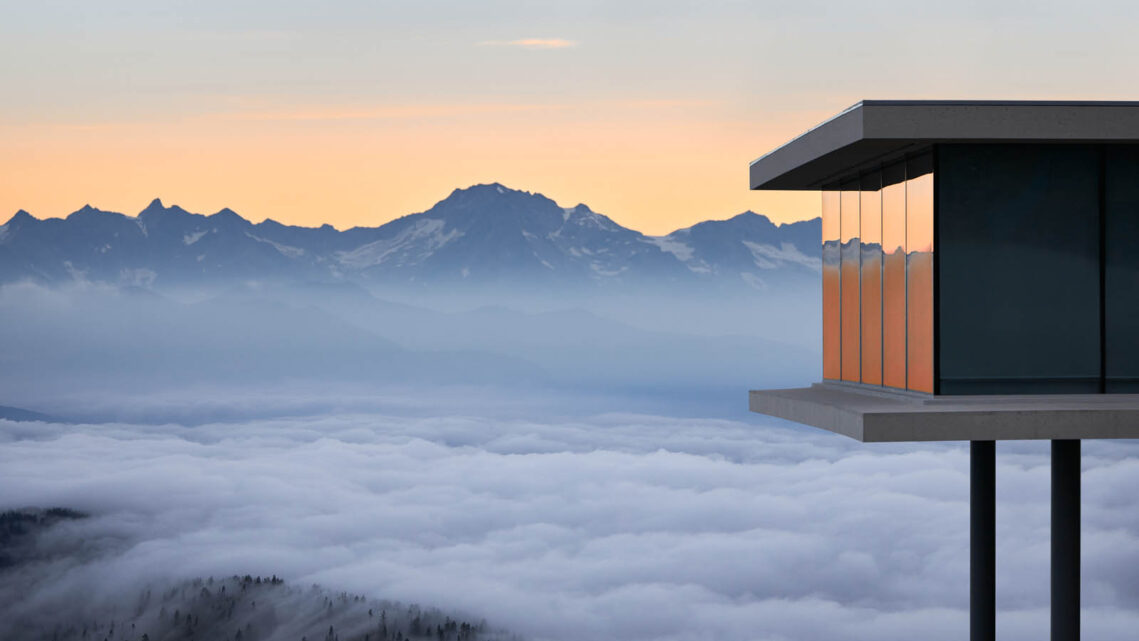 Every now and again you come across a project that is truly mindblowing and special. Not just for the quality of the images, but the logistics, planning, and story behind them. Albrecht Voß‘ and his Modern Alpine Architecture series is that project for me. I’ve been following it for quite some time as he has faithfully added more and more pieces to the series. Now that it is (mostly) complete, I am sure you will agree that it is one of the coolest, most inspiring, projects out there.

Albrecht is an architectural photographer based out of Leipzig, Germany. He loves mountaneering and alpinism. Combining his passions, Albrecht set out to photograph his favorite examples of alpine architecture, including various mountain shelters, architectural sculptures, museums, and wineries. Albrecht jokes that he is 50% photographer and 50% packmule. He and his assistant Marcus often would pack their photography gear in addition to backpacking gear, and climb fields of boulders, glaciers, and through high passes to reach their subjects.

Once arriving “on location” they were often at the mercy of brutal weather – outside in freezing temperatures, in driving rain and fog, or climbing across icy craigs deep in the night to get photographs of the structures under the endless stars of the alpine sky. Albrecht’s results have been often celebrated – and rightfully so. Albrecht and his MAA series is the winner of the 2021 Hasselblad Masters award in the architecture category. He received recognition at the 2021 European Architectural Photography Prize, was nominated at the 2021 Fine Art Photography Awards with the series, and was shortlisted for the 2021 APALMANAC Project of the Year award category.

Modern Alpine Architecture is chock full of compelling behind-the-scenes photographs that give you a strong appreciation for what Albrecht and his assistant Marcus go through to reach and photograph these one-of-a-kind structures. Often we see Albrech standing in fields of ice, flying his drone through dense fog, and deploying his tripod on the edge of cliffs and scree.

It is from those precarious vantagepoints that Albrecht is able to show off this incredible architecture in the most impactful way. Take this photograph of Neue Schwarzensteinhütte for example. Albrecht explains “The howling wind over the scree and glacier fields between Tribachkopf and Schwarzenstein brings dense fog and snow and causes treacherous weather for an estimated 40 days out of 90.

This uninviting and challenging terrain makes this place difficult to reach, as it is only accessible by rock climbing or by helicopter. It’s just amazing that great architecture, like Stifter + Bachmanns New Schwarzensteinhütte can exist here. Oxidized by the unforgiving conditions around them, the Alpenhütte’s once gleaming golden copper facade has turned almost black. The challenge of reaching the ridge on which the Neue Schwarzensteinhütte stands and the opportunity to demonstrate the environmental impact on this three-year-old example of perfect alpine architecture made me pack only my essential gear to face the extreme and to climb up to this shelter and add this magnificent landmark to my Modern Alpine Architecture collection.”

Yes, you read that correctly – Albrecht packed his gear and climbed to an altitude of 3,000m to photograph New Schwarzensteinhütte. Next time you are irritated that you couldn’t find a parking spot right outside to building you are photographing, remember this project!

He describes “After a small breakfast we climbed the Tribachkopf, accompanied by a faithful hut dog, and saw the Neue Schwarzensteinhütte surrounded by glaciers and rock faces. This place, flooded with the morning light, is accentuated by the directional light and the deep shadows that show the texture and hardness of the crest and snowmelt…We see how small the Neue Schwarzensteinhütte is compared to the surrounding mountains, just a small sculptural speck in the landscape. What a humble feeling!”

His photographs usually display the dramatic sunrises, sunsets, and powerful weather moving through the alps.

The Timmelsjoch Crosspoint was one of the first Modern Alpine Architecture projects I saw from Albrecht. I fell in love with the way he captured the forms and textures of the Crosspoint.

Albrecht’s photographs from the MAA often appear alien and otherworldly. The architecture itself defies traditional forms, and is often appears to be teetering or growing out of a stark and craggy landscape, as seen here with The Passmuseum. Couple that with Albrecht’s penchant for making his photographs in peculiar weather, and the results are otherworldly images.

I love these photographs of Kelleri Bozen in Bolzano, South Tyrol of the Italian Alps. Albrecht and Marcus photographed the following two pictures at 5:30 a.m. The gate to the winery was locked, and the only way to quickly capture the iconic illuminated cube against the perfectly purple misty alps was to send up the drone. Albrecht is a quick problem solver and does not let a lack of access get in his way. You can read more about his adventure photographing the winery’s unique gravity-fed grape system here.

The Lumen Museum is another structure included in Albrecht’s series. Lumen is a museum dedicated to honoring alpine photography. It sits perched over the clouds in the alps. Albrecht masterfully shows off the museum in relation to the landscape. It is hard to ignore the beauty of these photographs, with the rolling fog, and mountain range reflected in the massive glazing.

MAA features another winery, the Kellerei Kurtatsch. I don’t know about you, but my local Maryland wineries do not look like this! Albrecht says “In order to photograph the retail space’s new mountain-like dolomite facade in conjunction with the existing architecture and the landscape to which it is bound, I had to use a number of techniques to capture the mood and welcoming atmosphere of the winery and the relationship between the building and show its location. The challenging terrain and complex perspectives required my skills as a drone pilot for aerial photography. Photographing the winery, even during normal operating hours, required patience, logistics and sensitivity.”

Another sub-project you can see in the Modern Alpine Architecture series is Albrecht’s photographs throughout the Timmelsjoch Experience. Albrecht and his assistant documented each of the six museum-like sculpture stations stretching along the Timmelsjoch. The photographs in this series are atmospheric, infused with elements that heighten our senses, like mist, dust, fog, and rocky outcroppings.

Albrecht is particularly great at showing architecture interacting with its environment. Here we can see the Fernrohr installation growing out from the rocky alpine cliffside. Our attention sweeps through the frame, where below a motorcyclist drives on the Timmelsjoch, presumably to (or from) the Crosspoint’s motorcycle museum.

Albrecht also uses this series to showcase the shapliness of alpine architecture. Throughout this expansive series, we see familiar forms echoing across the regions different structures.

The scale and grandure of this series is impossible to ignore. Interesting, functional pieces of architecture are displayed at home in some of the most mercliess, demanding, site environments on earth.

I can’t express my love for Albrecht’s Modern Alpine Architecture series enough. It is a testament to Albrecht’s artistry, technical prowess, and his appreciation and understanding of this genre of architecture and design, as well as the environment it inhabits.

Head over to albrechtvoss.com to see more of Albrecht’s work. If you’re looking for the Modern Alpine Architecture series in particular, you can find it here. Albrecht also has a beautiful Instagram account which you can find at @albrechtvoss.