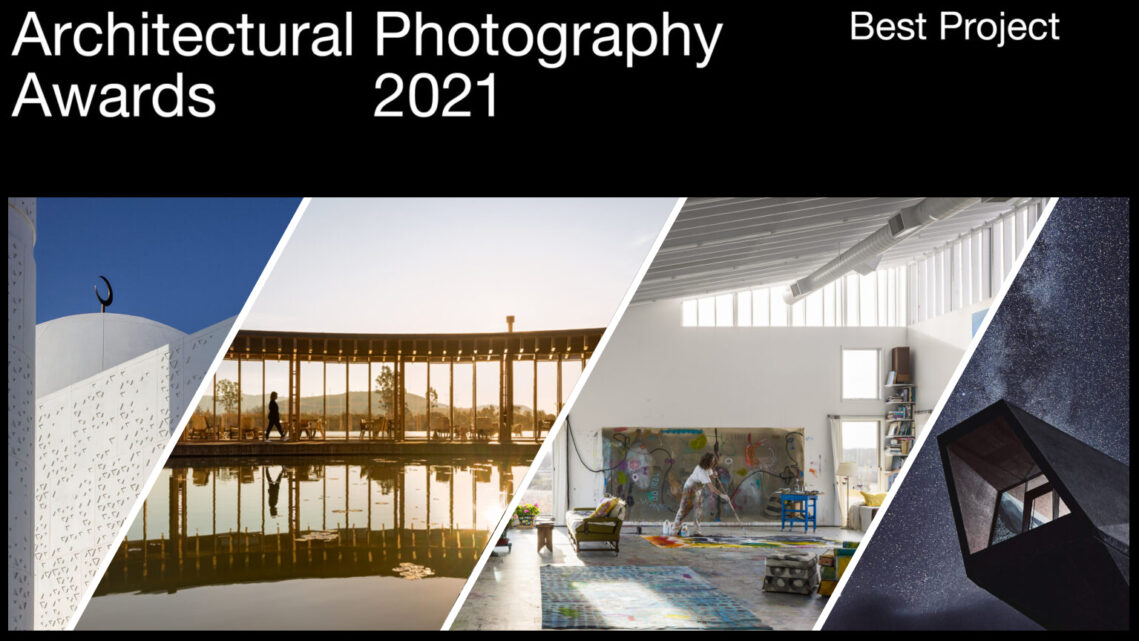 The wait is over! It’s finally time to reveal the finalists for the 2021 Project of the Year award. There were so many phenomenal entries for this category – and if you remember the two-part Project of the Year Award longlist – you know that the judges really had their work cut out for them to narrow down their choices.

After tallying up the judges’ scores, we’re happy to share the 10 best architectural photography projects of 2021 with you:

Our first shortlisted finalist is Nate Sheets and his photographs of the Jane Booth Artist’s Studio by Hive Design Collaborative. Judge Holly LaDue notes “This collection says a lot for a relatively smaller building/project compared to the rest. I think in a relatively small number of photos (six total) this photographer really manages to bring you into this artist studio, show you all around the exterior, and show it in the best possible light.” Perfectly said! Congratulations to you Nate!

There is so much to love about Ishita Sitwala’s photographs of SIRENITi-House by architect Kanan Modi. Judge Ryan Gobuty distills it down to “[This project is] compositionally very powerful in its execution. The tonality is spot on!” It’s great to see you on the shortlist Ishita!

The Fish Lane redevelopment by architects Richards and Spence as photographed by David Chatfield is next on the docket! Judge Eric Reinholdt gives us some insight into his interest in this unique photo set by noting “This project has a mysterious quality to it, which makes it stand out from other entries.” Awesome work, David!

The judges loved Chase Daniel’s photo series on The High Road by Ravel Architecture & Kopicki Design. Holly shares “One of the things that makes this project so successful is, again, the completeness of shooting this house. You get a range of perspectives from around the house’s exterior that help you understand the architecture of this building as well as appreciate its beauty. I love that last shot because it surprises you after all the daytime shots, and just when you think you know the building, you see this completely different viewpoint.”

Next on the list is Brad Feinknopf’s photo series of the 1000 Museum by Zaha Hadid. Ryan Gobuty summed up Brad’s project with a simple sentence; “Whatever this place is, I want to stay there!” Nice job making Hadid’s work look even more appealing Brad!

We’re excited to see Albrecht Voss’ Modern Alpine Architecture series on the shortlist! Judge Noah Walker said it best in his notes where he explained “Incredible light and consistency of tone and balance across the set. I am completely transported. I want to visit this place – futuristic and modern. Captivating. The fill lighting is masterfully done.” Great job Albrecht!

Doublespace Photography’s project for Calgary Central Library by Snohetta in collaboration with DIALOG is next up on the list for Project of the Year.

Judge Holly LaDue shares “This collection of photos takes me through the building from outside to inside and give a full impression of the highlights of the structure. Not only do I get an understanding of this library (there’s legibility, a kind of clarity consistent in the photos), but they’re composed in a way that really celebrates the space.

There’s gorgeous contrast and play of light/dark, light/shadow, and skillful views of multi-level interiors and winding stairs. I appreciate the quieter, detailed shots as much as the swooping, expansive shots. It is truly a beautiful portfolio of this building’s curves, ingenuity, and real-life human use.” We couldn’t agree more!

The Park Union Bridge as photographed by Jason O’Rear rounds out our list of honorable mentions.

Our judges Holly and Eric commented that they enjoyed Jason’s “dynamic images that capture both energy and stillness” and that “the breadth of captures and views is above and beyond.” Congratulations Jason!

The runner-up for the 2021 Project of the Year Award is Gerry O’Leary and his series of the Mosque of Light by Dabbagh Architects. Gerry shares “The assignment was to photograph a small new contemporary new mosque in an unlikely industrial location of Dubai. It was not easy as it might look. I revisited with the architect and other subjects as I needed to add the human element to fully articulate the story.”

So, what did the judges like about it? Aidan shares “This series of images ticks all the boxes: visual consistency, technical proficiency, as well as being able to translate a feeling of the place through photography. The photographer’s use of the camera strengthens the spirit of the building and truly captures its beauty.”

Eric notes “The handling of white balance animates the stark white forms. I love the interplay between crisp shadows of day and warm illumination at night.”

Congratulations to Gerry for placing second in this category. He’ll receive a prize of $500 USD and the runner-up APALMANAC Project of the Year trophy! Check out Garry’s work at gerryoleary.com.

The Winner of Project of the Year

Congratulations to the winner of the 2021 Project of the Year Award, Rafael Gamo! Rafael’s photographs of Sordo Madaleno Arquitectos’ San Nicholas Club House are absolutely breathtaking, and it is easy to see how this project could have captivated the judges’ hearts. Each photograph stands alone as a strong image, but combined into a series, these photos tell a beautiful (and consistent) story about San Nicholas Club House.

Judge Aidan Imanova says “The photographer masterfully balances natural light with shadows and frames all the images in a very interesting way. Some of the images in the series and very original in their composition and offer various perspectives into the architecture and the way it interacts with the environment by playing with light and reflective surfaces.”

Ryan Gobuty simply says “Thank you for not shooting at high noon. The quality of light captured is spot on.”

Eric Reinholdt shares “Subject matter lends itself to compelling visuals. The images reveal the careful balance between natural and man-made which underlies the design of the project, especially the manipulation of the horizon and shadow.”

A giant round of applause to Rafael, Gerry, and all those on the final shortlist here. We appreciate everyone who took the time to participate in our first-ever photography awards, and well look forward to seeing all of your beautiful entries in our next contest.