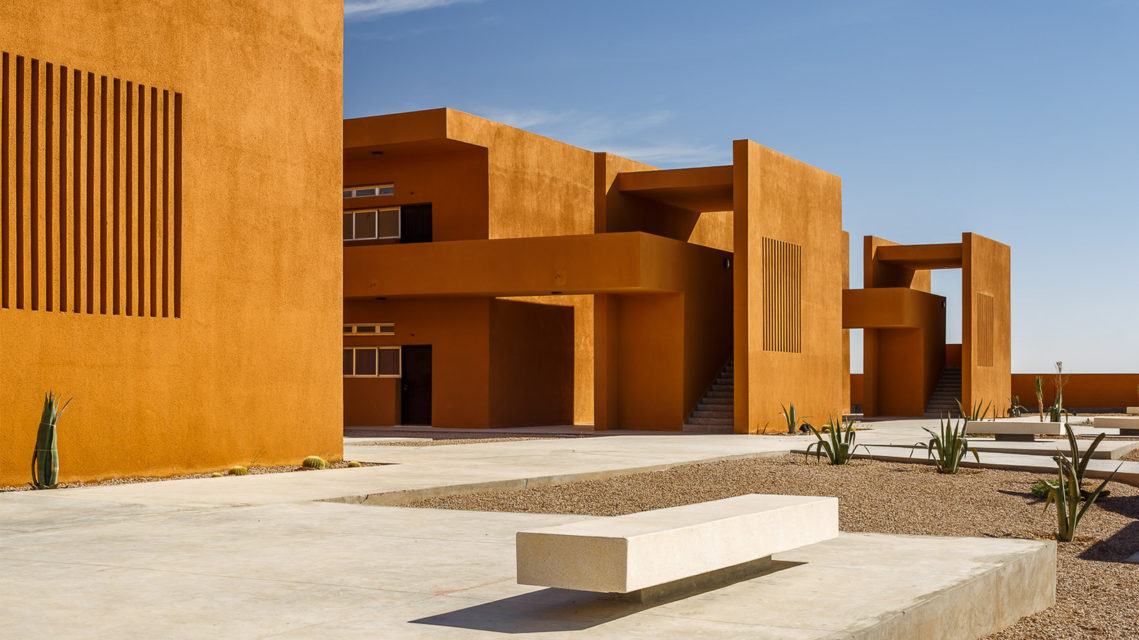 Large bold shapes, vibrant colors, perfectly captured repetition, contrast through lighting and color, and a whole lot of texture; This week’s featured project is a shining example of visual hierarchy at work.

In the small Moroccan town of Laayoune lies the Universite Ibn Zohr. This academic building was photographed for architects El Kabbaj, Kettani, & Siana by Doublespace Photography, a duo based in Canada.

Let’s start with this zinger. There are so many great technical aspects of this photograph. The orangey-yellow facade contrasting the cool blue sky creates great definition and differentiation between the university and its surroundings. The way the facade is illuminated by the harsh Moroccan sun draws our eyes straight to it. The motion created by the repetition carries our eyes throughout the frame. Look at the way the building is nestled in the empty space of the sky, created by the edge of that massive cloud. Top marks for this opening shot!

The Doublespace team knocked it out of the park on the timing of this project. The hard shadows are what really sets it apart. A product of the building’s blocky facade, crisp angular shadows enforce the complex geometry the University.

What a great set of vignettes. On the left, the shadowed wall and overhang frame the lit bits of the building nicely. On the right, the use of a model helps us understand the scale of the details on the University’s exterior. I love how properly this is done by the Doublespace folks. He’s just blurry enough to not be overly-distracting, but he also isn’t a mushy formless ghost. There is definitely a sweet spot when introducing motion blur to figures in architectural photography. This is a perfect example.

Look at how the bright sunlight pulls out the texture of the building materials. The pockets of shade show the functionality of this space. The building has been designed to be used as a haven away from the hot Moroccan sun.

There is just something about this particular image that renders it my favorite from this particular project. The colors are so rich. The lighting is interesting. The angle shows the dimensionality of the building. I love the ever so slight gradient in the sky that rolls from pale orange to blue, complimenting the color of the University.

As the sun begins to lower in the sky, the shadows begin to elongate, creating a bit more drama in this series. Between the tones and the lighting, the project begins to take on a very graphic and exciting feel. Our photographers employ an awesome use of framing using the building in the foreground. This serves as a visual anchor since we are familiar with the slats on the facade from the earlier photographs. It shows how the different buildings on the campus sit in relation to one another. It also highlights the continuity of the shapes echoed throughout this project.

As the sun continues to set, the Doublespace team is able to capture the way that the exterior picks up the sunlight and reflects an even more punchy golden tone. Here, the model shows the usability of the space and contributes to the fun feel of the repetitive design elements. I appreciate their addition of a human element even though Amanda – one half of the Doublespace squad – noted that they had to photograph on the weekend due to privacy issues and to avoid getting students in the shots.

Now that the blistering sun has set, we are in for a little surprise. The repetitive design elements on the facade are actually windows. On the right, we see that despite the lack of sun, there is still an interesting lighting pattern on the facade courtesy of well-designed lighting. It’s great that our photographers have harnessed the soft twilight to show these features that we may have missed.

Here, a wider plane of view is used to show off the massing of the University as well as its simple landscaping. The orange buildings pop against the soft blue sky. What an awesome series on an academic space!

A big thanks to Amanda and Younes at Doublespace Photography for sharing their photographs of Ibn Zohr with us! They feature such a wide variety of architectural photography from around the globe in their portfolio and on their Instagram. Go forth and check it out!