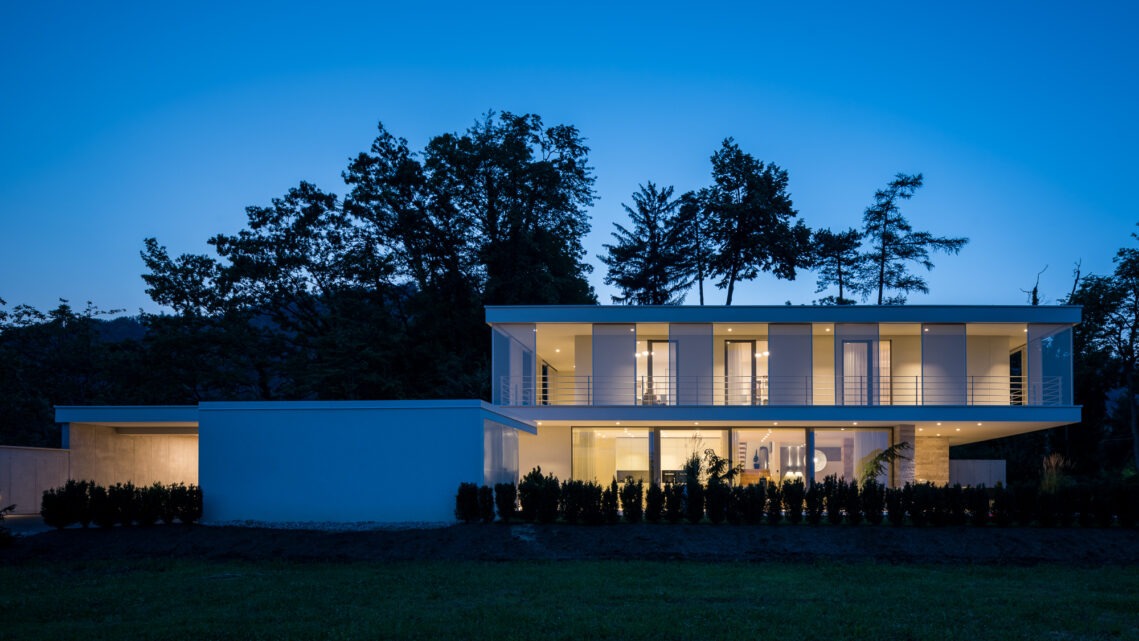 When I wrote the first part of this series, I intended to only talk about post-production, but the way I tend to photograph projects affects a lot of my post-production techniques. I’m the guy who likes to shoot as many angels as I found interesting enough to photograph, which ends up being a selection nightmare as I sit in front of the computer. It boils down to a simple fact: I need to be quick in post-production to retouch the large amount of images I make.

So, for those of you who have been waiting for the “next step” after the first article in my post-processing series, this may seem like a step backward, but I think you’ll find some helpful intel here. In this article, I will show you one of my favorite residential projects from last year — a house is in Graz, Austria.

This project was a 7-hour drive away from my home in Ajak, Hungary. When I’m working in Austria, I always try to aim for a two-day shoot, especially on those long summer days. I usually arrive around 1 p.m., shoot until dusk, start again before sunrise, and around 10 o’clock, I’m done. Then I’m available for another project, or I just drive back and arrive home early enough to pick up my little daughter at kindergarten.

So I spent two days — roughly 12 hours — at this particular house, which was broken up in two parts. That allowed me to get familiar with the place, look for compositions, and not be in a hurry. The gear I was using on this shoot was my trusty Nikon D810, Nikon 19mm TS, Nikon 24mm TS, Nikon 1.7x extender, as well as my Nikon D750 with Nikon 50mm 1.8G and Sigma 105mm Macro (for closeups), a Camranger, and a DJI Mavic 2 Pro.

Preparing for the Shoot and My Photographic Process

Let’s talk about logistics. At the beginning of the project, I hadn’t even met with the architect yet, but somehow gained his trust to shoot his work. After the building was complete, the architect visited the house and took a few iPhone photos, which he sent over to me to give me an idea for the scale and perspectives that he gravitates towards. The architect also sent over a document that explained the house’s main features, which gave me insight into the important elements that the architect would want to see highlighted in my images.

Every time I’m on a shoot, I try to ensure that the architect has their required image material but also, that I take photographs that would interest the primary builder and other professional contractors (window, shading, furniture, floor, and tile manufacturing companies) as well. I do this even if they express that they are not interested in cost-sharing on the shoot in the first place, just because it usually pays off later to have the required perspectives and set of images or to have that one detail in addition to the main set of photographs I make. If the additional contractors do end up being interested in purchasing those photographs, all I have to do is develop and export the appropriate pictures and issue the invoice. This may sound a little weird, but if you want a really well-run business then you need to think ahead and make sure you aren’t missing out on easy opportunities to make more money and gain more clients.

On Location – This is How I Work

Note 1: I want to highlight that there isn't an end-all-be-all perfect way to photograph a project. There are many different approaches that succesfull photographers are using according to their style.
Note 2: If you are viewing this on mobile, it is maybe better to propone reading this until you're at your computer due to the sheer amount of photos and co-insiding captions :)

Let’s jump on it. When I arrive on location, I like to walk through the house for the first time. By the time I’m finished, I’ve started to come up with ideas and have a good handle on which rooms/images will be light-dependent and in what order. For example, when I arrived, the sun was already beyond the point where it could directly shine into the rooms, so this ranked them behind the exterior shots, where I had around an hour left before the sun turned away from the main facade.

When I started writing this article, I thought this would be about post-processing, but before we get into the nitty-gritty of Lightroom and Photoshop, I have to share my thought process from the time I arrived until I packed my bag. I found my first good composition pretty soon after arriving, which ended not as I expected.

During my first round outside, I looked for interesting compositions, regardless of the current light situation. In this way, I got familiar with the design and the main views of the house, then around sunset, when I had a narrow window to photograph, I knew exactly where to put my camera. With this practice, I was able to create sets of images to show how the house looks at different times of the day. Here is an example:

On to Photographing the Interior!

My favorite time to photograph interiors is the early morning and late afternoon periods when the sun is low and casts beautiful long shadows into the rooms. However, if I am photographing a very simple and restrained interior with huge windows, I also like to take advantage of the periods when the sun is not shining directly into the room. This house’s entrance has a giant window that frames a beautiful tree, almost like a painting in the garden. When the architect sent me his photos, this area grabbed my attention first.

On to the next room! Typically I find that bathrooms are a challenge to photograph. They are usually cramped and filled with mirrors and reflective glass which is a nightmare combination, but since interior designers spend so much time on them, it is necessary for us to be able to represent them pleasingly. One tip I try to keep in mind when photographing bathrooms is from Barry MacKenzie on the BAAM podcast. He mentioned that our first reaction when shooting a small space is to put on a wide lens, but, “the smaller a room is, the longer the focal length should be” — here is an example in the children’s bathroom:

Here are my shots of the master bathroom. Check out how I select my favorite compositions:

Now you can see how huge of a difference it makes when you shoot at the right time of the day. Here comes the next example, the the master bedroom and my choices:

Sometimes kids rooms cause some headaches too. There are many toys and things that you don’t really want to see in the images. If I don’t have time, I skip these rooms from time to time, but if I’m there for a full day, I will take one or two photographs for sure. Two wide-angle shots tell the story, and you can place the room on the layout right away.

This house has a very simple living room with a giant couch and a nice concrete wall. That’s our next stop:

The staircase was quite attractive, and I have one image in my mind when it comes to a floating staircase. I tried the same thing here. These two images were taken to demonstrate what happens if you step back a bit with a 24mm TS + a 1.7x extender instead of the 19mm wide-angle lens.

Now we’re moving on to my favorite part, the kitchen — honestly I would pick all of these for different reasons.

It’s hard to put into words how kind of hosts the owners were. I photographed the wife in the afternoon when she brought the lemonade to our dinner, and in the morning, the husband was making our morning coffee.

Prepare for Launch! – Images From Above

Let’s go outside. This is my selection of drone images. The goal was to present the house with its surroundings while also showing some interesting views of it.

I was almost done for the first day, and my assistant was still flying around with the drone (it was a late blue hour) and took some images. I didn’t expect anything from them, because it was quite dark when he landed. If you see them from a conventional architectural photography standpoint, they are not acceptable, perhaps, but if we live a bit with our artistic freedom, we can add them to the series as part of a decision because we think they highlight certain things. These are my personal favorites.

During the afternoon, I focused on the interior since I knew that the light would be much better in the morning, and I started photographing the exteriors right after sunset. First, let me show the main views of the house. I won’t share every single angle I tried, but now you get the idea of my approach. After 6 hours on the field, we are at the early blue hour:

Moving forward, I ran even on the roof to capture the view of the city.

After 5 hours of sleep here we are, sunrise!

Now I will get into some details of the house that I felt worthy of photographing. The first thing you saw is the nice open garage, which can be photographed beautifully.

The most unique parts of the house are these large displaceable elements, which the architect highlighted in his letter before the photoshoot, so I felt it is important to focus on these in a few photos.

Since I knew from the very beginning that the windows and doors were installed by one of my long-term clients, it was obvious for me to create some images for them as well.

Here are the details I directly shot for the window manufacturer company:

Since this was the coolest installation of a pool, I felt obligated to showcase that too.

Our clients often ask us to do some vignettes, but these are the images I rarely put on my website or post on Instagram. Now I want to finish this set and this article with some of my vignettes of this house.

I started the article with a note; please keep that in mind. There is really no one unique way, or holy grail for the approach of an architectural photographer; you have to figure out a workflow that works for you and those you want to work for. Mike Kelley and many others are working much slower than I, enabling them to make each of their submitted photos world-class quality. To those standards, my images often lack that last final tiny touch: the missing Vespa or that I left the round carpets in one scene, and the grill outside are great examples of this. These are things that typically only other photographers will ever notice, and I am training my eyes to recognize such situations even faster and avoid similar “mistakes” in the future. This is also a key to your success, a bit cliché, but there is a hard truth in it: learn from your mistakes!

Stay tuned for the next chapter, in which I will show you what became the final selection for the architect and how to work them out in Lightroom.

Oh! I forgot to mention that my assistant is a brilliant cinematographer and we also made a short film of the house.