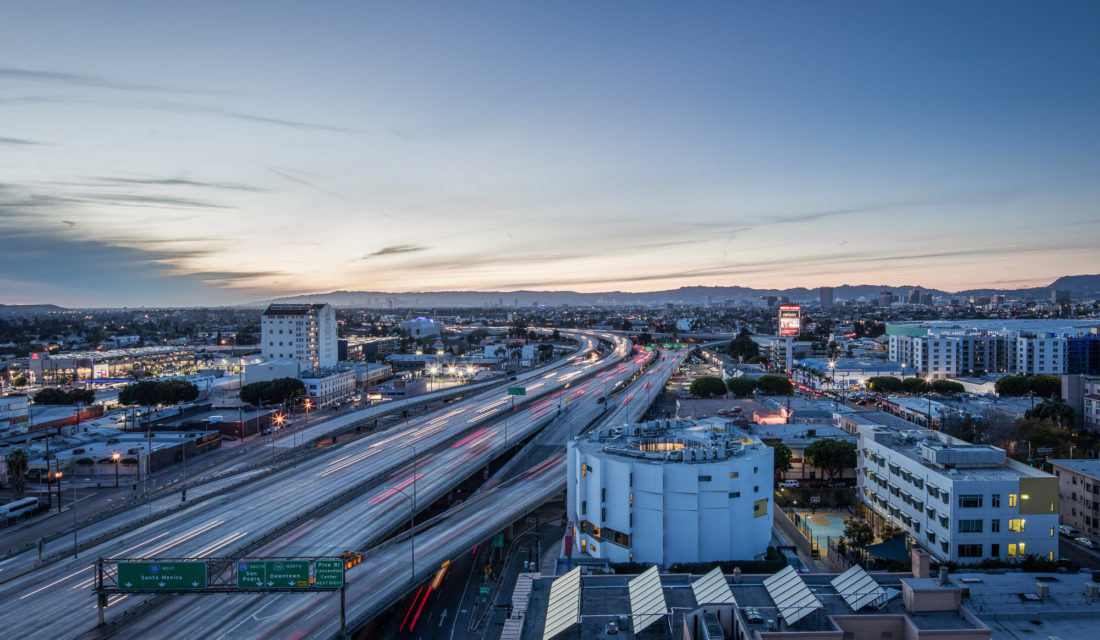 Any photographer who has tried to take pictures in any moderately urban environment is familiar: the security guard, keeping us safe from the “terrorists” with cameras, protecting the interests of “the man” from purported “liabilities,” and whatever other nonsense boogeyman they’ve dreamt up that doesn’t exist. The success of your shot can hang in the balance of a security guard who just doesn’t care, and I’ve had plenty of instances where that’s been exactly the case.

So when shooting Michael Maltzan’s New Carver Apartments project in Los Angeles, I was faced with a bit of a security guard conundrum.

I had already spent a full day photographing the building – capturing ground-based shots, chasing the light through the inside and outside, and even attempting to get a final money shot – at twilight, of course – but it ended in a total crash-and-burn with me going home pretty disappointed. Mostly because I didn’t want to contend with coming out on another day to get this shot, but also because the punk ass skateboarder in me can’t take being told no for an answer – and I had to find a way to get that shot.

The final image I had in mind was pretty simple – elevated, showing the project in context – surrounded by the sprawling city of Los Angeles, adjacent the infamous 10 Freeway, a bird’s-eye view of the entire building. Since I’m a sucker for a good twilight, the light trails and setting sun to the west would provide a striking pastel color palette that would liven up the, er, bleak landscape of LA’s density.

But what stood between me and that final picture was security guards. Ugh. Now, I don’t fault them for doing their job, they’re just trying to make a living, and I’m sure outside of work they are perfectly reasonable, decent, human beings…but all logic goes out the window in their work domain.

On my first attempt, about 30 minutes before twilight, I pulled into a parking garage about 500 feet away from my subject, begrudgingly took my ticket that cheerfully proclaimed “first 15 minutes free, $4.00 per half hour thereafter” from the little machine with the button that never works, drove my car around and around, slowly ascending the labyrinthine bowels of this concrete beast, the icon of Los Angeles. The 11 story parking garage became emptier and emptier the higher I climbed, until a chain barred me from entering the upper levels of the garage. I can only assume this was long-term parking for a car rental company or similar, but it didn’t really matter, as I was just three floors from the roof and could hoof it up the rest of the way.

I stepped out, popped the trunk, and started building my camera – tripod legs first, camera, lens, remote. Locked and loaded, and up we went to the top. Ah! A magnificent view. I took a few moments to admire my ingenuity in finding this place, and began to set my camera up. Not before I had barely leveled it and taken a test shot, the all-too-familiar “Hey, kid!” rang out across the top of the deck.

“Yeah, you need to pack it up right now…”

Gritting of teeth, deep exhale, rolling of eyes, frustration! I sulked back to the car with exactly one mediocre, misfocused, overexposed image from the parking garage.

But! There was a bright side to all of this. I knew that this camera position was pretty much exactly what I needed – a one point perspective straight off the top floor, I just needed to get the time of day right to make it happen. Armed with that knowledge, I concocted a plan that would ensure I got the shot.

Parking my car at street level this time, I built the camera on top of my mini-tripod – a RRS travel tripod that’s about 18 inches long with a compact head. I focused on some building a few hundred yards down the street, basically infinity anyway, and gaff taped the focus ring in place to make sure it would not move.

I thumbed through the menu and set my camera’s auto-bracketing mode to 3 shots, +/- 1 stop from my base exposure, which was f8, half a second, ISO 200 (my go-to twilight setting). As I know the exact composition that I wanted, I opted to ditch the remote control, and set the camera instead to a 2-second timer. This would allow me to push the shutter and let the camera stabilize before taking the long exposure necessary to capture everything in one go.

At this point in my life you can put me anywhere on planet earth and I’ll know when the absolute perfect time to shoot a twilight is, so it was just a matter of timing my hike up the 11 floors (I wasn’t giving these people another nickel!) and making sure I was there in the exact moment in which the remaining ambient light was just as bright as the interior lights from my subject. Bonus would be some nice light trails from the cars on the freeway, but I wasn’t trying to get greedy.

Five minutes before the perfect twilight moment, I started my trek. I put the camera, attached to a tripod, with all my settings dialed and ready, into a Trader Joe’s canvas bag that had been living in my trunk for at least six months, and started humping this absurd setup 11 stories up to the top of a dark parking garage through an empty and unlit staircase that smelled like car exhaust and dried urine. Gross.

Ah, the top! I gasped for some much needed fresh air. I scurried over to my corner, slung the bag around and took the camera out. Setting the tripod on the ledge and leveling the camera in one fluid motion, I pushed the shutter and immediately heard:

“Hey! You! No photography here!”

As soon as registered what was going on, the sweet sound of clandestine shutter action began:

Feigning deafness – “what? Oh – the camera? Sorry! Didn’t know. My bad. I’ll find another spot. No problem, man, don’t want to get you in trouble…”

I threw the camera back in the Trader Joe’s bag, and happily walked back down the darkened stairwell with the security guard not far behind me. What he didn’t see was the shit-eating grin on my face-and the knowledge that one more project for the book was, pun intended, in the bag.