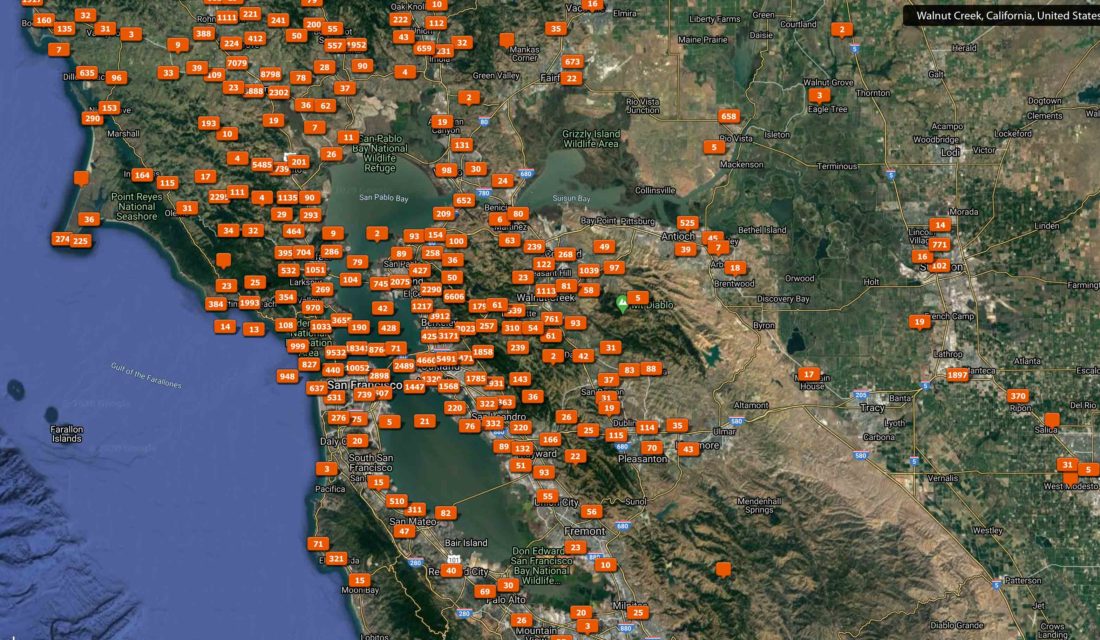 San Francisco photographer Peter Lyons has been working all over the Bay Area for years now, and since the advent of cameras using built-in GPS, he’s geo-tagged nearly every photo he’s taken. Peter recently shared a screen shot of his work history and I was blown away.

As far as I’m concerned, Peter embodies the image of a classic working photographer. Not a lot of drama or pretension, just hard work and consistency. Peter shoots a good mix of architecture photography for interior designers, architects, developers, and realtors, and I’ve never seen him scoff or turn his nose up at a job. In addition, he’s an avid sailor and spends plenty of time working on personal projects that involve getting out on the San Francisco bay to photograph sailboats, races, and other water-bound activities that my land-lubbing brain cannot accurately describe (check his personal work out here!).

Anyway, I was absolutely floored when I got my first look at Peter’s GPS map; not only does he get it done but he is getting it done all over the damn bay so I had to inquire and ask about his method for geotagging. I wish I had gotten on this train earlier but it feels like I’ve been sleeping on a great technology which I had initially written off as a gimmick.

Here’s what Peter has to say about it, as well as a few images to illustrate how he uses GPS tagging in Lightroom.

My tagged photos have been shot on a number of cameras, which comprise all I’ve shot on these past five years:

I’ve included a couple wider views of the SF Bay Area. Then as I zoom in, the tagging becomes more specific and granular. Lightroom clusters the tags based on the scale of the map; it’s pretty dynamic. Of course it’s not 100% accurate. Every now and then a bedroom in Berkeley will show up in the Sea of Cortez, but those are the very rare outliers. In practice, I’ve found the tags to be very close to the real location to enable me to find what I’m looking for. Zoom in close enough, you’ll find the GPS signal may drift within a radius, but pinpoint accuracy is not needed. Even if not all the shots in a set are perfectly geotagged, finding a few shots on the map lets me find the folder where the full set is located, so the job gets done.

You’ll see I’ve also included some tighter zooms of neighborhoods. If I hover over a tag that says it contains, say, 25 photos, I can click on the arrows to scroll through the individual shots in the set, still right there in the expanded map tag. If I double-click on a shot in the tag, it takes me to a full-screen view of that shot in the Develop module. Click G to go to Grid (library) view, and I can see that photo in the overall library, sorted in whatever order I’ve asked (typically by date/time). So all of that shot’s buddies will be right there. At this point it’s a simple matter to find all related photos in the catalog, or in the finder.

Some of my later screen captures are a useful real-world application for me. I’ve shot quite a number of units in this massive condo development on the Emeryville waterfront, on San Francisco Bay. But I’ve only once flown my drone there, any every time I need to deliver a set of photos from that community, I want to deliver the drone shots along with it, and maybe some from the waterfront trail, too. The LR Map view allows me to quickly locate those photos and the related ones so I can export and deliver them. Without the map view, I’d literally have to look at my calendar, look for other street addresses in that area, find those folders, and look for the one time I flew the drone, or shot neighborhood restaurants, or the local parks, or whatever. Forget that!

Oh, I guess I should add, the map view displays tags only for the selected portion of your catalog. In these examples I’ve sent you, my entire catalog of about 400K photos is selected. Half of them are older and not geotagged, but it’s still a huge set. If I were to select only commercial photos from 2019, the map would be much less congested.

It’s really cool that Peter is able to quickly find geotagged images of a specific building; I imagine for licensing and re-selling of many images this can be wildly profitable. I know I’m going to spend the rest of my morning looking into GPS tagging my images, though sadly it doesn’t look like my camera of choice (Canon 5dsr) has a GPS function built in.

Many thanks to Peter for sharing his images with us!