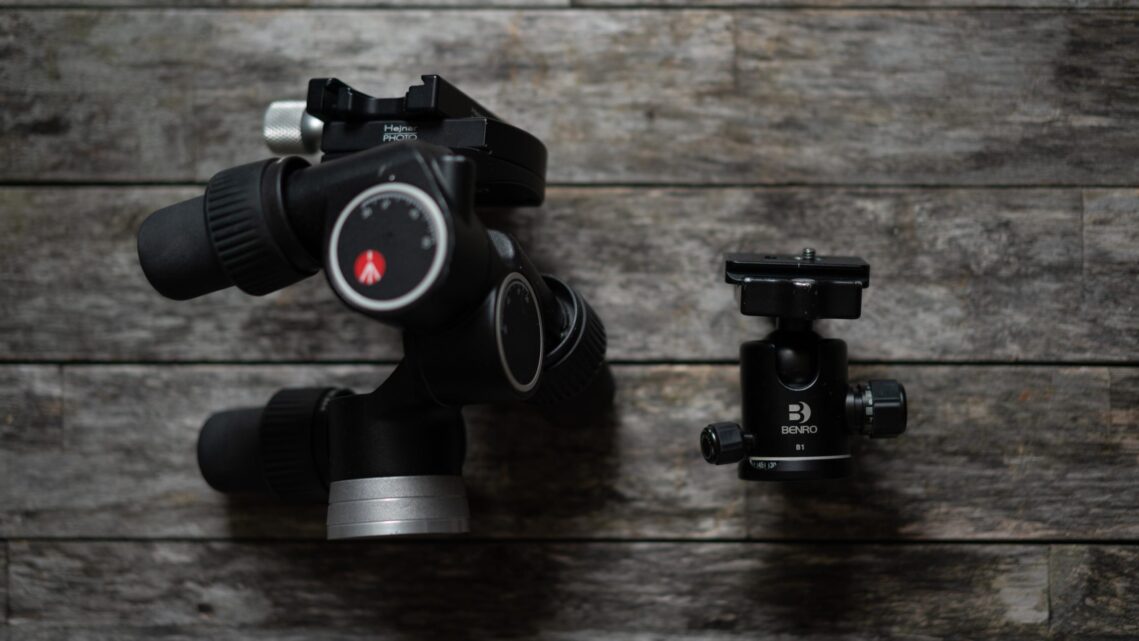 One of the key advantages of a ball head is that they’re relatively cheaper compared to some geared heads. A good example and one of my favorites is the Benro B1. This head offers a great deal of control and has a fantastic weight limit of up to 12kg. This is extremely useful because you put mount larger, heavier cameras systems without any issues. The B1 is actually one I personally own and use regularly for a couple of reasons. For one it’s small and doesn’t make the overall size of my tripod unwieldy and difficult to carry. Coupled with the Manfrotto 290 Xtra Carbon fiber gives me a super light, full-length tripod system that I use regularly when traveling and filming. The other is that the B1 is priced at less than half that of the “entry-level” Manfrotto 410 geared head.

Unfortunately, it’s less than ideal for architectural photography because it simply doesn’t offer the precision control that a geared head does. There have been several occasions where using this ball head has resulted in images that are just slightly off when it comes to the verticals or it’s not quite level. Making minor adjustments are tricky because as soon as you loosen the lock or tension there’s a chance the camera will simply fall over to one side or you’re having to hold the camera with one hand and then make slight adjustments with your other and it;’s just not a comfortable or precise system. For this reason, I will only ever use a geared head when shooting architecture.

The main issue with a geared head is that they tend to be more expensive than the average ball heads, and cheaper geared heads tend not to be great for a couple of reasons. For example, the Manfrotto 410 Junior is a really good entry level head. Unfortunately, it’s not the most comfortable head to use and can be quite fiddly as over time the rubber knobs and gears tend to degrade. In addition, it’s not extremely light in comparison to many ball heads you can buy for less. Of course, you can upgrade to the Manfrotto 405 which is significantly better when it comes to comfort and ease of use. The problem is this head is also much larger and heavier. There is also the problem of having to use Manfrottos proprietary plate mounting system which in my opinion is just terrible. If you are planning on using the Manfrotto geared heads then you may want to change the mount to the Hejnar Photo adapters for Arca mounts.

Arca mounts are far more flexible and have a much wider range of accessories and mounting options. Take the L-Bracket for example, the Manfrotto version is hands down the worst L-Bracket I’ve ever used. It’s huge compared to any Arca L-Bracket I’ve used and it’s the most finicky plate system I’ve ever used. The other issue with Geared heads is that the Manfrotto ones which are effective the cheaper versions on the market tend not to be able to hold as much weight as many ball-heads. This isn’t a major problem though because, for the most part, I’ve never needed to mount anything above 5kg onto my tripod. However, if you are shooting with a medium format system or larger then you may want to look are the more expensive Arca Swiss geared heads.

In my opinion, I think the Arca Swiss D4 tripod head is probably the best premium option. It’s beautifully designed and weighs much less than the Manfrotto option. The D4 can also hold up to 34kg which is simply incredible. You could comfortably put on a large format camera system and have no issues at all. These tripod heads are quite pricey relatively speaking but they do offer some of the best in terms of build, design, and usability. Another option is the Arca C1 Cube, which is another step up from the D4 but many consider overkill. Mike does a nice review of the C1 Cube vs D4 which can be found here.

This video below from Rich Baum does a great job of comparing various geared and ball heads that are on the market today. Baum compares some of the more popular heads that architecture photographers are using such as the Manfrotto 405, 410, and Arca D4. Rich also brings up a new tripod that many photographers haven’t considered – the Bogen/Manfrotto 3046.

Ultimately, it can come down to your budget but as Baum discusses in his video, buying cheap is generally not the best option. The reason for this is because it’s somewhat of a false economy. You may save some money in the short term but the downsides can be significant. If you don’t mind the weight and size then the Manfrotto 405 is a brilliant tripod head which has served me very well for more than half a decade so far. IF however, you are looking for the best tripod head on the market then you may want to start looking at the Arca Swiss option. In any case, although Ball heads have their respective advantages they’re simply not the option I would recommend for this type of photography.