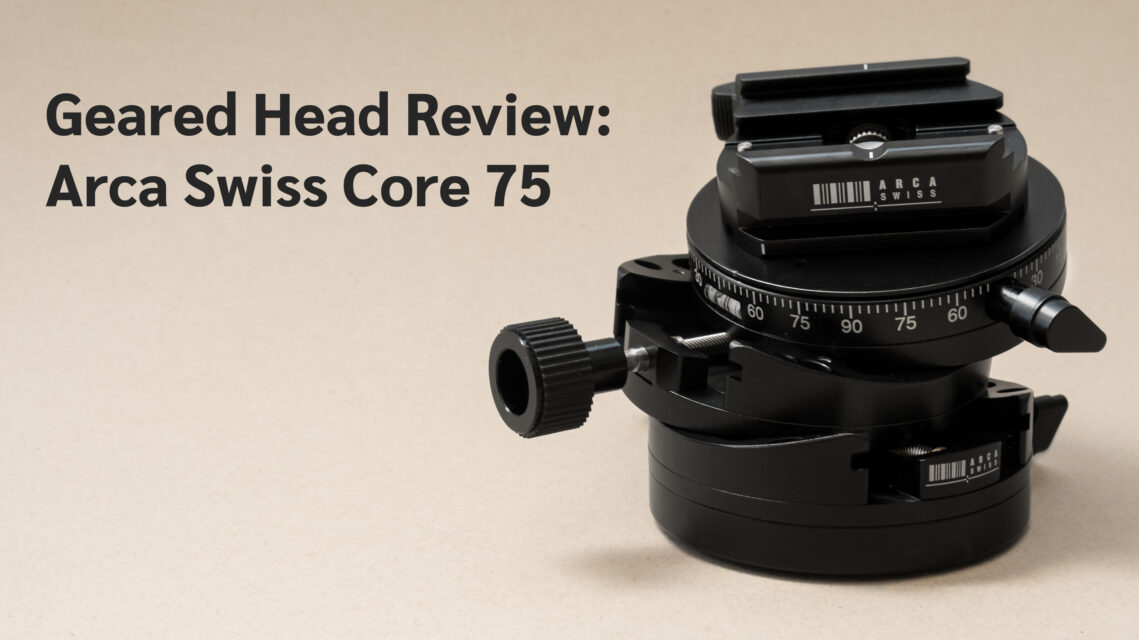 Finally! A review of the latest Arca Swiss geared head — the Core 75 — a.k.a the mini-cube, or the cylinder. The Core 75 is a strong contender to join the ranks of the ultimate geared head among the D4 and the C1 Cube.

Even with the amount of marketing around the Core 75, it is still difficult to find accurate information or a review delving into its features and functionality. In addition to sharing my initial impressions, this post aims to answer some questions that photographers interested in acquiring this head may have.

Scrolling through listings from retailers and the official Arca Shop alike immediately raised some doubts in me. The photos are not consistent or they show a wrong item, which can be misleading. If you are buying a premium product you want to have the most accurate information.

My biggest concern before buying was regarding the bubble levels. Nothing can beat the visual feedback and accuracy that two cylindrical levels provide. However, the photographs of the product show two versions: one with two cylindrical levels and another with a single bullseye level. The latter is not very useful as the mounted camera hides it from sight.

Unfortunately, the support staff was not able to clear up my doubt. So I googled “the first name, + city + architectural photographer” of one of the buyers in hopes of contacting him … and I was successful! So here’s a special shootout to fellow Portuguese architectural photographer Claudio Parada who promptly replied and shared some photos that confirmed two cylindrical levels on the Core 75!

With all doubts cleared up, the decision was made and I ordered mine.

Note: Support staff later confirmed that earlier versions of the Core 75 came with one bullseye level. The current version ships with two cylindrical levels, however, some of the listing photos might not be updated yet.

The Core 75 is a cylindrical geared head intended to be used in conjunction with an L-bracket. The design keeps the camera centered over the tripod, which improves the overall stability and allows the user to switch between horizontal and vertical frames without moving the tripod. The head has a diameter of 75mm (hence the name), weighs 630 gr, and has a load capacity of 30 kg (66 lbs).

Gear knobs provide precision movements up to ± 15° within an arc on the X and Y axis. They are fairly big (Ø 2cm / .8″) and rubberized. Also, they have a “telescopic” function, you can pull them out in case you are using a big camera or approaching the tilt limit.

Additionally, there are two panning “panorama” plates. One at the bottom and the most important one at the top. I can’t stress enough the genius of the top panning plate. Once that the camera is leveled you can just rotate and recompose the shot while staying perfectly on level. This is especially useful for uneven terrain or shots in tight spots where your tripod legs are not extended equally.

The Core 75 is a bigger version of an existing Arca Swiss head: the Core 60. Besides the amazing bubble levels on the Core 75, both heads are similar in design. Here is a table with the main differences:

The flip-lock mechanism: My savior

Most Arca Swiss compatible heads work with a screw-type knob: place the plate onto the clamp and turn knob until it is tight. Easy right? Yes … until you forget to tighten the knob all the way. Due to an unfortunate experience, I decided to pay the difference and go for the flipLock mechanism.

The flipLock mechanism has three positions. Position one is for releasing the camera from the clamp. Position two tightens the clamp but allows sliding, and finally position three: absolute safety lock.
In order to release the camera, you need to pull back the metal pin on top of the lever and get into the sliding position. Once there you must pull the rod with your fingernail (or just your finger side if you have small hands) and turn the lever into the release position.

Is it slower? Maybe. But then again architectural photography is not about speed. Besides, there is a pleasant feeling of hearing that double click confirmation and knowing that my camera will stay in place this time.

This is my first Arca Swiss product ever. The build quality, precision, and looks of the Core 75 are fantastic. The two cylindrical bubble levels and top panning plate are my new favorite features. It is simply worth the money. As Mike said regarding geared heads in the original Arca Swiss review “You’re going to use them for literally every single picture you make – you want it to be a pleasant experience.”

If I had to point out something, it would be that it is a bit bulkier and heavier than I originally thought. At 630 gr is not the lightest head on the market but it does feel balanced and straightforward, even on my travel tripod. The combined weight of my tripod + Core 75 sums up to only 2040 gr. So, not that heavy, and yet stable.

Another limitation is the fact that you can’t shoot straight up. Some L brackets allow to invert the L so that the camera ends up pointing up (usually hex keys are involved though). Personally, I’m keeping my old ball-head as it is light, and I can throw it into my bag in case I need to switch.

The Core 75 is an overall amazing head, and close to perfect for me. If I could just shrink it a bit it would be incredible. Perhaps a renewed Core 60 with cylindrical bubble levels and increased tilt range would do the trick. That would be my ideal geared head!

Do you own a cylinder-type geared head? Arca Swiss or not let us know in the comments below!