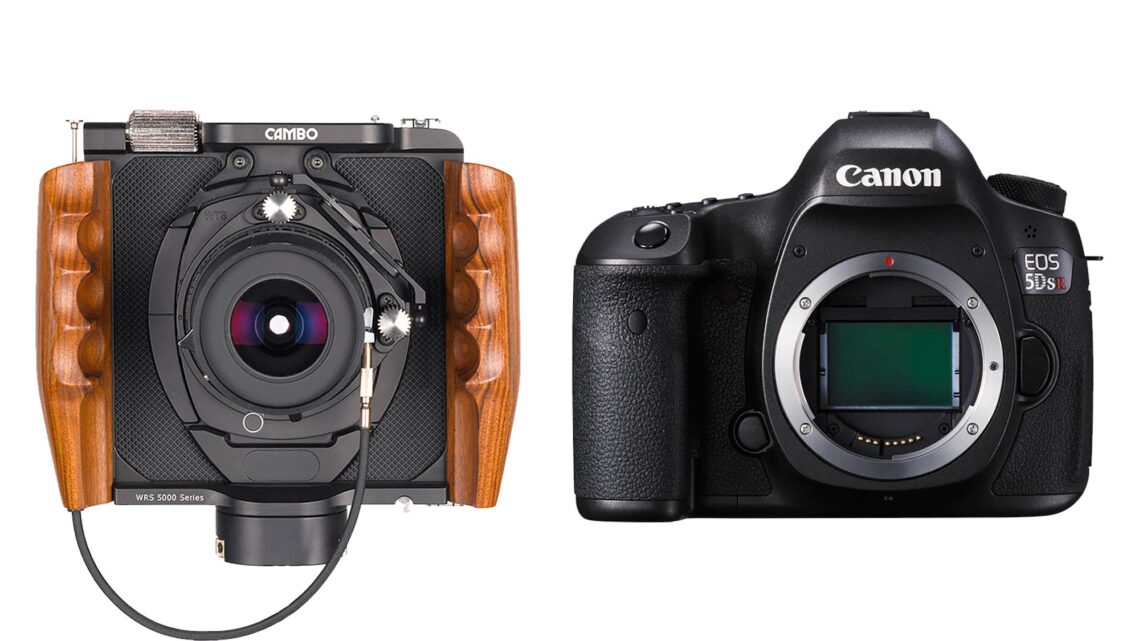 Cameras like the Phase One XF system and the Hasselblad H6D offer some the largest commercially available digital sensors currently on the market. Generally speaking, larger sensors tend to offer better image quality; this isn’t explicitly true but for the most part, it’s what most people experience. The question is, are medium format cameras the absolute best option for architectural photographers?

A couple of years ago I compared the Canon 5DSR with the 24mm TS-E to the 100mp Phase One technical camera coupled with the Rodenstock 40mm f/4.0. The Phase One system costs more than 10 times that of the Canon combination. Now, of course, I understand diminishing returns and I wasn’t expecting 10 times better results, however, I was expecting better results than the lowly Canon system. Unfortunately, in various comparisons, the Canon system came out on top in several categories. This was especially apparent when it came to lens sharpness; the Canon 24mm tilt-shift was noticeably better at almost all equivalent apertures. Even with the higher resolution of the Phase One sensor, the Rodenstock lens just couldn’t outperform the Canon lens. This result not only came at a surprise to me but, I was disappointed because I was actually planning on upgrading to the medium format system. Since then I’ve been looking at medium format with a little skepticism. For that reason, I wanted to discuss whether or not medium format is actually the best option for architectural photographers.

I’m pretty sure you know where I’m going with this one; just because something is touted as being the best doesn’t necessarily mean that it’s going to be the best option for you. One of the things I’ve noticed with medium format cameras is that per picture you’re required to spend a significantly greater amount of time. Now people who shoot with medium format will tell you that this is a good thing because it slows you down and gets you to think about the shot, but I’m not convinced with this argument. Slowing down the way you shoot and how you envision the scene is something you can do without equipment slowing you down. If for example the WiFi on your Camranger wasn’t working and that was slowing you down, you wouldn’t classify that as a benefit, would you? You wouldn’t say that was making you think about the scene, would you? No, of course not, in fact, that would be preventing you from actually thinking about the shot and instead you’d be faffing around trying to get your Camranger to work. In the same way, medium format cameras slowing you down isn’t a benefit, it’s a flaw. The amount of time you have to spend performing black calibrations and lens cast calibrations really eats into the time you have to actually photograph the scene. Couple that with the fact that most larger sensor medium format cameras and especially technical cameras are rife with bugs and glitches; meaning that you’re spending an inordinate amount of time battling the equipment rather than actually performing your job. Clients don’t pay you to figure out camera flaws they pay to get the job done.

If you want to slow down, you can do it just as easily with a DSLR and a computer. Shoot tethered to slow down and really pore over details, rather than just using a bigger camera. The process should be what’s slow and deliberate; the act of using a camera isn’t what should be slow and deliberate, it should be as if it’s almost not there at all. This is where DSLRs excel and larger formats struggle.

The equipment’s footprint is also something to consider. Most medium format cameras that are suitable for architecture are significantly larger and heavier than their full-frame counterparts. I’m in no mood to have to carry lots and lots of bags for a shoot. Personally, I love the relatively smaller and more compact size of full-frame cameras when I go to a shoot. For the most part, I’m able to complete large scale shoots with just one Pelicase full of gear and a tripod. I prefer to travel light because it’s impractical for me to have to take absolutely everything I own to every shoot. Over the years I’ve built the experience to know what I don’t need to take on shoots rather than what I do. This is something that takes time to understand but once you know what you’re capable of, you’ll know what gear is appropriate and when.

Image quality is the main focus of medium format cameras. I agree that medium format cameras generally have better image quality compared to the best full-frame cameras. Aspects like colors and dynamic range are where the larger sensor tend to perform much better. There are currently no full-frame cameras that offer the ability to shoot 16-bit raw files. That extra tonality is actually very useful and just based on that I’d say that medium format cameras may actually be worth the cost depending on what you shoot. Once again this is subjective in that it depends on whether or not you need that extra range of colors. Personally, I’ve found that simply by using a reference tool like the ColorChecker Passport, you’re able to close the gap quite significantly. Reference tools don’t increase the color range, but they do help with accuracy. Having said that, using a ColorChecker Passport with a medium format camera will almost always produce better results than a full-frame camera.

In addition, lenses make far more of an impact on image quality than an extra stop of dynamic range. This could be debatable but in my experience lenses like the Rodenstock 40mm don’t really perform as well as you may like to think. Sure they’re great in many regards, but, compared to several Canon tilt-shift lenses they simply don’t offer good enough value for money. This is especially true when you’re looking at the 24mm tilt-shift or even the latest 50mm, 90mm and 135mm lenses that are available for Canon. Yes, Rodenstock lenses are brilliant, but when you’re shooting at equivalent apertures, they actually demonstrate more diffraction; thereby negating them as the “best”. In any case, I highly recommend that you thoroughly test and compare any medium format system before you spend any money on them. In many cases, the best full-frame lenses will probably outperform their medium format equivalent.

Almost all medium format camera will impact your workflow. As mentioned above, they tend to be slower and less effective in many regards aside from image quality. If you prefer to shoot while tethered, then options available for doing this wirelessly are severely lacking for most medium format cameras. For effective tethering you’ll be required to carry a laptop which can be a pain because that’s more equipment you need to carry. If you do a lot of light painting for your images then the limited tethering capabilities of medium format may cause a few issues, but for DSLRs you have several options available like the aforementioned Camranger. I love how easy it is to set this up with my 5DSR and then I can monitor all my images and control my camera using an iPad. Focus stacking can be done really easily too using the app and light painting is pretty much a breeze.

The larger file sizes will also impact your workflow, although I don’t really consider this to be a major issue. Having said that if you are working with lots of layers for any particular scene then the large file sizes may hinder your ability to quickly and effectively edit. A typical 100mp file from Hasselblad will cost your storage more than 200mb per image. Compare that to the 50mb files coming from the 5DSR and you can imagine how that translates over a long period of shooting. You may also be required to use proprietary software from medium format manufacturers to process the raw files properly and effectively. Software like Phocus for Hasselblad, for example, isn’t great. On the other side of the coin, with Phase One you’d be using Capture One which I think is the best raw processor currently on the market. Ultimately, I highly recommend you consider your workflow and how it could be disrupted before you spend lots of money on a medium format system.

Which System is the Best?

If I had to choose a specific medium format system for architecture, then I’d probably pick the new Fujifilm GFX 100. This camera is the cheapest 100mp camera on the market and offers a huge number of incredible features. The main reason I think this could be the best medium format system is that you can effectively adapt Canon tilt-shift lenses to shoot architecture. The angle of view will be slightly wider, but this can be a benefit depending on how you shoot. This camera is also significantly smaller and lighter than any other 100mp camera currently on the market. The sensor is slightly smaller than those available from Hasselblad and Phase One, however, this isn’t really a major problem especially due to the lenses available, both native and non-native. This camera can also shoot 16-bit raw files which as mentioned above is a brilliant feature. The only problem with this system is that it’s still a relatively new system and accessories like the Camranger are not currently available for it (and the current wireless tethering situation can be described as a joke at best). This can impact your workflow but that entirely depends on how you shoot. I think once this system matures and if Fujifilm develops native tilt-shift lenses then this could be the absolute best system for architectural photographers.

Just because something is marketed as “the best” doesn’t necessarily mean that it is. Image quality is just one small area to consider when purchasing a camera. Chances are none of your clients will be able to tell the difference between something shot on a full frame camera vs a medium format camera. The cost of these systems is incredible in comparison, and if you’re not going to make more money shooting with a medium format camera as opposed to a full frame camera, then what’s the point of buying one? Remember, the consideration you make when looking at the return on investment needs to be compared to whatever system you currently have. In other words, if you would have made the same amount of money using a full-frame system then you’re making a loss. Ultimately, this is a subjective and nuanced discussion which entirely depends on your requirements. Just make sure you’re not trying to convince yourself of something just because you want it or because the internet tells you otherwise. After all, some of the biggest names in the business are using DSLRs almost exclusively.