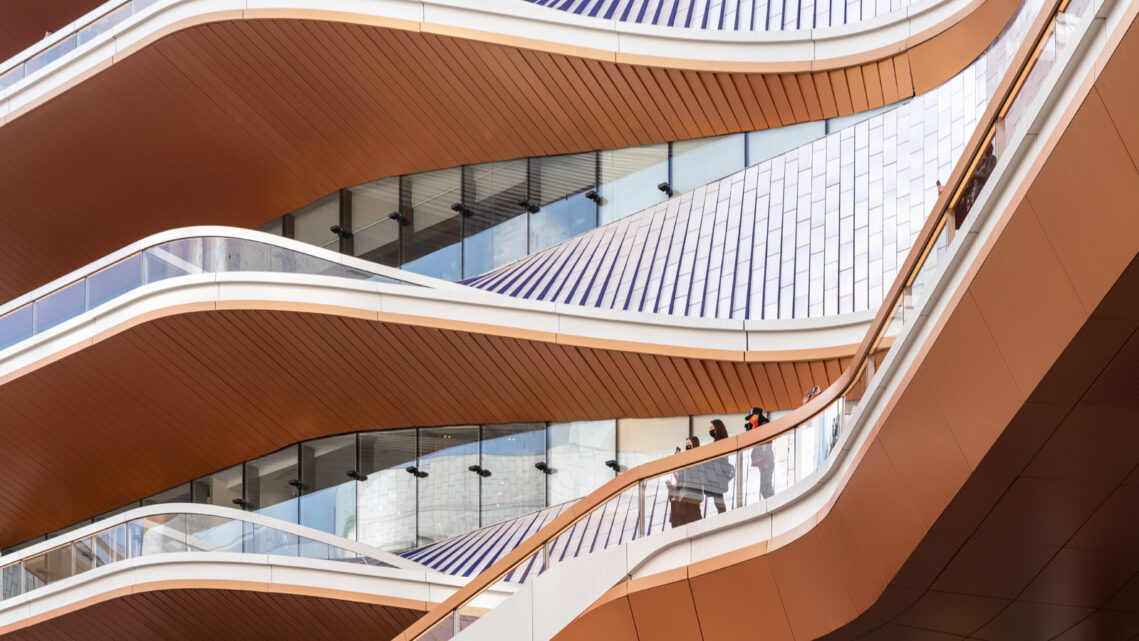 This week’s featured project takes us all the way to Shanghai with architectural photographer Rex Zou. I’ve been following Rex’s work for a while now, and love both his clean style, and his penchant for documenting massive buildings in bustling cityscapes.

This particular project – the Shanghai Jiu Guang Centre by UNStudio and Nihon Sekkei – has been recorded by Rex and his partner Aaron Shao, under their studio Aaron&Rex Architectural Photography. Rex has been kind enough to tell us the in’s and out’s of documenting the Jiu Guang Centre, so let’s get right to it!

“The entire shoot lasted for 5 days; we witnessed the commercial complex from near completion to opening, resulting in the delivery of almost 100 photos and a video. We surveyed scenes with the architects of the design team (UNStudio and Nihon Sekkei) a week before the complex opened, with a large number of workers doing the final cleaning, while the interior shops were in the final sprint of renovation and refurbishment.

We divided the shoot into two parts, one focusing on the empty scenes highlighting the design and the other on the successful commercial body after the opening (incorporating the crowd, atmosphere of the scene, etc.). In order to get a better shot of the empty scenes, we were constantly adjusting the shots to the site conditions, which was very much a matter of timing and analysis of the site’s situation. As you know, it is impossible to find anyone who can tell you the exact schedule during the opening phase of these mega commercial complexes. They are all very busy and they will only tell you the opening date.

On the other hand, when we did the post-opening shoot, countless people and countless billboards were in the shots and there were times when too many people – which was not necessarily a good thing – cluttering the picture or adding to the burden of post-processing.

Rex and Aaron found the sweet spot though, and were able to show off the complex during use, which helps us understand the functionality of the centre, as well as in more reductive quiet moments, which allows us to focus on the architecture and design itself. It is a balance, one that the team did an excellent job finding.

Here is another one of the quieter scenes I mentioned earlier. A close composition on the left creates an abstract quality in the vignette Rex and Aaron made. The centre is distilled down to simple shapes and textures. This is an important image to make in a project of this scale, and it really helps round out the series.

Rex gives us some insight into making his favorite image from the series, telling, “Aaron and I both like this shot of the atrium from the front view, which frames two different architectural offices. Because the atrium is wrapped, there is uneven daylighting. At the same time, night shots can be very [hard here] due to the LED screens and light boxes that change the color of the terracotta panels. So we made several attempts to present as much of the atrium material as possible.”

A bird’s eye view of the atrium denotes the complex shapes and the mammoth scale of this area. This perspective is a great addition to the story of the Shanghai Jiu Guang Centre.

The next block of images are my personal favorites. I love the colors, the perspectives, and most of all, the incredible shapes and lines. I mean, just look at this next shot!

Again, Rex and Aaron shine by chunking down this massive structure into a bite-size portion that we can make sense of. We see the texture and colors of the tiles. The balconies and their stunning shape. A lone figure helps convey a sense of scale, while showing the functionality of the walkways and railing.

I asked Rex what his biggest take away was from recording this project over 5 days. He told me, “We feel it is very important to plan wisely, to keep in constant contact with the site, or to visit the site more than once to judge the timing and cycle of the shoot. Large commercial complexes change quickly – one day you may be doing floor coverings or shop renovations, the next day you may be all done with cleaning.”

There are a lot of places where you can see more of Rex and Aaron’s work. You can visit aaronandrex.com, rexzou.com, and aaronshao.com. If Instagram is your thing, check them out at @rexzou, @aaronshaw, or @aaronandrex.photography