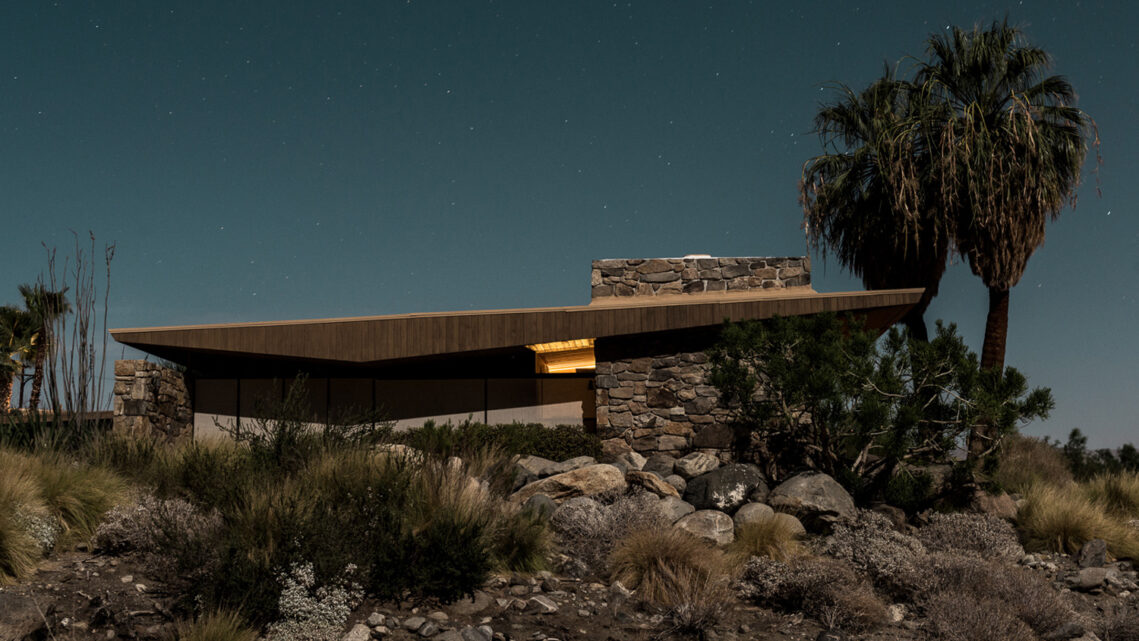 When the sun is in the sky, Tom Blachford’s architectural photography work is filled to the brim with rich color, inky contrast, and emanates an indescribable tactile quality. His commissioned pieces of museums, thoughtfully designed homes, and heck, even a series on Australian cattle, are all examples of technical perfection. They left me hungry for more. That’s when I clicked over to the “fine-art” tab on Tom’s website.

Tom Blachford’s Midnight Modern project stopped me dead in my tracks. It is essentially everything I love in the universe, wrapped up in one otherworldly series. Mid-century architecture & classic cars, all captured by moonlight.

As viewers – and professionals – we are so accustomed to seeing and striving for perfect and clean lighting conditions to showcase a space. For his personal project, Tom did the exact opposite.

Tom Blachford’s Midnight Modern is actually comprised of three separate series of homes photographed in California’s Palm Springs. The majority of the architecture in that neighborhood was designed by mid-century masters like Palmer & Krisel for the Alexander Construction Company, Charles DuBois, and Richard Neutra. These homes are iconic to the mid-century architecture movement. Tom’s shadowy portraits of these houses make us feel a bit like we are on a clandestine trip, peering in on a past world. In fact, they leave me feeling like I’m in a scene from Stranger Things or E.T.

Check out those star trails. The give motion to an otherwise very quiet and still image. They also lend themselves to that slight alien feeling throughout the series. I love the color play between the interior lights and the cool white moonlight spilling out onto the gravel. Tom notes that through the support of various contacts and homeowners in Palm Springs, he was able to have some control over which interior lights were on as well as which cars were used in each scene. There was quite a bit of planning that went into this project, and it shows.

Tom’s Midnight Modern photographs are cinematic in nature. The blue/yellow color scheme and shadows feel filmy without being overdone. In this particular frame of the famous Edris House by E. Stewart Williams, the iconic roofline carries our eyes from side to side throughout the image. The small illuminated window contributes to that secretive feeling that makes us seem like outsiders looking in on this quiet little world.

Using only the light of a full moon, Tom is able to show interesting shadows on the facade of this house. It keeps the image from looking flat and is a really cool yet bizarre thing to see in the dark.

This particular photo is interesting to me. A black house photographed in the dark. It would make sense that the stars here show more motion blur, as I’d imagine his shutter had to be open a bit longer. This produces more light on the desert around the house, giving a nice contrast between the shadows of the trees on the landscape.

There is a powerful rhythm created by the rooflines, repetitive stairs, and that tall rock pile in this photograph. The deep shadows and textures create a very graphic feel at this residence.

I appreciate Tom’s attention to detail here, exposing long enough to catch the slight red cast from the tail light on the curb, and the gentle uplighting in the porch area of the home. There is a nice separation between the blinds and the light we can see between each slat. The grass isn’t completely dark, we are able to see an ever so slight amount of detail and color there. All of these tiny things are what push Tom’s work from “wow that’s neat” to “wow that’s insane.”

Would it even be a series about California without the view of downtown from a pool? Tom’s dark take on this classic West Coast scene is epic. I appreciate the shadowy reflections in the water, going back to that Stranger Things feeling we talked about earlier.

Bring on the cars! A bit brighter and more colorful than the rest of this series, it still feels true to the project and the time period. The perspective he chose shows the dimensionality of the house and plays on the context of the neighborhood.

I love this detail shot that fleshes out the series. That slice of moonlight on the chair produces great color and interest. I love the glossy highlight that runs down the side. It gives a very modern and human feel to the lower part of the image. Beyond the wall, Tom shows off the landscape.

In our last frame for this Project of the Week, the moonlight raking across the exterior shows the subtle texture of the facade. Specular highlights and hard shadows on the car draw our attention to it. The soft and warm light radiating out of the exterior contrasts the deep blue sky. Again, Tom shows attention to detail, letting us see each slat in the window treatments.

What an awesome project. If you’re anything like me and can’t stop drooling over this series, you can pick up Tom Blachford’s book of Midnight Modern on Amazon or a limited edition complete with a signed print of the Edris house on his website. The book itself offers much more insight and some great stores from the project. It’s now the crown jewel of my coffee table!