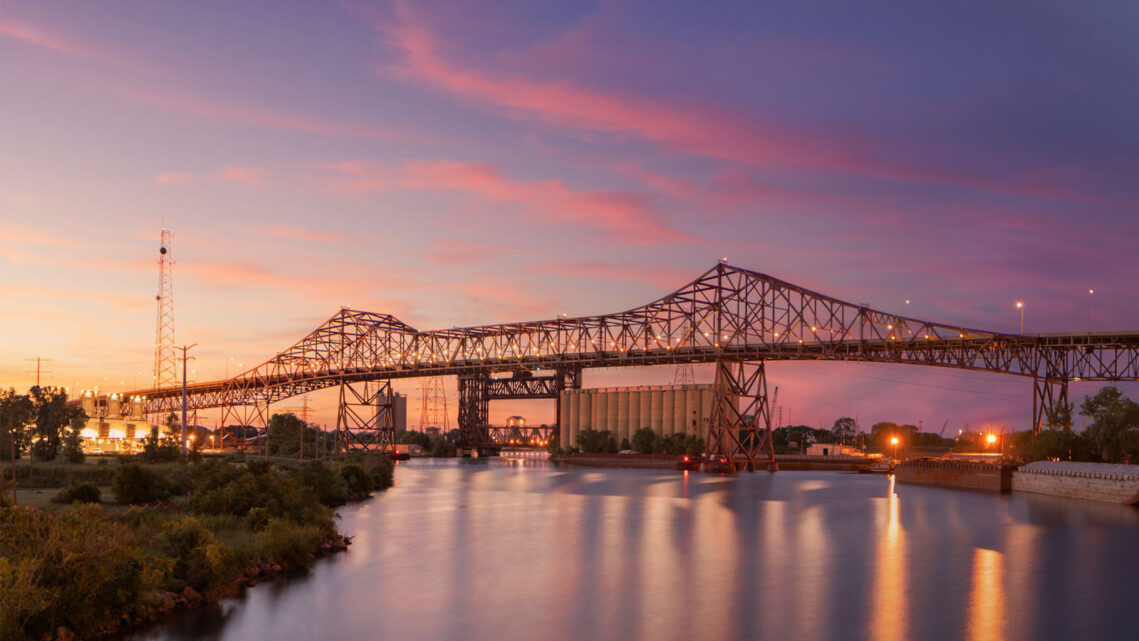 When Chicago based husband and wife duo Ryan and Sarah Miller of Miller + Miller Architectural Photography submitted in their project of the Chicago Skyway Canopy Plaza, I opened it and yelled out “YES!” Behold, the sexiest photographs of a toll plaza you’ve ever seen!

Photographing civil architecture and infrastructure isn’t always glamorous, plus it demands a ton of logistics and risks. Sarah and Ryan have quite the story behind these photographs of this toll plaza and bridge, so buckle up for this Project of the Week adventure, complete excellent behind-the-scenes photos!

The Miller’s casually start off “the client wanted an image with cars in motion, so we happily obliged.” This pretty opening image shows off an idyllic American toll plaza on a cheery day. Cars passing through the plaza gives life and purpose to the scene. The leading lines from the road stripes converging in the center lane is beautiful and symmetrical. But then I slowly realized that the Miller’s had to schlep all of their gear into the middle of a highway to make this happen.

As if this picture didn’t make me sweat enough for Ryan and Sarah, they go on to regale that in a similar shot from a higher perspective they had to hop into a bucket lift truck. “Flying a drone over Interstates with mass amounts of speeding commuters is a no-no.  The bucket lift was fully extended and wobbling back and forth in the winds. Cars were honking, a semi locked its breaks and it’s tires screeched and smoked, plus a random psychopath swore at us. I was trying not to let my imagination get the best of me in the moment. Think of the movie Final Destination. Pucker factor = 10+”

“For this composition, we had to shut down two lanes during rush hour. And let me tell you the motorists were not impressed with that! They lobbed more insults at us than we’ve had in the entire history of our company. They blared horns. They screamed & swore like drunken sailors with middle fingers flying from all directions. They yelled sexist insults. And they even threw stuff at us. It was comparable to Cersei Lannister’s walk of atonement in Game of Thrones. Shame! Shame!”

“We waited a bit for a boat to add a little interest & perspective to this image,” the Millers explain. I love the way the wake draws our eyes toward the bridge. Nice directional light and shadows provide depth and contrast to the scene.

Some of the other bridge shots ended up being a bit more treacherous. “We had to use a bucket truck extended horizontally and vertically over the Calumet River and under high voltage power lines. It was kinda like playing a game of Operation, but with the risk of drowning or electrocution. This is why we love our job!”

Light trails from the passing cars adds more motion and pizzaz to this photo of the toll plaza. The red streaks of the tail lights perfectly compliments the glowing signage above the canopy, and picks up the flecks of pink and red in the sky. “In this image, we blended one of Mike Kelley’s Ultimate Sky Library shots into this composite. Thanks Mike!”

As if standing in the traffic of the plaza wasn’t sketchy enough, the Millers head back out as it falls dark. “The E-ZPass LED signs were really giving us a lot of issues with flicker rate & moire patterns. It took a number of different speeds, apertures & lens lengths to get the right material for the final composite.”

The Millers photographed this project for Skyway Concession Company, LLC. The goal of the shoot was to photograph the Chicago Skyway Canopy & Toll Bridge restoration (performed by none other than Skidmore, Owings & Merrill (SOM). “The marketing department from the Skyway requested day, dusk, and night photographs of the historic restoration of the Chicago Skyway plaza, LED toll lane signage, modern signs along the roadway, stainless steel tollbooth canopy, neon letter signage, and scenic pictures of the high-bridge from the roadway for the organization’s press releases, marketing, website, and advertising photo needs.

“These shots were a major challenge and took forever.  They were taken from a Chicago-style bascule bridge over the Calumet River.  If you’ve ever stood on the middle of a bascule bridge then you know it’s like standing on a diving board with a fat kid dancing at the end of it.  Every time a car or semi would drive down the bridge, it would bounce. Any photographer who uses a tripod knows that even a millimeter of movement will torpedo your image – this bridge was flexing by inches!  So to remedy the situation, I had to wait FOREVER to get a break in traffic for my 25 second exposure.”

I personally love the motion blur and the glow of the lights on the water from the long shutter. It gives these images a painterly quality that compliments the sunset and softens the hard industrial subjects in these photographs.

The escapade continues! “Real talk. So sometimes in architectural photography you may need to bend the laws a little and trespass on private property to get a money shot. But that can come with risks in South Chicago especially during the night. So with the help of Google maps & two way radios, we plotted our night’s mission. But luckily for us at the last second, we were able to successfully schmooze the security guard into letting us have access to the property!”

Ryan and Sarah’s experience at the Chicago Skyway Canopy Plaza is an equal parts hilarious and nail-biting proof that architectural photography can actually be a much more stressful job than folks give it credit for. Whether you are trying not to get smashed by a car in a dark E-Z pass lane, or just doing your best to not destroy a homeowner’s $8,000 marble table as you move it an inch out of frame, there is always something that can go awry! Maybe now would be a good time to shamelessly plug APA’s Business Insurance article 🙂