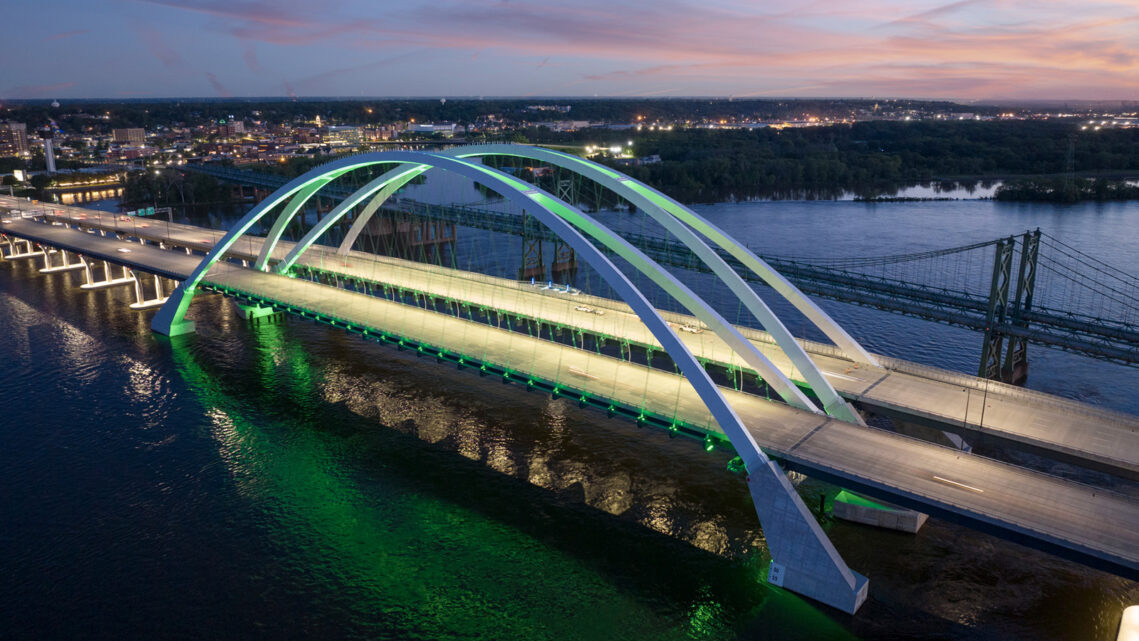 Chicago’s husband and wife team Ryan and Sarah Miller of Miller + Miller Architectural Photography photograph infrastructure in such a compelling way that I could pour through it all day. In particular, Sarah and Ryan knock bridges out of the park.

You might remember their past Project of the Week appearance, photographing the Chicago Skyway Toll Bridge. Today, the duo is back with another glorious bridge photography project – the Interstate 74 Bridge. The I-74 Bridge is officially named the Iowa-Illinois Memorial bridge, but nicknamed The Twin Bridges, and spans the Mississippi River to connect Bettendorf, Iowa to Moline, Illinois. Rosales + Partners selected Miller + Miller to photograph their bridge and highlight its addition to the landscape in the summer season.

“After waiting months, due to the lingering, non-photogenic late Spring Midwest weather, and juggling other clients, we were finally able to narrow down a couple of ideal June days.  So after attending a wake of a family member for a great friend & client, we drove across the state from Chicago to Iowa.  Arriving in town at sunset, we had to head to our hotel to sleep.  But at the last moment, we decided what the heck, let’s go check it out!  Once we got to the bridge, we couldn’t just look at it and say “yeeeep, that’s a nice bridge”, so out came the camera gear & drone and we started at it.  We weren’t at all prepared for the level of insects that accompany the Mississippi.  The bugs were in our hair, eyes, ears, mouth, nose & everywhere else including the front of our lens elements. Even the drone had bug guts all over the propellers and body.  Looking back we should have brought our chickens, they would’ve loved this place,” the Millers regale.

The lighting in the next two images gives a beautiful depth in tonality, long directional shadows, and sublime backlit glow to the bridge. The perfect sunset adds a level of romanticism, making this not-your-average-bridge-shot.

“On night one, we photographed the bridge until dark and we were happy with the results. After only 3 hours of sleep, at 4 am we flew out the doors of the hotel, to prepare for the next morning’s violet hour shots. Before sunrise, we parked at the casino near the bridge and grabbed a coffee meanwhile trying to avoid the drunken gamblers stumbling & mumbling out to their cars. We nonchalantly shot from the rooftop of the casino’s garage avoiding security before focusing on shots by the riverfront,” the Millers told.

They explained that the bridge “replaces the obsolete green steel suspension bridge built in the 1930s and adds much more vehicle plus pedestrian capacity for the modern era.  The new bridge project boasts four lanes in each direction, four large shoulder lanes, a pedestrian/bicycle path, and an incredible glass floor oculus with a viewing platform looking westward to the mighty Mississippi.  The build has an estimated cost of $1.2 billion dollars. The arching white arches are visible from miles away down the shorelines during the day and when illuminated by LED uplighting at night.”

This next shot is one of my favorites. The faint movement and texture in the water, the strong linear shapes, and the neon green uplighting make it feel less like a photograph of a bridge and more like an abstract piece of art with a heavy sci-fi vibe.

What sets Sarah and Ryan’s work apart, and makes their infrastructure images so strong, is the lengths at which they go through to document the project in totality. They make plenty of photographs, at differing times of day, in differing perspectives, with differing contexts. We are seeing the full picture of the Iowa-Illinois Memorial Bridge, allowing us to really get to know the architecture.

Perfectly framed between two cheerful trees, Ryan and Sarah show us the bridge from the shoreline. The two fishing rods make it feel as if someone just left the frame for a second, soon to return. Who said you can’t style images of infrastructure?!

Ryan recalls the few issues he had while flying the drone.  “Not many people know this but the larger Midwest river areas are home to the American Pelican and there were a ton of them.  Typically during drone flights, there is one bird we fear when flying which is the Red Tailed hawk — as they will easily attack drones and take them down, game over.  We’ve had a hawk attack happen a few times actually, not fun.

After this shoot, we can add the American Pelican to the list because we were almost hit by a few that day.  I don’t think they were coming at the drone aggressively like hawks do, but more like a freight train that could care less what was in it’s way.  One of them got so close that the bird’s body filled my entire frame on the controller.  Needless to say, I let out an audible “Oh Shi*t!” As I pictured our $6,000 drone splashing into the Mississippi.

The second flight issue was restricted airspace nearby.  It was pretty simple, no matter what stay well away from the island to the immediate west — it’s the military’s Rock Island Armory where they manufacture weapons.  Flying over it is a definite no-no.  Another issue was the color of the river.  With its muddy bottom and swift current, the Mississippi looked like a flowing brown artery of chocolate milk.  But with the right lighting, angles, and a smidge of Photoshop, we think we were able to grab some aesthetically pleasing material that masked the unappealing water color.”

“Overall, we had a blast shooting this project.  The weather was perfection. Walking across the bridge was a beautiful experience and we felt confident in what we captured.  We left the project feeling inspired at what incredible things humans are capable of building when putting their minds to it,” the Millers said.

A massive thank you to Ryan and Sarah for sharing another beautiful project with us, and as always, getting into the nitty gritty behind-the-scenes story of photographing this engineering feat.

As always, if you have a project you’d like to be considered for Project of the Week, you can submit it here.