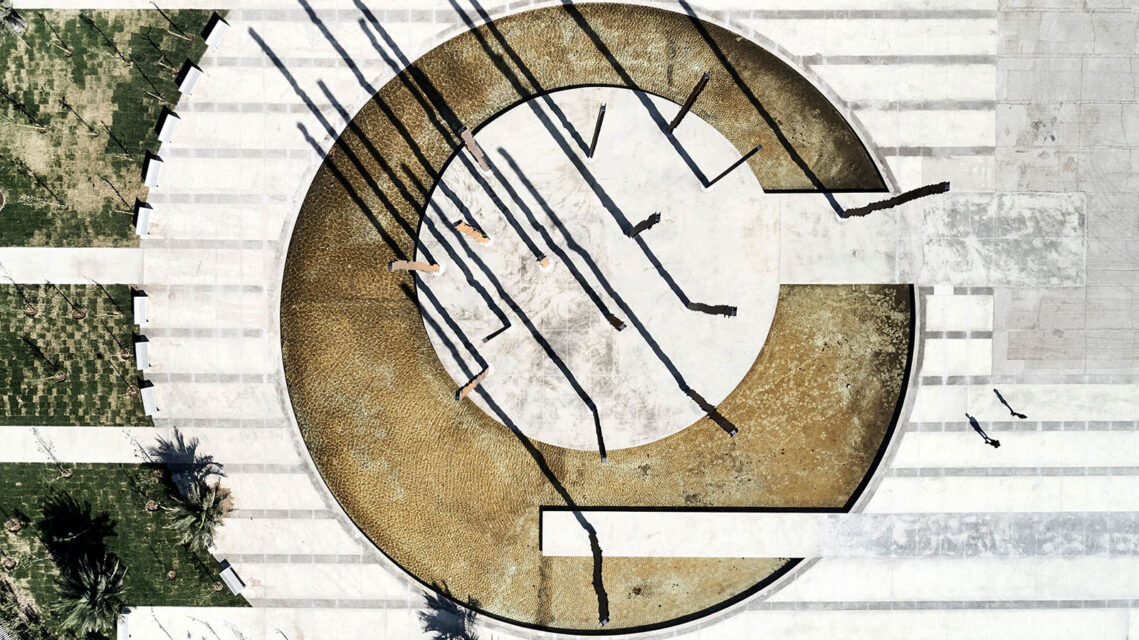 Su Vertical Nos Retiene is a sculptural artwork in Santiago, Chile, designed by Fernando Prats and architecture studios Elton_Léniz and Cruz Mandiola. This urban art is longlisted for architectural lighting design in Dezeen’s 2020 awards thanks to the beautiful work of Limari Lighting Design.

Aside from the wonderful form and general beauty of this work, I love the project because I love the photographs! They were taken by none other than esteemed architectural photographer Cristobal Palma (aka Estudio Palma).

Fernando placed 16 iron columns that mark the outline of the Chilean Andes Mountain on a circular concrete surface, surrounded by a water mirror that establishes a real and symbolic connection between the vertical and the horizontal of the skyline of Andes Mountain.

The secret sauce in the recipe of these beautiful photographs is their intensely graphic, geometric quality. The deep, long shadows, and the importance placed on the shapeliness of the structures — only documentable by aerial image — showcase the brilliance behind this work.

Francisco tells, “One concern [I had with shooting this project] was the lack of people. A project like this usually only comes alive when it interacts with people. I had to bring along a couple of friends to at least give a sense of scale to the place.”

The rust colored pillars reaching up into the blue sky creates a very gorgeous example of contrast through color. There is a lovely juxtaposition between the rough-and-tough materials against the soft, organic, sky.

He goes on to explain the purpose of his shoot: “The project was commissioned by the Ministry of Public Works for the COP25 (Climate Change Conference) as a public urban art “legacy” piece. The conference was planned for December 2019, but in the end, had to be suspended due to the social uprising that broke out last October. It was in that context that Prats and Elton_Léniz commissioned me to register the piece while everyone was waiting to know what was going to happen to the site.”

I’m sure he whet the publics’ appetite for this epic artwork. Cristobal visually transports us to the site by communicating a sense of time and place via light and shadows. There is an air of heat given off by the warm colors and deep contrast. Cristobal places us in the scene by showing us compositions and angles that we would observe if we were actually there. It would be an inevitable desire to stand in the midst of those pillars, and look up through them at the sky.

Here, our attention is captured purely by shape and form. We are able to note the complex edges, and appreciate the massive height of each piece of this sculpture.

Cristobal’s favorite photograph from the shoot shows Su Vertical Nos Retiene at dusk when the lights flick on and give an otherworldly appearance of this sculptural work. I agree that it is a very cool, very abstract scene!

Cristobal’s entire body of work is just off the wall awesome. Check out his Instagram @estudiopalma as well as his website estudiopalma.cl for gorgeous architectural photography goodness.