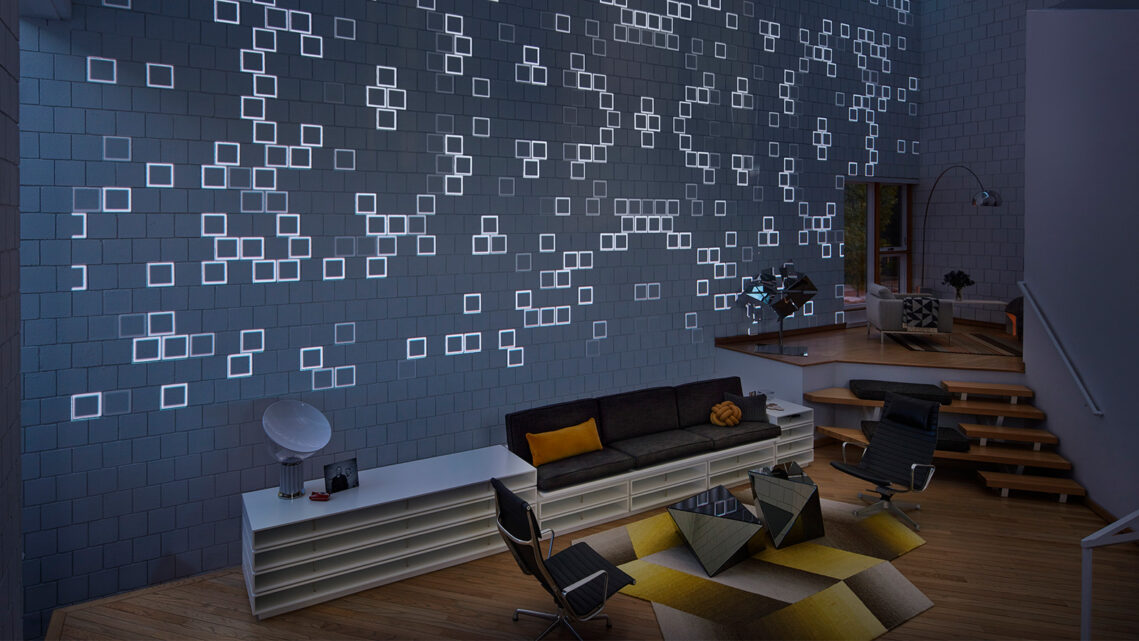 Now that this Project of the Week has made its debut with Dwell, we can introduce this gem to you! Behold, The Netsch Residence, built in 1974 by renowned architect Walter Netsch, and freshly remodeled by Skidmore, Owings & Merrill. This spirited and complex space was photographed by the wonderful architectural photographer, Dave Burk, our featured photographer this week.

Initially, this project caught Mike & I’s eyes on Instagram, and we were enticed by the interesting speckled patterns of light playing throughout the space. This remodeled space has a clean but charming air about it, and Dave has done a stellar job of showing it off to us viewers, so let’s check it out!

First up, Dave sets the scene for us with a simple one-point perspective of the exterior. The time of day he made this shot produces gorgeous sharp, long shadows that give dimension to the facade and highlight its three-dimensional architectural details. With all of the various window shapes present, we know we’re in for an interesting mix of shapes and light when we get inside, and that’s just what we’ll find!

This photograph is what originally drew me into the project. Look at the way the skylights pour a stream of light across the wall. The concrete blocks and the patterns of light create an interesting rhythm, giving visual interest and texture to the seemingly simple space.

Tightening down, Dave focuses us in on the custom sofa SOM created for the new owners. This large bespoke piece meshes perfectly with the rectilinear and open feel of the rest of the home.

A broad view of the home shows the complex roofline and shapeliness of the build. Dave conveys the openness of the space to here, and we are able to see into the different levels and nooks that splay off of the central living and dining platforms. Figures relay the scale of this tall and lovely space, while adding motion and life to the photograph.

As Dave composes to hone in on the dining platform and kitchen area, our attention is drawn to the timber stairs. As the Dwell article notes: “The steps to the kitchen were designed by Netsch to the proportions of the Parthenon, necessitating half steps in between.” Dave’s perspective in this photograph does a perfect job of displaying the funky angles as well as the way the central platforms of the home float over other spaces, but keeps an intimate feel that nestles us into the scene, drawing our attention to each beautiful design feature.

Swapping to a one-point perspective, Dave loses the height and floating feeling of the space, but now we are able to see the integrated lighting and open hall to camera left. This angle does a great job of displaying the contrast between the smooth walls vs the concrete blocks, as well as the gorgeous quality of light that washes over the entire home.

Dave’s photographs of the smaller spaces in this home perfectly display the intricate angularity of the build. On the left, SOM created a built-in office space that is nestled in the angular appendage we saw in the picture of the exterior. The bathroom echoes that geometry. We see repeating building materials, like the warm timbers, as well as the light on the wall that playfully imitates the sun streaming in from the skylights in the living room.

The pièce de résistance of this home though is a clever nod to Walter Netsch and the original artwork that covered this home. The new owners commissioned Luftwerk to create a series of digital art pieces that are projected onto the living room wall and ceiling. This large-format, light-based artwork is a modern and playful way to keep the spirit of Netsch alive in the remodeled home.

A big thanks to Dave Burk and the team at SOM for sharing their project with us. You can follow along with Dave’s great work on his website daveburk.com or his Instagram @daveburk