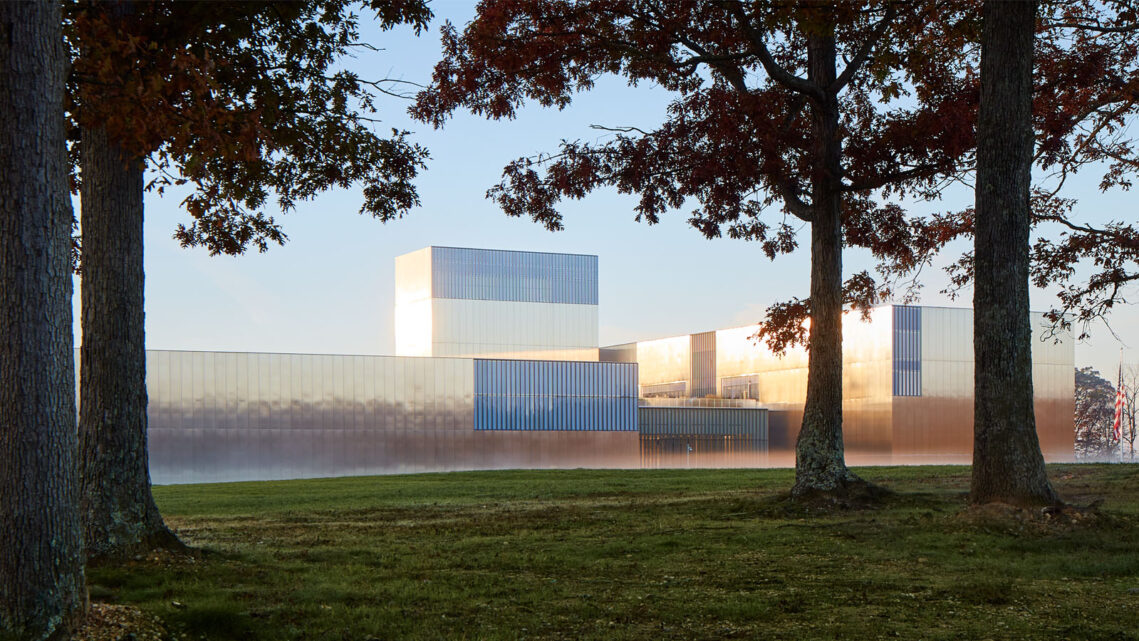 We’re excited to have our friend Dave Burk back on Project of the Week today, this time with another absolute gem crafted by Skidmore, Owings & Merrill! Feast your eyes on Dave’s photographs of the National Museum of the United States Army. With its ever-changing reflective stainless steel facade, Dave harnessed different lighting conditions and compositions that resulted in a powerful, unreplicable, and otherworldly looking series — one that we’ve all been swooning over here at the APA camp.

Dave starts off by telling us “This was an amazing project to work on.  A building fully clad in stainless steel does not come along that often.  The building is built on the top of a hill at Fort Belvoir.  As one approaches from the bottom of the hill, the architecture begins to reveal itself through the trees.  Sited like a citadel atop a hill it communicates a command of the land.  Much as the army endeavors to do in a campaign.  It was this guiding design principle that led me to search out and find [the image below].  Through the trees, the building glows in the morning light and fog.”

“SOM chose reflective stainless steel to clad the building.  Shooting a material with such high reflectivity offered an opportunity to experiment with light and reflection.  Directional light typically guides me through a project. However, the stainless steel facade required a much less formal approach.  Working with reflective steel means that the quality of the material changes constantly.  Depending on your angle of view, time of day or weather conditions, a specific part of the building can present itself differently every time you look at it.  This constant change created an exciting opportunity to create new photos all the time,” Dave explains.

Look at the gorgeous gradient that washes over the stainless steel panels as the sun sets! I just love Dave’s effort to document the museum at varying times of day and weather conditions to highlight the magic of SOM’s facade here.

“The main challenge during the project was that we are in the midst of a pandemic,” says Dave. “The museum opened on Veterans Day in mid November.  The realities of a limited opening and social distancing meant very few people were on site.  Projects like this are best captured full of people activating the space.  I hope to return in the near future to fully capture the human experience both inside and out.”

Despite the pandemic driven sparse attendance, Dave managed to nab a few people walking through the space. Here, the blurred walking figure contributes to the sense of motion produced by the repeating lines that make up this image. She also gives a nice sense of scale and helps even out the visual weight of the scene.

This simple and symmetrical abstract image distills down the textures and design elements that make up the interior of SOM’s beautiful creation.

I appreciate Dave’s control of the color and exposure here. There is a lot going on, but he keeps it tidy, realistic, and translates the complex room easily for us.

Dave continues to speak on his process documenting that gorgeous facade: “After capturing a composition that I liked, I would revisit it during varying times of day under different weather conditions.  The material interacts with its surrounding in constantly changing ways.  Blue sky reflects very differently than sky with scattered clouds or heavy clouds.  Directional sun at sunset was intense where just after sunset or just before sunrise a soft glow would dominate.  Trees and grass are distorted into varying tones and color.  Each condition offers a chance to view the same material in different ways.”

“The architectural design is inspired by three ideals: discipline, modesty and rigor.  Taking these principles as a guide I wanted to communicate a formal and stoic presence of the building.  Much like a soldier standing at attention.  Once the elevational compositions were found, I began to look at oblique angles which allowed the shapes of the building to create more dynamic compositions, unveiling a more complex and layered story.”

A giant thank you to Dave for sharing his insight and images with us. You should drool over more of Dave’s work via his website daveburk.com and his Instagram @daveburk.