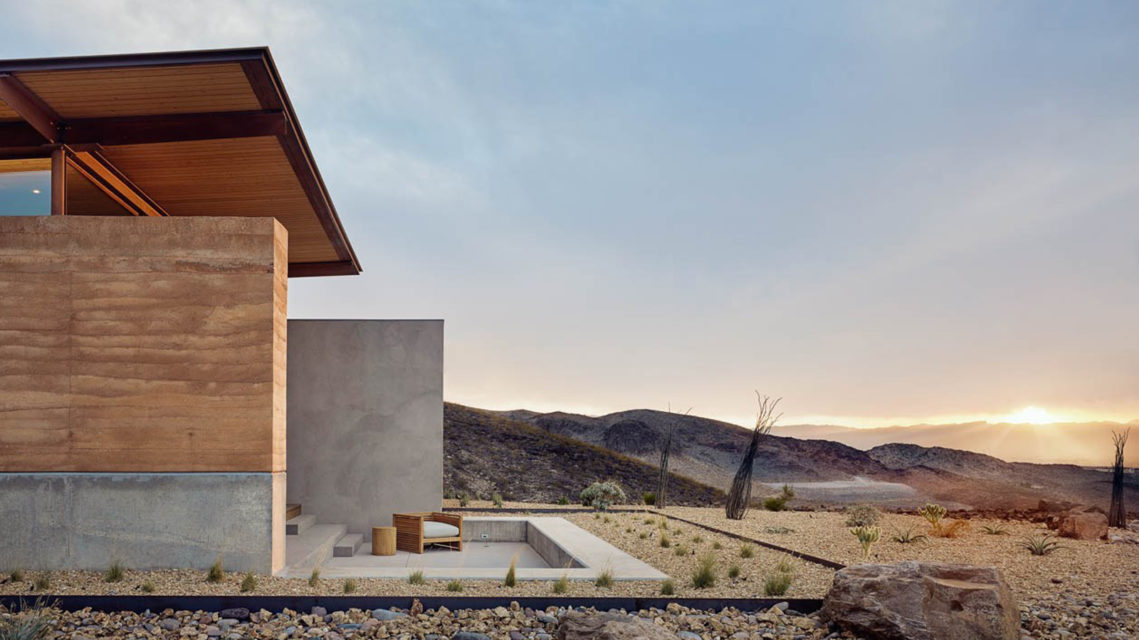 Just nine miles south of the razzle and dazzle of Las Vegas lies Henderson, Nevada. This sweeping desert town houses fossils, state parks, and an architectural gem: Ascaya. Although it broke ground in 2004, Ascaya – a luxurious custom home community – screeched to a halt during the recession. Ten years later in 2014, parcels started being sold off again, and America’s great architects were called in to get building.

When you’ve put the finishing touches on your build – one that’s designed by the who’s who of residential architecture – who do you hire to photograph it? Austin based architectural photographer Casey Dunn of course. And that’s exactly what the architects at Lake | Flato did with their contribution to Ascaya: Horizon House.

Casey sets the scene for us in the opening photograph of Horizon House. We see the handsome facade stretching across the frame, warmly lit by the sun. I love Casey’s sky coloring and the haze of the city in the negative space. A figure is used for scale. The long shadows coming off the cacti indicate that it’s late afternoon. He gives us a great sense of place here that allows us to get familiar with Horizon House.

The dappled light is heavenly, and again, indicates the time of day. Casey’s use of vertical perspective allows us to see the canopy overhead and the texture of the patio below. I love that Casey left just enough of the mountain range for us to see over the wall, reminding us where Horizon House is.

A wider, more encompassing shot gives us more context about the patio area. We are able to see that it leads into a sitting room and that the canopy is part of the roofline itself, but also has its own fun textural element built specifically for the patio. Casey positions himself just off-center to create some asymmetry but also so we can appreciate that beautiful rammed earth garden wall. This also results in plenty of motion and contrast in the frame – organic leading lines on the rammed earth wall are married to visually dense pieces like the cantilevered sunshade, and the delicate, light entrance made by the branches in the top left corner create a nice rhythm of the organic and man-made throughout the photograph.

Detail shots showcase the textures of the facade, and give us a hint of the flora native to the area. The long, sharp shadows provide plenty of depth and mood to these images and help reinforce the language that Lake Flato chose to work with.

Casey Dunn’s work is incredibly cohesive. Each frame matches seamlessly with the rest of the series in both color and lighting.

In the kitchen, Casey’s tight compositions laser in on the fine craftsmanship of the house. These small details are what separate a good home from a great home, and are more often than not, what the builders, designers, and architects agonize over. Using visual anchors like the corner of the island helps us link together the floorplan of the kitchen without having to shoot wide.

In this next scene of the sitting room off of the kitchen, I appreciate Casey’s balance in exposure. The exterior is just slightly brighter than the interior, which is a decision that keeps the photograph looking natural. The use of one-point perspective and leading lines from the couch and the texture on the walls, gently coaxes our eyes back in from the patio and through the room in reverse. This is visual hierarchy at work.

Here is where Casey takes advantage of a wider focal length. Tactfully, he is able to show us how this wing of the house has an open flow. We’re able to see the other module of the Horizon House and a slight glimpse of the pool; his camera height allows us to “walk” through the room and keeps the right couch from crowding our field of view. It also places more emphasis on the paneled ceiling and clerestory windows.

Shew! I love this photograph. There is something about Casey’s color toning that I just can’t get over. A classic blue/orange color palette gives contrast to this scene. The angular light produced by the roofline provides some drama outside, while the large glazing softens that light and spreads it softly throughout the bedroom. It is still directional lighting though, as shown by the gradient of shadow on the side of the bed. This gives a calm and serene feel without looking flat.

Casey’s exterior evening photograph is a true beauty. Look at that sun streaming over the mountains beyond; perfect timing and dare I say a little bit of luck with the sun poking out at the last minute before sunset! That light hits the sitting space from the master bedroom walkout and creates that golden glow on the orange facade. The perspective here is rigid yet nicely complements the stark desert landscape.

This vantage point creates repetition and movement (aka rhythm!) through the roof trusses. Use of a model shows off the usability of the space and reminds us of the double-height ceilings and scale of the home. The cool evening tones in the sky and concrete help emphasize the warm and inviting qualities of Horizon house.

Casey Dunn’s final photograph in this series connects all the pieces of this architectural puzzle. We are able to appreciate a wider view of Horizon House’s massing and how the modules of the home continue to connect. The color and luminosity of the interior lights are just perfect.

I have spent the past few days oogling Casey Dunn’s work. If you’d like to do the same, you can see more on his website, Instagram, as well as in the books Marfa Modern and Texas Made/Texas Modern.