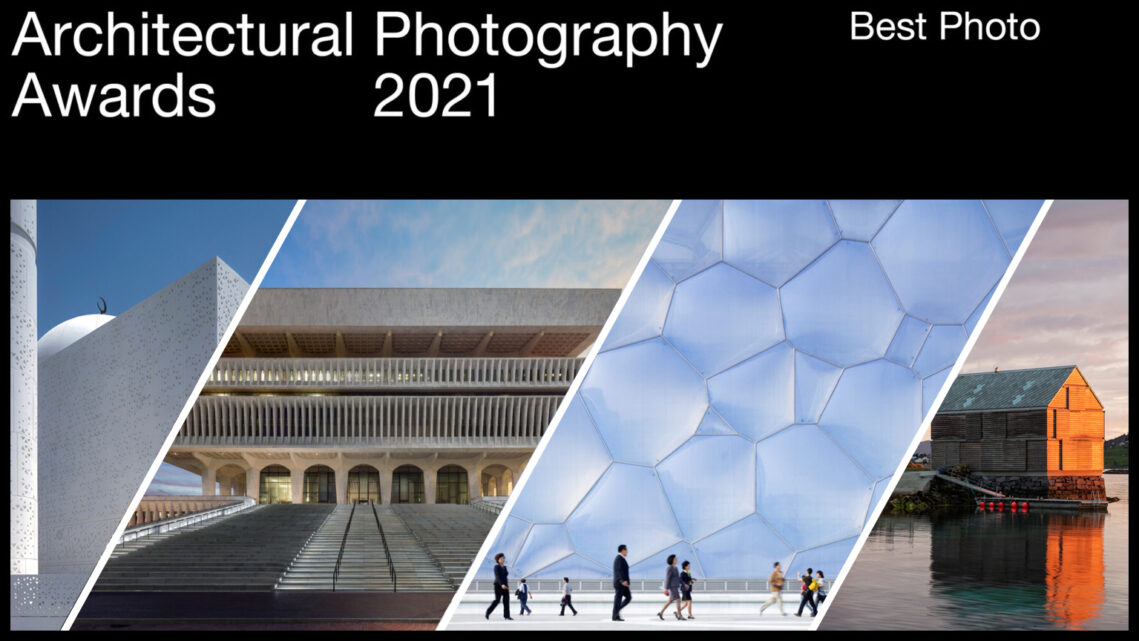 The 2021 Photo of the Year Award was our simplest, but most impactful, submission category. All we required was a singular captivating and memorable image of the built environment. Our judges were looking for photographs that masterfully relayed a sense of place, beauty, and design prowess found in the architectural world. Our contestants were up to the challenge, and we ended up with quite a stunning Photo of the Year Award longlist.

First up on our Photo of the Year finalist is Mark Elst and his photograph of the Weekend House by Knut Hjeltnes Architects.

Judge Eric Reinholdt shares that he liked Mark’s photograph because the “wide framing aptly sets the structure in context.” He also loved the “beautiful color tones and dramatic sky.” Congratulations on being shortlisted Mark!

This residential courtyard photographed by Bas Gijselhart is our next finalist.

Judge Noah Walker shares “Great perspective! The shadow of the figure is terrific, it looks like a cubist sculpture cast in bronze.” Lovely image, Bas!

Next up on our shortlist for Photo of the Year is the VA Hospital Chapel in Detroit as photographed by Roy Engelbrecht.

Judge Aidan Imanova loved Roy’s image, sharing; “Stunning composition – The ceiling of the building is strikingly captured while additionally allowing a sense of context in the foreground. While the image is an architectural photo, first and foremost, it goes further to create a sense of narrative and intrigue by imbuing human subjects at a seemingly pivotal moment. True visual storytelling.” Great job Roy!

Jason O’Rear and his photograph of the Park Union Bridge is our next finalist.

Judge Eric shares what he liked best about this shot, explaining “The clean lines against the irregular, imperfect tracks are especially appealing. The asymmetrical composition complements the design. I appreciate the apt use of the look-down perspective to sensibly describe the function of the structure. This isn’t a ‘drone shot’ for the sake of having a ‘drone shot,’ it more accurately tells the story of the architecture. Oversaturated yellow is an overt reference to transportation color schemes, I love the reference. In a sea of images, this one demands (and deserves) attention.” Stellar work Jason!

Our next honorable mention is Wallace K. Harrison’s The New York State Museum as photographed by Alex Nye. Alex has a unique style and treatment for this photograph, and the judges had a lot to say about it.

Judge Holly LaDue says “This photo stopped me in my tracks! It’s really the combination here of striking Brutalist architecture and the photo itself. This is the best photo I’ve ever seen of this 70s era building in Albany. A man (security guard?) walks in the foreground and it could be sunrise or sunset. The building looks majestic and the photo has breathed new life into this building. I love that you see the details in the pavement in the foreground, the sweeping colorful sky. Often this building is shot from a side angle but this center composition makes it so grand. Rather than Albany, one could swear this is Helsinki or some other European capital.” A well-deserved compliment Alex!

Our next shortlisted entry is the Jameel Art Center as photographed by Shoayb Khattab.

Judge Noah says “This is a wonderful clean composition. It almost looks like an illustration.” Great work Shoayb!

Pol Viladoms‘ captivating photograph of Tres Xemeneies is next on our honorable mention list. Certainly one of the more striking photographs entered into the competition, it instantly evokes a mood.

Judge Noah notes what drew him into this scene; “Brutalism and man. I love the extreme juxtaposition of scale between the building, the man, and the sea.” Congratulations Pol!

When judge Ryan Gobuty saw Darren Bradley‘s photograph of the Villa in Dubai by WaiWai, he simply said “this photo is everything to me, and everything I would hope to capture here.” Well said, and congratulations to you Darren!

Tim gives us some insight into the image by sharing “The photographs from this day in May 2008 sought to capture the Chinese public interacting with the Olympic buildings for the first time. My intent was to find images that conveyed to the viewer, some of the quirkiness and sense of wonder that those attending on the day experienced.

Security was tight on the first day the Beijing Olympic Aquatic Center opened to the public. No big bags, no tripods allowed. Adapting to position the camera at ground level opened up a whole new range of visual opportunities, including compressing the ground plane, resulting in an otherworldly reading of the passers-by that was totally in keeping with the extraordinary architecture of the Olympic Venues.”

What in particular did the judges love about this photo? Judge Eric says “I love that this shot relies on the iconography of the bubble without showing the entire building. I especially love the scale shift afforded by filling the entire field of view with the facade juxtaposed against the comparatively diminutive pedestrians. Smart lens choice compresses the subjects while the highlights on the soap bubbles render the facade with the depth.”

The Photo of the Year Award Winner

The winner of the 2021 Photo of the Year Award title, $1,500 USD, and the first annual APALMANAC Photo of the Year trophy is Gerry O’Leary! Gerry’s photograph is of the Mosque of Light designed by Dabbagh Architects.

Gerry was on assignment to photograph this new contemporary mosque in Dubai, and invited the architect to be a model for her design. She gives a lovely sense of scale and movement to this image. The judges had so many great things to say about this photograph. Eric Reinholdt noted that the image has a “strong composition and use of light to highlight the forms and textured surfaces.” Holly LaDue admired this photograph for its drama. She also shared that in particular, she was [impressed by how] this photo captures the details in the white stone façade of the mosque.”

Congratulations to you Gerry, for making the Photo of the Year!

Wow! What a beautiful list! Hats off to Gerry, Tim, and everyone on our shortlist for Photo of the Year. We’d also like to thank all those who entered our first ever Architectural Photography awards contest – it has been a joy to see all of your work. We’re are enormously eager to see all of your great submissions in our next contest!