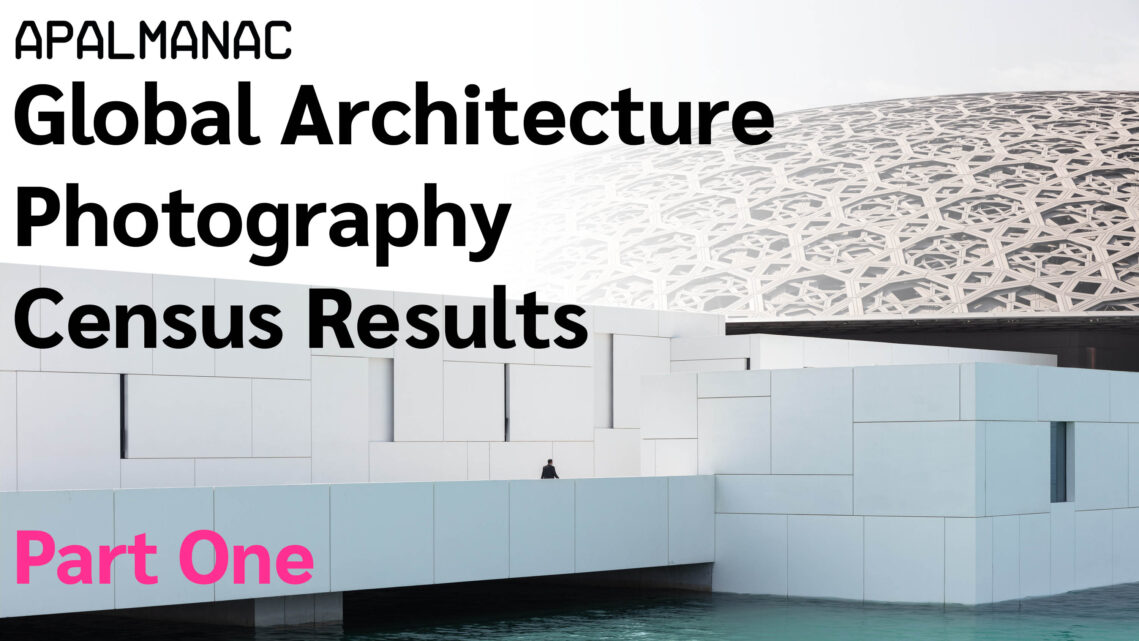 After leaving the APAlmanac Architectural Photography Census open for almost six months in 2020, we are here to report the results. An incredible 1,259 professional architectural photographers from all over the world completed and contributed to the survey, which has provided an amazing cross section of how and why we’re working, where we struggle, where we succeed, and so much more.

One thing that I did not anticipate was the sheer scale and amount of data that the survey would produce: roughly 250 pages of data, charts, and graphs, that needed to be distilled, organized, discussed, and written about. So I have made the decision to break it into chunks, going topic-by-topic, in a series of posts, rather than laying it all out in one gargantuan post. Thank you for your patience as I personally worked through this data over the last months, it was not a simple task!

So in this first post in the series, we’re going to be talking strictly numbers related to fees, billing, and income. There is a huge range of numbers out there and by far the most common topics I get asked about refer to billing, invoices, pricing our work, and so on. Obviously the answers to these questions are is going to vary widely depending on what part of the world, what type of market, and the photographers’ experience, so it is impossible to give a single definitive answer, but hopefully having this knowledge out there will not only give photographers an idea of what they can expect to charge, but also what they can expect to make when throughout their career.

Before we begin, a few notes:

The survey was broken up by region, and generalizations had to be made for simplicity. For example, I consider the architecture photography culture of Mexico to be similar to that of South America, having worked in both areas (anecdotal evidence, yes, I know). Australia and New Zealand were merged into one survey due to being the same country similar working environments, and by far the most egregious and unforgivable decision on my behalf was to consider “Asia” one unit for the sake of the survey. Because working styles, pay, business culture, and so much more varies so widely across the continent, the results aren’t going to be perfect. But in order to try and get a usable sample size, concessions had to be made, unless I was going to make a survey for Japan, China, Singapore, India, and so on. And where does it end? You get my drift.

Since just listing salaries without some background information is useless, let’s try to add a little more detail to round this out.

One of the first questions on the survey was “how many years have you made a living photographing architecture” and regionally, there are some large differences. The most ‘experienced’ regions by a large margin are America, Canada, and Europe, which honestly did not surprise me. The average level of experience of North Americans fell in the 10-15 year range, though this may have been skewed by a few respondents who had photographed architecture for over forty years. I was not even a figment of my parents’ imagination at that point. Incredible! Side note: what a great pool of talent we have reading the site.

The median experience level (perhaps a better measure) in North America was 11 years. A trend that seems to mirror the explosion in popularity of the DSLR camera that occurred in the late 2000s (’07-’10).

The second most experienced region is Europe, which comes as no surprise to me again, with numbers that trend very close to those of America and Canada. The predominant experience range is in the 9-13 years range, mirroring that of North America.

Australia, New Zealand, the Middle East / Africa regions and Asia all fell in the same area on the experience level, with the average amount of experience coming in at around 8-10 years, though the bulk of respondents in all three regions had between 2 and 6 years of experience. It seems that there are a handful of very experienced shooters in these regions who have been at it for 20+ years, with a ton of younger competition who just started in the last five years or so.

Nowhere is this trend more pronounced than in South America and Mexico, where the most common response was only 2 years of experience – the average being six years, with a handful of outliers having between 20 and 30 years of experience. This seems to mirror the spectacular growth in architectural photography in these region, and a massive improvement in the quality of images coming out of South America and Mexico (many of which we have featured here on the site).

How Often Are We On Assignment?

Here’s where things begin to get interesting.

In a similar vein, those working in the Middle East and Africa did not work as frequently, with the bulk, 56%, of respondents reporting only 1-4 assignments per month.

Americans, Canadians, and Europeans all seemed to have a relatively even distribution of assignments per month, averaging 5-10 each. Between the three there was really not any significant difference worth mentioning. A handful in each location are insanely busy, shooting over 20 assignments per month, though perhaps a more fine-tuned survey would wonder if these were full-day architectural gigs or drop-in-and-pop-out real estate shoots.

By far, the biggest workaholics, however, are our friends in the southern hemisphere. A third of respondents in both South America and Australia/New Zealand reported working 20 times a month or more, with the overall average being 15 assignments per month. My head spins at the thought, however, this would align with what I have heard from friends working there – lots of work at a grueling pace if you can keep up.

But how many hours are we actually working?

Here’s where we revert to the global norm (and work-obsessed American tropes) a bit. By far, the biggest workaholics in the world, are those of us in America (and potentially Canada, as well).

Here is the breakdown of how many hours a week North Americans are spending on their business, and the percentage of respondents for each category:

A staggering 50% of us work more than 40 hours a week on our architectural photography practice, which is somewhat not surprising given the work culture here, but looking at the rest of the world really puts things into perspective.

I’ve averaged together the working hours for every other country on earth because it’s so far from what we do in the states. Here it is:

Every other region followed this same even ‘bell curve’ type of distribution for their working hours – so, on average, Americans are working 2-3 hours per day more on their architectural photography business than the global averages.

What kind of money are we making for our hard work?

A fascinating cross section, here. Every income level is represented by photographers from every part of the world, and while there are trends in certain regions, there were outliers everywhere. Europeans were asked to respond in Euros, the rest of the world was asked to convert their finances into USD. Lesson learned: keep it all in one currency for next time, there was already enough data to deal with! I’ve converted to USD below and where appropriate to keep it easier to understand. Some quick takeaways:

While it’s difficult to look at gross numbers per day and draw any meaningful conclusions, it is helpful to be able to understand the going rates for our services around the world. As everyone knows, you can gross a million, and walk away with $10,000 for your effort. These numbers don’t take into account the myriad hard costs and expenses that go into running a photography business, of which there are many (and they are substantial!). Of course, we haven’t even gotten into cost of living calculations. A $500 shoot in one part of the world can be very big money depending on so many factors, and a $2000 shoot in NYC can be nothing if you are trying to rent a place in Manhattan and raise a family at the same time.

Which is why we made sure to ask about…

Net income around the world

We received wildly diverse answers as you may imagine, but some clear trends did emerge about the amount of money a typical architectural photographer will make. There are so many variables to control for – experience with photography, length of time in business, if the answer was provided by an individual or a team-based practice, where specifically in each region they are working, and so on. But – again – there is still a lot of valuable data to be gleaned.

Here are the distributions by region for salaries for architectural photographers around the world. Apologies for the wall of data I’m about to hit you with, but this information is probably best displayed in bar graph form. I struggled to come up with a better way of presenting it in a coherent and understandable format, and also figured if people want the raw numbers from anywhere, this is where they’ll want it from!

The takeaway from this information is that once you have become an established photographer in any region, a decent salary is attainable – from mid five-figures USD all the way into the hundreds of thousands per year. We could delve further into this and look at individual locations’ cost of living and how it compares to salaries, but that would lead us down a rabbit hole the likes of which we would never come out of. A decent backstop of base-line fees and salaries as presented here is enough to set a target for most photographers to understand where they fall in relation to others around the world and in their own backyard. Again – I cannot stress enough how much of a challenge it is to compare data around the world to various cost of living situations in individual countries, cities, and even neighborhoods, so I’m telling you to take this data with a bit of a grain of salt, but also use it (or don’t use it – totally up to you!) to understand the landscape of professional architectural photography a bit better.

See you next time in part two, where we delve into how photographers are running their businesses – studios, retouchers, turnaround times, and much more.