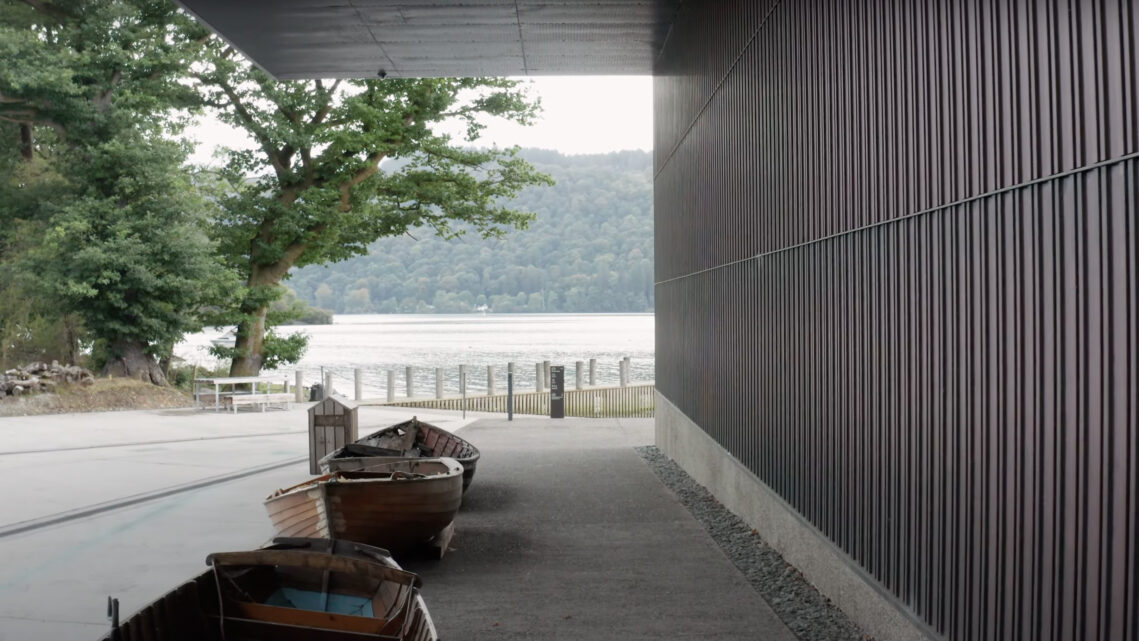 We’re shaking things up with this Project of the Week by geologist turned photographer/filmmaker David Bewick. At the risk of turning this to Architectural Video Almanac, this week we are diving into the creative process behind this captivating piece of film featuring the Stirling Prize-nominated Windermere Jetty Museum.

Dave introduces us to the museum by sharing “Windermere Jetty Museum is located in a slightly magical place. With views of the Lakeland mountains on the horizon, it sits on the shore of the largest lake in the UK. This setting defines the visitor experience, and the collection couldn’t be in a more suitable place. Although it is very close to Bowness, a busy and popular village, the site is incredibly peaceful. Gentle waves, wind in trees, birdsong. The view is changing constantly as the local weather systems sweep up and across the water. The lake is never a single colour and often seems to reflect the subtle blues and grey greens of the underlying slate rocks. The Lake District is a subtly beautiful place, it doesn’t shout at you, it quietly inspires you, and has been the home of many a poet and painter for generations because of that.

I set out to film across two days with quite a simple film in mind going from sunrise to sunset to capture the buildings in all the different light available. The weather had different ideas. The rate at which the weather changes here is incredible and on more than one occasion I had to grab my camera and run for shelter as a cloud seemed to pop above me. I ended up returning across 4 different days to pick up bits that the weather had made impossible, and I still feel as though there is plenty I didn’t manage to get.

My aim was to give a sense of the visitor experience when on site, not so much the museum collection, but rather a holistic sense of what it is like to be there. I noticed almost everyone during their visit seems to find themselves staring softly out over the lake, and for me, this is the real success of this architecture. What at first seem to be rather striking and imposing structural elements, actually begin to encourage you to gaze through the building and out onto the landscape. In doing so they bring the environment directly into your experience of the space. It was this that I wanted to capture in the film.”

Dave’s video does a perfect job at teleporting us there, so without further ado, here is the Windermere Jetty Museum:

David gives us a bit of backstory on himself and his practice. He tells, “I worked for many years as a Geologist, traveling to some seriously remote places and meeting incredible people. I dragged an old Hasselblad 500c and Nikon FM everywhere with me and found myself spending way more time taking pictures of the people and the places than studying the rock deposits. It became pretty clear where my motivation lay and what my values are, so I quit my job and picked up a camera full time.

I went to film school in 2014 and studied documentary film-making, and since then have been working at Boca Films, a small independent production company here in Manchester, UK. I love what we do at Boca, but I have always had a personal interest in exploring the connection between people and the places they inhabit. I compare the bricks and glass of the city around me to the stone Lakeland cottage I grew up in, or the trees and the wooden huts of the communities I worked with in Papua New Guinea.

These buildings and designs define how we see the world and ourselves and so for me, architectural film-making and photography is a lens through which to study people and places without the need for a false narrative or sense of jeopardy. I see a lot of links between ethnographic and architectural image-making; they both seek to capture an ultimately objective truth about how people and environments interact. I find this motivation fascinating and love to explore the subtle ways we all experience the same scene differently, often with no realisation or understanding of why. There is no avoiding a little bit of who I am and how I see the world creeping into the most austere of narratives I create. And there is no avoiding each and every viewer experiencing it a little differently. There is no single truth. And I love that.”

One thing I found so intoxicating about this video is the subtle quietness about it. It’s not just endless dizzying transitions and slides into the next scene. There are actually quite a few frames where Dave is locked off on the tripod. I love that. There is a grounding nature to it that allows us to just “stand there” and observe. I asked David for some insight into his process and how he decides which scenes are static versus which get the slider. He explained “The subtle quietness of the location fed directly into my approach for filming.

I had two contrasting styles in mind. The first, I actually found through Apalmanac – the Penguin Parade by Peter Marko. I love Peter’s style, it’s a very dynamic exploration of the form and structure that is visually captivating. So I knew I wanted a sprinkling of time lapse and parallax, but I ultimately wanted to keep the camera fairly hidden and allow the space to speak for itself as much as possible. To this end, I looked to a filmmaker I have a lot of respect for – Jim Stephenson. His films are subtle, full of intelligent compositions and ask the viewer to slow down and pay attention. I love that. With that in mind, I looked for compositions and scenes that gave me enough movement and shifting light to keep the image moving whilst the camera stayed still. Luckily, between the gentle waves, the weather and the vegetation there was enough opportunity to do this across the site.

I was actually expecting to make this film even slower with barely any movement, but without a narrative interview or voice over, the pace would be just too slow for an internet audience. Perhaps I’ll make a director’s cut that hangs on the still scenes even longer, just to scratch that itch!”

Now let’s talk audio! This film has such a rich soundscape – one that is vital to relay the experience of being on the lake at this museum. David used “a small Zoom H4n field recorder“ to capture as much audio as he could on site. Dave’s goal was to create a soundtrack that didn’t distract from the visuals, but still contributed a nice mood to the story. He mixed his field recordings with the simple and gentle tune Love by Ben Winward which he licensed through Artlist.io. “It’s a single subscription and is updated regularly enough to ensure you aren’t using the same tracks as everyone else out there,” he explains.

In the Cutting Room

“I use Adobe Premiere Pro for the edit and After Effects for some minor manipulations and perspective corrections. I like the Adobe suite as it offers a professional solution to a lot of production problems, and as a multimedia producer that saves a lot of time and money,” says Dave, giving us a look into his editing process for video.

“I also use the Neat Video plugin for noise reduction as I decided to shoot this in ProRes Raw which has pretty noisy shadows, even when exposure is pushed to the max. The bright opaque cloudy skies and dark shadowy recesses of the structures made exposing the footage pretty challenging, so it was a great test of my camera’s dynamic range.

The edit for this took several days, but that’s mainly because I used it as a trial run for my new Raw workflow. I had about 1.5tb of footage as the file sizes are crazy, but I was pleasantly surprised that my 2015 Macbook Pro handled the ProRes codec as well as my iMac Pro so there was no need to create proxies. A lot of time was spent trialing different grading approaches which spanned Premiere Pro, Final Cut Pro X and Davinci Resolve. I ended up with a pretty simple grade, mostly done in Premiere using a few simple masks and heaps of noise reduction.”

My favorite takeaway from Dave was a slice of knowledge that communicates the blessing and curse of architectural filmmaking. He shares “There are positives and negatives to applying moving image to architecture.

Whilst you can make the subtle interactions between spaces, people and their environment explicit in a way still images can’t, you lose much of the technical capacity to compensate for the difference between a camera and the human eye. Perspective, dynamic range, colour temperatures, imperfections all take much more work to correct with moving images. This is another motivation to keep camera movement to a minimum – the footage is somehow closer to the ever-illusive ‘truth’.”

Heaps of Thank You’s to my new friend David Bewick for submitting this project in. This bit of film was refreshing to me, and I hope you all enjoyed it! See more of Dave’s work at davidbewick.com. You can also find him on Instagram @dave_bewick!