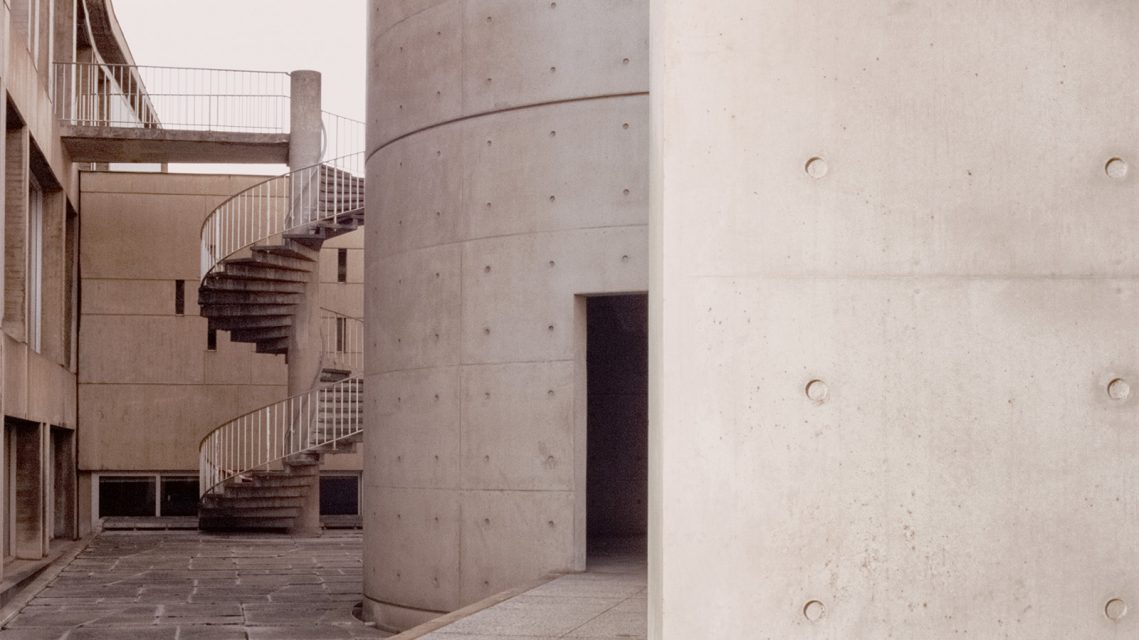 Bouncing between Paris, Milan, and Copenhagen, globally revered photographer Simone Bossi shoots film as an exercise in slowing things down.

As photographers in a digital era, it is easy to overcomplicate things, firing off a myriad of brackets, adding lights, putting up nets and screwing on filters, luminosity masking with plug ins, and on and on. All these “solutions” can overcomplicate the process and dilute the outcome.

Sometimes all that is needed to make truly great images, is to step back, plan around good light, and compose a simple scene. Less is more.

These are the tactics that Simone employed while shooting Meditation Space by Pritzker Prize winning architect Tadao Ando. The result is a series shaped by a quiet intensity that is attempted by many but rarely achieved.

Simone introduces us to Meditation Space by explaining:

“The Meditation Space by Tadao Ando is an intense space of silence, hidden in the courtyard of the Unesco in Paris. Through a slow path from the outside, you perceive a certain source of darkness by looking through, which turns into a bright ethereal one as soon as you are inside. I was intrigued by the relationship between the inside and outside in terms of feelings and I wanted to investigate the rhythm of this transition.

The weight and the scale of its emptiness made me feel calm, protected, isolated — even overwhelmed somehow — but also extremely free at the same time. Lately, I realized this was probably an unconscious condition I was looking for at that time, and consequently, this space represented a strong scenario where I tried to unveil a personal introspective process.”

The concentric squares that this passageway Simone references are beautiful and powerful. They rhythmically pull our eyes through the space with a mesmerizing illusive feeling.

I love the disparity between the shadows and highlights. This graphic natural contrast is accentuated by the fact that Simone is shooting film, so there is no bracketing or shadow recovery. This is a true and accurate representation of the space.

Simone explained that the Mediation Space sits inside a “narrow context of bigger important buildings” and there are various functional connectors present in the space like stairs, ramps, and pathways.

This would typically create a challenging situation to shoot in. Throughout sunny days, the staggering heights and outcroppings on some of the structures cast shadows and reflected light onto the main subject area Simone wanted to shoot. Simone said, “Luckily, it was a perfect overcast late winter day, and the light was so gentle with me that I could take all the time I needed for every single shot.”

Working in tight quarters also presented some difficulty, which Simone said ended up turning into an advantage for him.

“The limitations due to the space forced me to slow down even more, and helped me to carefully feel and consider any single step [I took] towards the building. Some shots were just a little step forward, or a little angle variation from the previous ones, allowing me to naturally flow deeper into this elusive atmosphere. This led me to get closer to the space, in a more intimate relationship with it, and helped me create photographs that try to bring the viewer into the image with me.”

As a child of the digital age who yearns for the slow, tangible, thoughtfulness of working with film, I was curious about what it’s like to shoot architecture in an analog format. No flashes? No brackets? No haphazard trial and error of light placement? I love Simone’s description of the process:

“I was born in a digital era and I started with a standard digital camera. Lately, this has changed deeply and I started to feel more comfortable with slower big heavy film cameras. The use of film was certainly born as a personal need for a more thoughtful approach as I strongly believe that the medium is basically the consequence of an approach and not the other way around.

To me, it’s like walking inside a dimension in which time is dilated and film restrictions positively increase this feeling. You only have a limited number of images you can produce and each one has a cost to think about. I also enjoy its tactility experience: you have the film to carry, to load, and to keep safe too. It’s not as endless as digital; you have to make your own choice and then work on it. There isn’t an overproduction at the end of the day and the value of each shot becomes so precious then.

However, when using film — technically speaking — I certainly take a few risks but I also risk much less to take images without any sense behind them. When you shoot with digital and you have 3 options in front of you, most of the time you just shoot all 3 because you can choose later and this can be misleading. With film, you are forced to choose one and – most importantly – to understand why you are selecting that shot. You need to be very focused and your performance becomes more intense.”

Simone says another positive benefit that comes from shooting film is the “distance” it puts between him and the shoot. Unlike the modern digital practice, where you come home from your shoot, back up your cards and start plugging away at your edits, film makes you wait. Simone enjoys that this time allows him to “restore [his] mind” after the effort of a shoot, and allows him to judge his selects “through a more calibrated and filtered process at a respectful speed.”

This slow and steady pace lends itself well to Bossi’s careful and impactful compositions. I am always impressed at how Simone shows the intricate details of a building, light and pattern play, and the overall mood of the space he is photographing, all in a series of relatively simple frames. The end result, especially in these images of Meditation Space, are photographs that are equal parts architectural and fine art.

Simone notes that the magic behind a great composition is subtraction.

“To me, composition has been always about what not to include in order to enhance the personal and subjective experience of a space. I am not interested in simply describing an architecture project. I like to understand the feelings I can have in a space and work from there.

I am fascinated by all those things that transform a place into a space.

I’ve always found it interesting how simple events can create intense atmospheres, transforming the ordinary in something magic. This is probably an introspective and truly intimate process where I try to find myself in the space and to understand how I perceive its atmosphere.

As a result, I try to frame only the essence of a space through specific open fragments without providing a complete overview of it.

I am fascinated by the fact that what I will hear and try to convey will most likely be read in another way from someone else. I look for meaningful incompleteness, inviting the viewer to subconsciously be in and making his own composition: eventually, if the image is good enough, he will play only with his own subjectivity.”

We are very gracious to our friend Simone Bossi for sharing his photographs of Meditation Space with us, as well as insight into his process. If you are unfamiliar with Simone’s work, I wholeheartedly recommend following along on Instagram @simonebossiphotographer and hopping on to his website simonebossi.it