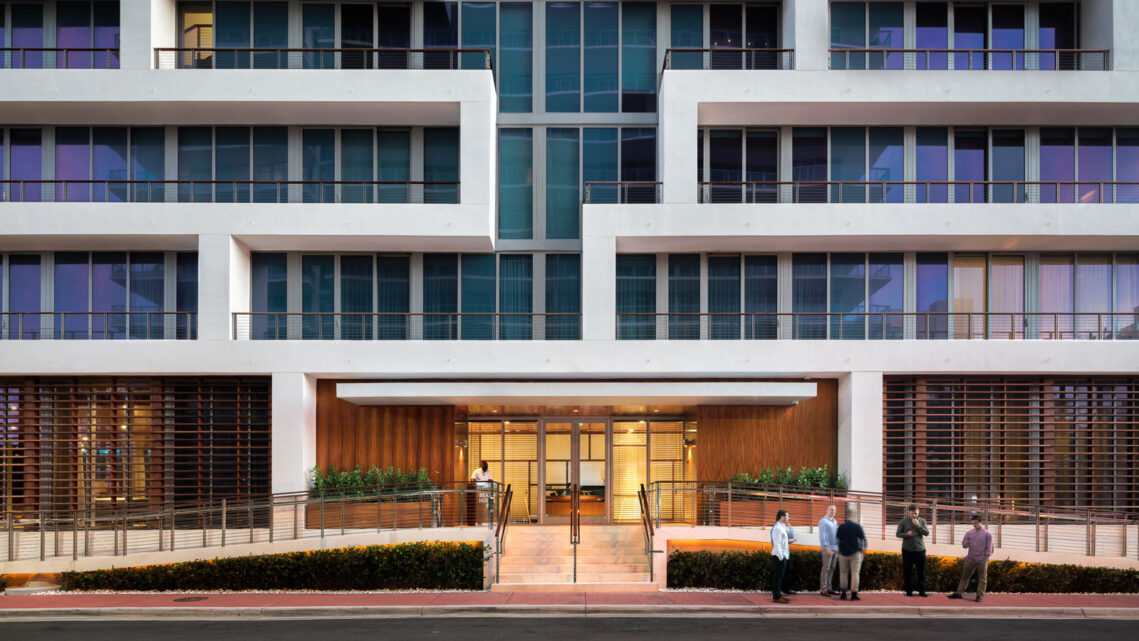 It’s a question I find myself explaining over and over again to aspiring photographers and it’s quite simply one of the most powerful tools available for improving the compositions and quality of your photography. It’s not even limited to architectural photography either, in fact artists and photographers alike benefit from taking advantage of the one point perspective.

I would venture to say that 90% of the images I create are a one point perspective in some form or another, and if you pick up any shelter or architecture mag, you’re likely to find a similar ratio spread across the editorial features and advertisements. Architects constantly make use of the one point perspective in their elevation drawings and being able to nail these as an architectural photographer is a critical skill you should have in the toolbag.

A drawing (or photograph) has one-point perspective when it contains only one vanishing point on the horizon line. This type of perspective is typically used for images of roads, railway tracks, hallways, or buildings viewed so that the front is directly facing the viewer. Any objects that are made up of lines either directly parallel with the viewer’s line of sight or directly perpendicular (the railroad slats) can be represented with one-point perspective. These parallel lines converge at the (single) vanishing point.

What exactly is a vanishing point, anyway?

A vanishing point is a point (there can be more than one) on the image where the two-dimensional parallel lines in three-dimensional space converge to a single point. An easy way to visualize this is by standing in the middle of the street (be safe, please) and watching how the parallel lines slowly converge together in the middle of your field of view (or in our case, the middle of the image). Here’s an example of this happening in a photograph I took while traveling in Stockholm recently:

And here you can see the parallel lines converging a little more easily. The windows, the tiles, the facades, and pretty much every parallel line that we would see if we were there in three dimensions converges towards the center of the frame.

Things can get pretty complicated when discussing the two-point perspective, but for now we’re just going to focus on the one-point. Most of the time when we’re taking photos, we don’t have the luxury of seeing all the way down the center of the street or directly down the middle of a set of train tracks, so we have to improvise. Here are a few examples of the simplest form of one point perspective.

In each case, I’m pretending that the vanishing point is visible through the furthest wall or plane in the image, and recedes into the distance. I use whatever leading lines I can find in to lead the viewer into the image.

You can also use this technique in small rooms and tighter spaces, but you’ll have to visualize the vanishing point as it’s not immediately visible, but yep, it’s still there. Check out the itty bitty leading lines in the ceiling and couch that I’m using to get the same effect. You only need a hint to get the point (ha) across:

Now this is all well and good when it works, and sometimes it works beautifully. But let’s be honest – taking the same photograph in the center of a room with the leading lines all going to the same place over and over and over is going to get boring. And to be honest the symmetry horse is pretty beaten to death (there are times and places for exceptions, and rules are made to be broken, yadda yadda, the above images aren’t too terrible) but it’s great to mix it up from time to time and some of my most powerful compositions have come as a result of getting creative with the one-point perspective.

…This is where the fun begins…

Sorry, I grew up with the prequels and I can’t help myself. So most people at this point know that tilt shifts are handy for preventing vertical lines from converging but I have seen literally hundreds if not thousands of photographers between workshops and websites and facebooks buy tilt shift lenses and literally NEVER do anything else with them except shift up and down. I’ve taught workshops where people have owned a $2500 lens for four years and I show them how to shift diagonally and their mind is absolutely blown. Yep, it’s time to get creative with the tilt shift. Here’s how I use a tilt shift in conjunction with a one point perspective to make a more interesting shot.

Here’s an example from New York City of the beautiful 56 Leonard by Herzog and de Meuron.

Here is a photo from the exact same vantage point without any shift applied. As you can see, the parallel lines converge directly into the center of the image around where you’d expect the horizon to be.

Now, I’m going to shift the lens diagonally up and to the left to create a more pleasing composition – with a little asymmetry – that brings the top of the building into the frame, removes much of the street (because who cares, that’s not the subject) and cleans up the foreground. Note how I still leave some of the crosswalk leading lines in the frame but also utilize the receding parallel lines of the neighboring buildings to create leading lines that pull us towards the subject – 56 Leonard. Note that the camera has not moved at all – but the composition has changed. Our vanishing point has gone from being in the center of the frame to the bottom, slightly off center to the right.

Here are a few other examples – with the vanishing point clearly illustrated – to show how a tilt shift lens allows you to play with mixing up your one-point perspective shots.

How to get these right

It’s very misleading to look at these and think that they’re extremely easy shots to make. That could not really be further from the truth as to become a master here takes a lot of practice. I still think I’m far from it.

The first thing to keep in mind is that you’ve got to slow all the way down. I mean, I can spend 5-10 minutes pacing around on one side of a room just trying to visualize where I’m going to put the camera, and then another 5 minutes or so getting the camera perfectly aligned and level on some of the more complicated one-point images where I don’t have a clean leading line or wall to line up on. These shots are pretty hopeless with a ballhead unless you want to pull them every which way in Photoshop after the fact to square them up, so I absolutely recommend using a geared head like the Arca Swiss C1 Cube or D4 – check out this article for my review of those heads here.

Before I compose any one-point perspective photo, I re-center my shift lens, level the camera using a bubble level (and fine-tuning thru the viewfinder), and try to get things lined up with the horizon dead center. It’s pretty hopeless to try to line these up with the lens pre-shifted, and things will generally tend to feel unbalanced and crooked if you do. If you’re shooting straight into a wall, it helps to get the surface of that wall parallel with the camera’s sensor. I also look for symmetrical visual clues to help tell me if I’m lined up before playing with the shift to move my vanishing point around in the viewfinder.

Once you’ve got your composition set, it might be helpful to double-check with tethering software such as the CamRanger or your laptop. Even after all that, these are damn hard to get absolutely perfect on location, so be sure to finalize the lines in Photoshop using Cmd/Ctrl+T and the skew tool.

Learning how to set up and compose a one-point perspective is one of the most important skills you can have as an architectural photographer – so get in all the practice you can and remember – SLOW DOWN!