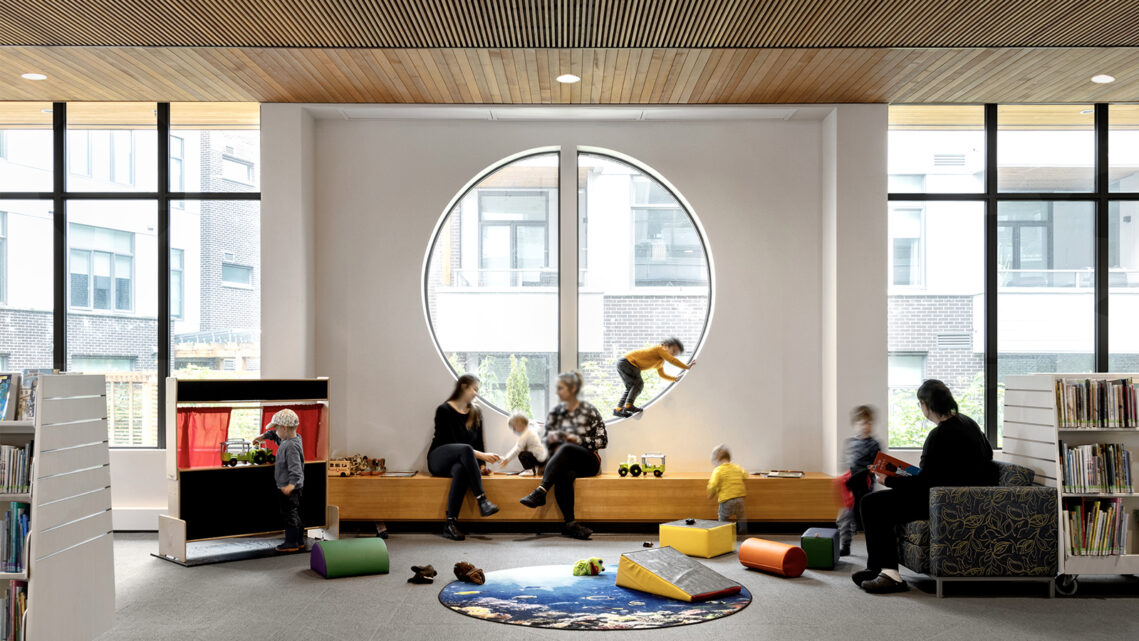 Just as with his past Project of the Week submission, Tony has graciously shared a wealth of information from the shoot and his approach to the project, so you’ll read very little from me here 🙂

Tony kicks off, “This photo shoot was a confluence of several fortunate events that resulted in one of the most gratifying experiences of my photography career. The story began a year prior to being awarded this commission. It was then that I decided to start a personal project photographing commercial exteriors.

I chose to start with a building that I’ve always loved – a curved, glass structure that backed onto the beautiful Upper Harbour and Gorge Waterway, in Victoria. Beyond its aesthetic appeal, I felt a personal connection to this building because, in a previous career, I’d worked in a corporate office across the street. This was fortunate because it gave me opportunities to admire this building; and I spent many lunch hours eating on the boardwalk benches, a few steps away from the building.”

Tony continues, “After my personal project was complete, I discovered that it was designed by D’Ambrosio Architecture + Urbanism (DAU), one of the most highly-respected architecture firms in Canada. Shortly after posting some of the photos from my personal project on Instagram, Franc D’Ambrosio sent me a message saying that he liked the photos and would like to license some of them. I was thrilled! Please understand that Franc is revered in the architecture community, here, in Victoria, and to have him reach out, personally, was a big deal for me.

DAU ended up licensing a few photos from my personal project. A short time later, I had the good fortune of receiving a POTW feature on APAlmanac, at which point, I sent an email to all my clients, including Franc, making them aware of my news. He replied to offer his congratulations and then, a short time later, I received a note from Aragon Developments, one of the largest developers in Canada, asking me to shoot their Esquimalt Town Square project for themselves and the architecture firm, which happened to be DAU!

The final happy circumstance that brought everything together, was the wonderful working relationship that I developed with my contact at Aragon, Janelle Moy. I think that for any architectural photographer, it’s so gratifying when your contact person on a shoot sees you as a strategic partner contributing to their business’s success, rather than merely another vendor offering a service for the project. So, from beginning to end, this Town Square project was a wonderful experience!”

Tony gives us insight into his favorite photograph from the shoot. He tells, “I really like the soft, warm light across the entire scene and, yes, I flat-out got lucky by having those wispy clouds angled in such a way that pulls the viewer into the Square. I’m also pleased at how the shadow coming off the municipal town hall (seen on the right edge of the shot) fell onto the bottom right corner of the library’s façade, adding such subtle depth to the image, as did the colours of the sunrise reflected in the library’s main-level windows/glass wall.

The icing on the cake was to have a municipal worker cut across the scene, walking his dog, while wearing his work overalls! It felt like I was capturing this gentleman’s pre-work ritual, and, for me, it added a nice touch of authenticity to the scene.”

Divulging more about his process, Tony shares “Like so many do in our community, my preparation begins by using a sun-tracking app to plot where the sun will be at different times of day. The other thing that I try to do for every architectural shoot is to personally visit the site and spend a good amount of time there, so that I can physically see how the light interacts with different elements around, and in, the project. In this case, I had to do this twice because I had very thick fog for my first site visit! I think this helped me out a great deal because I saw potential compositions in my second visit that I missed during the first.

I sent the scouting shots to my main contact, Janelle, and her feedback helped to craft an initial shot-list. Using an overhead site map that Janelle provided, I made notes on which photos were to be captured at certain times of day, with notations made on those images that I thought would end up as “hero shots” – both ground-based and aerial.

Another key part of the process regarding this shoot was having Franc D’Ambrosio spend 30-minutes with me, walking around the Town Square. It was a pleasure chatting and getting to know more about him. I was pleased to learn that Franc was a photographer prior to getting into architecture and, in fact, he brought his camera to our meeting. We literally walked around the block, exchanging ideas about what we saw and how it could be captured. He highlighted several key design elements that were important to him and, of course, as he was describing them, I was snapping photos of those features with my cell phone.”

“Beyond these tactical discussions, though, the most memorable moments in our time together revolved around the pearls of wisdom that he offered throughout our walk,” Tony continues. “For instance, Franc told me not to shy away from capturing open spaces within my images because, from a design perspective, those ‘gaps are intentional’. He noted the importance of showcasing the materials used within the project but that I also needed to consider ‘geometric detail’, too. Probably the advice that most resonated with me, though, was to “show the project’s relationship to streets”. That is, showing roads / streets in the photos allows for a visible connection to the neighbourhood and, thus, imbues the image with a sense of being part of the host community.

Between the information I gleaned from site visits, the input from Janelle and the advice received from Franc, a shot-list and game plan for the shoot were born!”

“My approach to the onsite portion of this shoot was like my approach to most shoots – i.e., create a game plan, follow it as much as possible, and remain open to the possibilities that present themselves for additional images not on the shot-list,” Tony explains.

As we step inside the library, Tony greets us with a top-notch one-point perspective that harnesses the bold leading lines in the frame to communicate the scale and depth of the space. Our eye is pulled through the library, noting the details along the way.

I also appreciate the quiet nature of the photographs Tony has made. Tony includes enough figures to give life and purpose to the space while still allowing the scenes to feel peaceful and not overly complicated.

Tony tells, “The most challenging part of the shoot revolved around limitations placed on how long we were permitted to photograph the library’s interior spaces. It was a pretty hectic pace and while we didn’t capture all the shots in our allotted time, the library’s management team graciously allowed us to return for a brief period, a few days later, to complete our work. Other than that, this photoshoot essentially stayed on course.”

We’ll wrap up this week’s featured project with one of my favorite images. I love seeing the functionality of the space and the kid climbing in the window. It gives this scene a playful feeling and we see the brilliant design of the space being used to the full. Thanks so much for sharing this with us Tony!

Head over to tcphotography.ca to see more of Tony’s work, or stop by his Instagram account @tcphotography99.