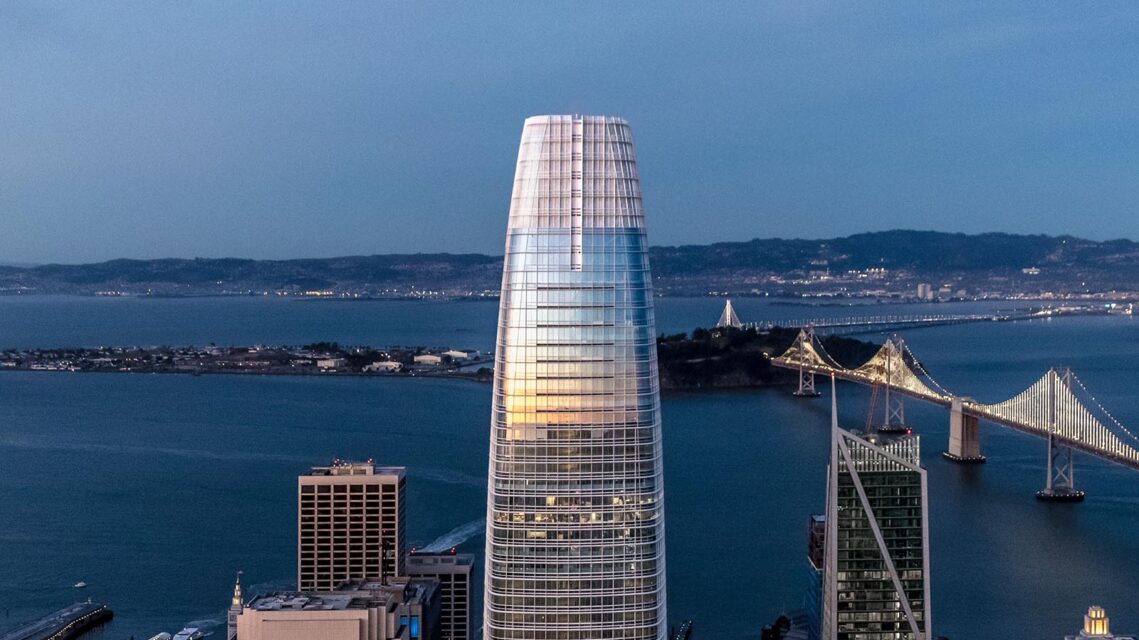 Pelli Clarke Pelli Architects has always been esteemed for their mammoth landmarks. All around the globe, their colossal beauties stretch into the sky. One of their particular designs that I love — The Salesforce Tower —stands 1,070 feet tall in downtown San Francisco. Who better to capture this sleek and sexy skyscraper than an architectural photographer who also calls San Francisco home, Jason O’Rear.

Jason shot this project for Pelli Clarke Pelli with the goal of documenting San Fran’s new skyline. What initially drew me to the photographs of this project, besides how rockin’ gorgeous they are, is seeing the tower in all different kinds of lighting conditions, at all different times of day. I was curious to know how long it took to achieve those kinds of results, and when I asked Jason, he said “Honestly, I spent about two weeks studying the project and surrounding context. I know that sounds like a lot of time, especially since I live in SF, but it was a lot of fun discovering new views.”

This establishing shot on the left will give you some idea of how big this beast is, which is reinforced in the picture on the right, where Salesforce Tower has its head in the clouds. Jason explains “[In the image on the left] I was given 1 minute on the rooftop at the worst time of day for lighting. Worth it! It’s the only view where the entire tower is visible and not interrupted by the transit center.” The photograph on the right was captured while he was shooting a totally separate project.

So what kind of challenges come with photographing a very, very big building like this, in the heart of a busy city? Jason tells us “Each day presented its own challenges in a way. I had to rebook the helicopter no less than five times, due to weather. Another challenge was walking around downtown alone in the dark with all my gear. Not super fun. Rooftop access was another challenge. Some of the best photos I took were views from rooftops. [It took] lots of persistence, luck, and kindness.”

It’s great to see the ground level and entryway of the tower. Breaking the building down into chunks helps tell its complete story, as opposed to just focusing on its height and shape. There are a lot of great things happening in Jason’s image here. The main thing that catches my attention is the overarching mood of this scene. The play between the cool blue tones and the subtle glow coming from the lobby is beautiful. We are given the notion that Salesforce Tower is a warm inviting beacon as it starts to fall dark, or the weather gets rough. Speaking of that, I love that Jason caught the guy walking by with an umbrella. That gives us a good sense of scale and atmosphere, hinting at the rainy weather he mentioned earlier. I’m a big fan of the subtle light trails on the street. They are just enough to give some motion to the image, and echo the horizontal lines in the structure, without being too distracting or oppressive.

This perspective is wonderful and compelling because it leaves some aspects of the building to the imagination. It’s implied that the portion of the tower we don’t see stretches up past its neighbor, while below, street signs and stop lights, and other city infrastructure doesn’t obstruct our view of the tower and the space surrounding it.

Jason relays “To get this shot, I was standing on the sketchiest roof ledge i’ve ever been on.” Shew!

Hanging out of the side of the helicopter, Jason shows us a little-seen view looking down onto the Salesforce Tower and the Bay Bridge. I love the context this gives us, and am blown away by all of the beautiful nuances of these images he was able to capture, all while leaning out of a chopper.

This dazzler is another great photo for seeing Salesforce Tower in context. I love how glitzy everything looks lit up, and then the glow of the houses in the hills beyond the bay. Jason explains where he was at for composing this image: “This shot was photographed from the very top of 140 New Montgomery – a historic building – in between two gargoyles.”

This next photograph is one of my favorites of the bunch. I love the way the tower is visually isolated and prominent in the scene, while still showing important little details like its size in relation to its neighbors, the Bay Bridge and the tower’s priceless water view, and the scenery in the distance. Not to mention, how epic is that reflection, turning the tower into a canvas for those painterly colors of the sky.

The richness of the colors, the light, the deep shadows, the crisp quality of the foreground — It all tallies up to make one phenomenal image with plenty of mood.

I mean jeez, could this be any prettier? Look at the way the colors in the sky and mountains reflect in the windows of the tower. The golden sky and purple clouds create a perfect harmonious balance. Thanks, color theory!

We’ll end this Project of the Week with this gem from Jason. It shows the Salesforce Tower in the ultimate context. San Francisco’s iconic golden light washes over the city. We see the Golden Gate Bridge in the background, as well as the mountains and foggy marine layer rolling over the bay. What a perfect scene.

A big ole thanks to Jason O’Rear for sharing the story of this shoot with us. Check out more of Jason’s beautiful work on his Instagram @jasonorear or his website jasonorear.com.