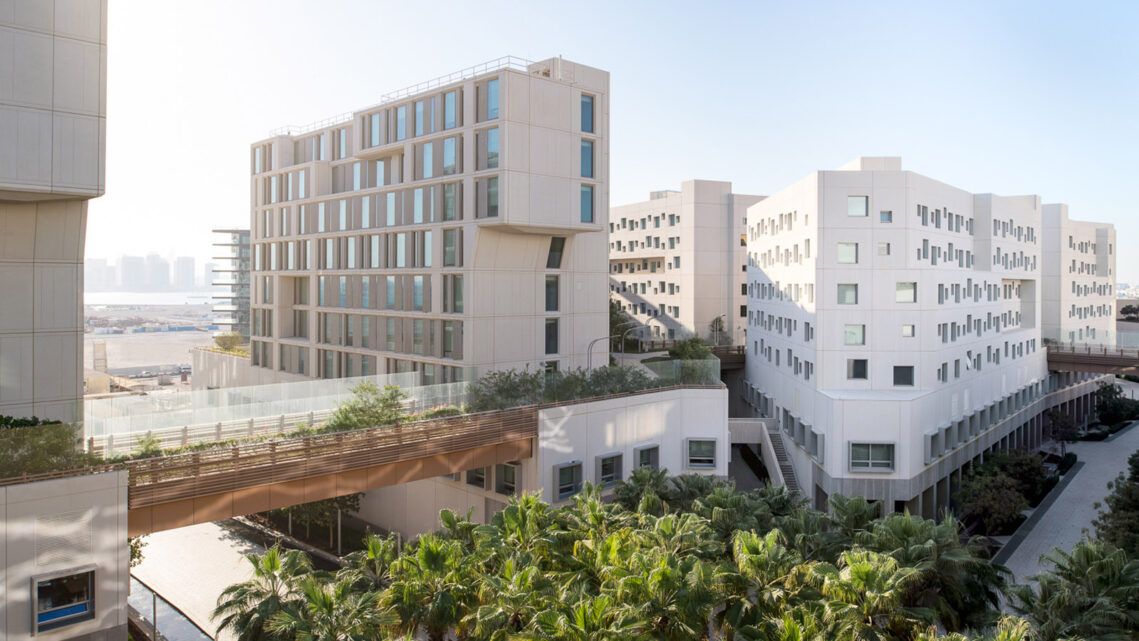 This week’s featured project hails all the way from Abu Dhabi by Dubai based architectural photographer Catalin Marin. Catalin shares his work of the Abu Dhabi New York University campus and was kind enough to tell us a bit about the unique architecture as well as his approach to photographing the University.

Catalin introduces us to this project by sharing:
“NYU’s campus in Abu Dhabi was designed by famed Uruguayan architect Rafael Vinoly and although I did the shoot for NYU — who was updating their image library — rather than the architect, I really wanted to do my best to convey the way the space was designed to provide plenty of shade and wind circulation during the scorching Abu Dhabi summers. With that in mind, I tried to find compositions that would show the narrow corridors between buildings and how each block fits almost like a puzzle piece. I also thought it was important to demonstrate the different levels within the campus so I looked for vantage points where you could see the “high line” that runs through the entire campus and how the bridges offer great sweeping views of the entire grounds.”

“My favourite image out of the series — which is definitely the hero photo from the entire project — is this wide shot from above. I love the way the sun bounces between the buildings and the way the bridges are clearly visible, making the connections between the different blocks. I also love how lush and inviting the sunlit palmtrees look like, creating enough shadow for even the hottest days.”

Throughout this series, I myself fell in love with the geometric shapes, repetitive lines, and hard shadows that Catalin documented. They all contribute to the graphic and modern mood of the campus. By harnessing these shapes and shadows, he gives us a great sense of place, dropping us in to the shady desert oasis of the University.

The leading lines in the next photo are so powerful. Our eyes are pulled in to the building by the pathway and its hard edges. Again, Catalin transports us right into the scene with his use of directional, well timed light, and also his camera height. It feels like we are truly on campus, walking down the pathway to class.

Catalin’s perspective on this detail shot is perfectly suited to show off the depth and shapeliness of the building and it’s windows. We are able to understand the staggered facade and mix of rooflines. This is all information that would be lost to us from a flat one-point perspective.

My favorite thing about Catalin’s photos of NYU Abu Dhabi is the quality and directionality of the light in his compositions. It makes each scene feel dynamic and three dimensional. Catalin explained his process of choosing his light and compositions by telling us, “When I was researching the project, reading about how the campus was designed to create as much shade as possible to protect the people from the harsh Middle Eastern sun, I thought it would be really interesting to shoot a lot of the images backlit – with the sun either in the frame or very present at the edge of the frame.

“I think that does a good job at showing the architecture and at the same time highlighting the shaded areas. I think having the sun so strong in the frames also opens up the spaces making the campus feel airy and tying the exteriors with the large interior spaces I photographed like the atrium or their incredible sports center which tend to be full of natural light.”

Speaking of the atrium and interiors, let’s check those out next! The backlit vibe and the myriad of lines and shapes do tie in well with the exterior images we saw before. The project feels very contiguous across the whole campus.

As always, I was interested to know what challenges this project threw Catalin’s way. He noted, “Most of the walkways on the first level are lined with tall window panels which meant I had to either squeeze my lens in between glass panels in the corners (corners where the only spots where there was a wide enough gap), climb on quite tall ladders which the safety people didn’t really appreciate or balance my tripod in some very sketchy ways over the glass and some very thin wooden panels.”

Catalin’s next composition showcases the curvature of the indoor track. By including a runner, it gives purpose and scale to this scene, as well as a bit of motion to spice things up!

We’ll close this week’s project out with a photo of the massive naturally lit gymnasium. The symmetry of the space is perfectly complimented by Catalin’s one point perspective. We are able to see just how huge the gym is, as well as the functionality of the space like the articulating basketball hoops and collapsible bleachers.

Catalin brought us some beautiful and practical photographs of this university! A big thank you to him for sharing this project with us and taking the time to give us all the nitty-gritty details from the shoot. You can check out more of Catalin’s work on his site, momentaryawe.com, or on Instagram @momentaryawe.