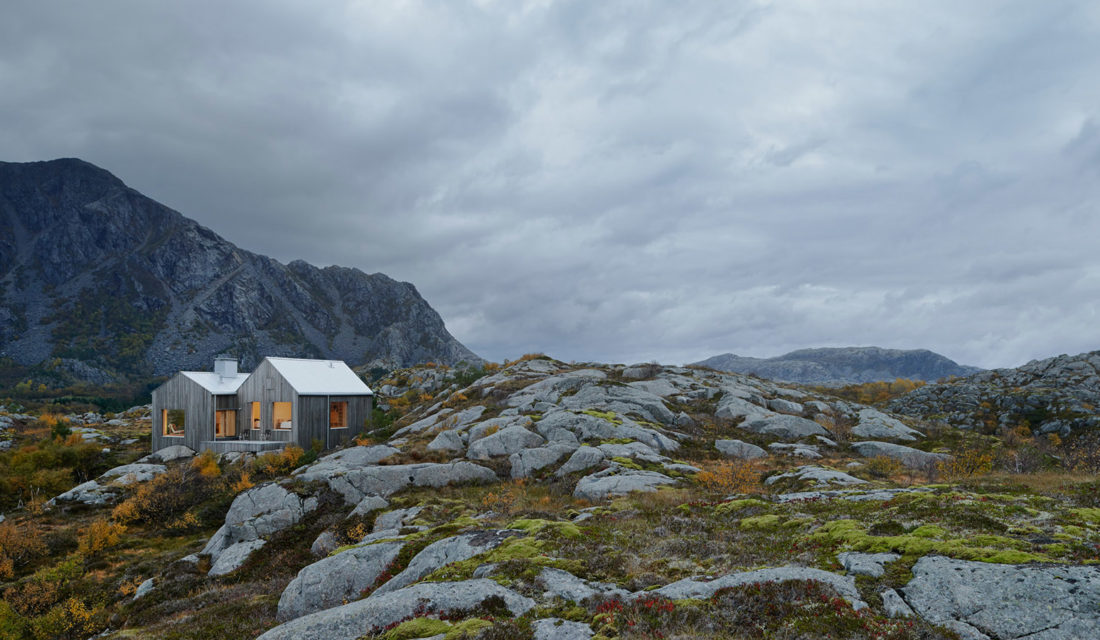 On this episode of Project of the Week, we’re teleporting you to the Norwegian wilderness. Keeping in line with last week’s moody & broody theme, Swedish architectural photographer Åke Lindman has documented Kolman Boye’s Vega Cottage, complete with foggy exteriors and soft-lit interiors. The atmosphere of this set renders it worthy of Project of the Week, so let’s dive on in:

Åke sets the scene for us here with a wide and expansive view of the Vega Cottage in its natural habitat. The angle he chose is perfect and really tells the story of this home. The structure itself appears small and a tad solemn feeling, giving lots of breathing room to the landscape around it. What a view, eh?

On the reverse side of the house, Åke frames the building between a tide pool in the foreground and the foggy mountains behind. This is complimented by an additional view of the coast that runs along the property. It would be easy for a gray structure to get lost among the gray fog, gray sky, and gray rocks, but Lindman keeps focus on the home itself by placing that bright roof within the bounds of the dark mountain background.

His perspective throughout this entire shoot really takes it to the next level. Look how he intentionally places his camera askew to show both the doorway and the windows over the deck. If Åke shifted himself slightly to the right, the frame would have been perfectly squared up, but we would have lost sight of the windows here. Judging by the view, the windows are an integral facet of this building. In the photograph on the right, I love the angle of the lines which mirror and play off of each other. The pitch of the stair railing and the roof allows our eyes to slide off to the right, where we’re given another peek at the epic scenery.

Continuing our tour of the grounds, Åke shows off a few accessory structures that lend color and vibrancy to this series. He processes them without going overboard and distracting from the fairly neutral and cool color palate. Åke isn’t afraid to get close to the structures themselves, using them to frame bits of the landscape. He also doesn’t shy away from including that raggy outbuilding that others may have omitted. This gives character to the series, provides some texture, and really envelops us in this very Scandinavian scene.

Inside the Vega Cottage, we are shown opposing views of the same room. This is great because it sets the scene for us inside the cottage, giving us a sense of familiarity of the floor-plan and how the rooms connect.

Again, stellar perspective choice. On the left, our eyes are driven through the image, scanning through three rooms with ease. Each feature of this frame – the fireplace, table, lighting fixture, kitchen appliances, all the way to the back window – is given ample surrounding space to keep it from looking crowded. The image on the right is a great detail shot and keeps this project feeling cozy and restful.

The soft light throughout Lindman’s Vega Cottage series gives off such a peaceful feel. There are no harsh shadows or hotspots. This set is easy to look at, and easy to feel the mood of the location.

I know hygge is a Danish term, but man I’m feeling it here in Norway. With the darkened tone and the competing – yet gentle – color temperatures, this photo makes me want to grab a seat and watch the sunset through those massive windows.

As the sun continues to set, Åke heads back outside for some twilight sets. The warm orange light contrasts the blue/grey surroundings nicely. It also pulls out the orange coloring from the foliage. What I admire most is that he didn’t go too heavy handed on the brightness or situation of the interior lights. This keeps in line with the soft but moody feel of the entire shoot.

Wew! Look at that fog rolling in from the mountains. Again, I’m a big fan of the subtle light coming through the windows and how your eye is led there by the warm bushes in the foreground. It makes the cottage look inviting.

We’ll end this like we began: Åke showing the Vega Cottage as a warm reclusive haven in the middle of a cold and rocky landscape. He knocked it out of the park on this project, giving us viewers a strong sense of place through mood that transports us there!

Many thanks to you Åke for sharing your series with APA and making such great images.