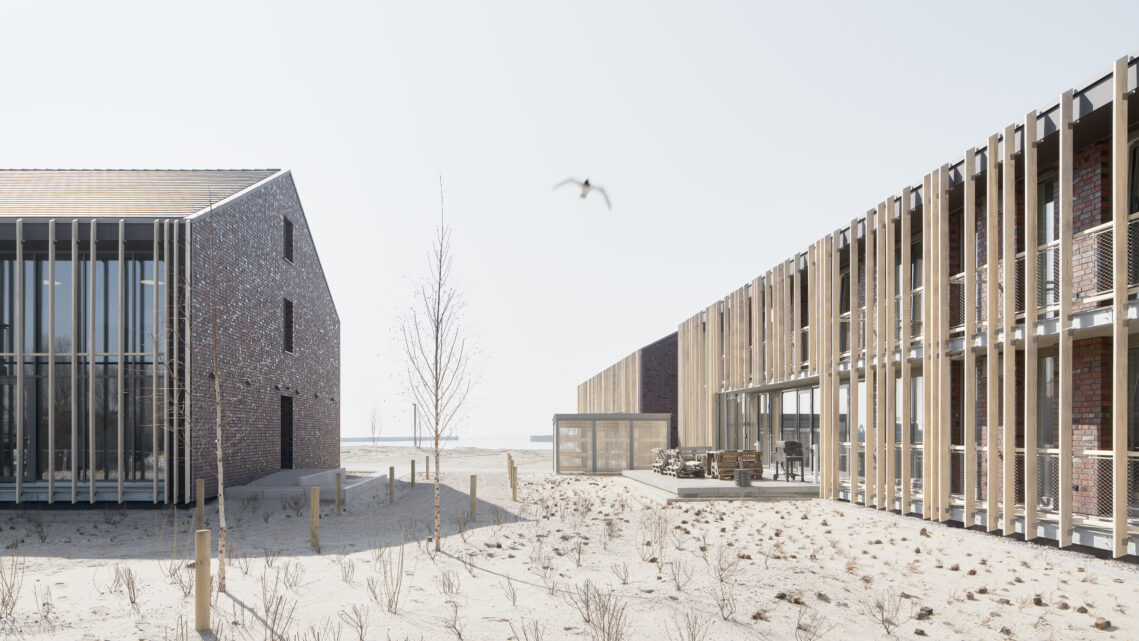 There are a thousand ways to describe this Project of the Week, but simply sublime is all that really needs to be said.

Really, simply sublime was the goal mood for this project, which is meant to be a relaxing home-away-from-home. Delugan Meissl Associated Architects designed this superb residential housing for offshore workers who are building and servicing the major offshore wind turbine parks in the North Sea, between the UK, the Netherlands, and Germany.

The delicate color palette, the congruency across many different times of day, the exquisite light…there is a peaceful feeling that emanates from these perfectly created images. This is the craftsmanship of photographer Piet Niemann based out of Northern Germany.

Piet kicks things off by sharing “It is a housing complex on the island of Borkum for the fitters of one of the largest offshore wind turbine parks in the North Sea. The facility is located directly at the harbour – in a way, the workers here fall out of bed in the morning directly onto their ship, which then takes them to the offshore park. And in the evening they land again and are directly at their housing complex, having dinner, a chat and then go to bed. This is only the first construction phase. The second phase of construction is currently under construction and will include more residential buildings, local suppliers, offices, etc.

The island of Borkum is a very popular vacation destination. Our production fell at the end of March and usually, the island is packed with tourists. However, March 2020 was the first hard lockdown in Germany and thus the island was eerily empty. Only people who could show a contract of work were allowed to set foot on the island and so the basic feeling was very unusual. We had the island almost for us alone. And since all the workers got on the boats early in the morning, we were mostly alone on the project during the day – with the exception of one last workman.”

He continues “I always strive to show the projects in context with their users or to depict the interactions of passers-by with the architecture. Of course, this was not so easy under these (empty) circumstances and required a lot of patience – we had to ‘arrest’ everyone we came across for the pictures. Craftsmen, seagulls, passers-by, harbour employees and – when they were not on the water – the actual users. Well, and crew of course.

Another difficulty was to photograph the project in its urban context because since it is currently still the first phase of construction, we had to be very careful not to integrate the extensive construction sites too heavily on the images. The building typology is very similar to the existing buildings. Building structure, roof shape, etc. It has to be said that this harbour area was used for military purposes for a long time and the existing buildings, well, don’t exactly stand up to any aesthetic scrutiny. However, the tender stipulated that the new building had to fit into the built environment and I was and am really thrilled with the way Delugan Meissl Associated Architects have implemented this, also in collaboration with the landscape architects, Horeis + Blatt. They have managed to create a very high-quality living environment here, where the offshore workers – who certainly do one of the hardest jobs you can do in the civilian sector – can once again relax a little in their very short leisure time.”

Maybe it’s because I was raised in a small shore town, but the feelings this image evokes and the tone it contributes to this project, make it one of my favorites of all of the architectural images I’ve seen. I love the long crisp shadow that is cast by the building on the left. The pale coloration of the sand works beautifully with the faint blue of the sky. Piet’s perspective allows us to see the sheer length of the building on the right. We understand the different structures and their relation to one another without him giving too much away, or losing the feeling of intimacy that he has conjured up. On the horizon, we can note the walls of the harbor. And obviously, the bird just takes this shot to a whole new level!

So how long was Piet there and what was the planning process like? He tells, “I had planned four days on the island to have some backup for the weather – and it was needed! The weather on the Frisian Islands – a long chain of islands along the Dutch and German coast – is only partly predictable and many can change spontaneously. We booked the ferry and the only remaining hotel on very short notice when the weather forecast was ideal.

On-site, the conditions were then initially semi-ideal and we had to plan well so that we could photograph all essential perspectives in the needed light. My biggest concern, however, was the wind, which by its nature is a constant companion on an island in the stormy North Sea. In this respect, however, we were extraordinarily lucky. the first two days were practically windless. Only from the third day, it freshened up considerably and the fourth was then as we had feared – very windy. Even a 1/250 second shutter speed came hand in hand with motion blur and a long exposure was just impossible. Not to mention the constant sand trickle of the surrounding dunes, which is gnawing on the equipment and your own eyes during a long day quite a lot. But thankfully, we’re able to wrap up the shoot without any major unfinished business. Otherwise, I’d decided to stay longer. “

“We had already organized all possible accesses, releases, etc. in advance. Thus we could act very freely on-site and move stuff the way we wanted to,” Piet explains “For example, emptying parking spaces, and removing or have removed all the other things that I found disturbing. Which are – considering it’s still a construction site – quite a lot.”

Being such a sprawling project with lots of factors – be that weather or construction – I am so impressed by the magnitude of photographs that Piet was able to make. There is such variety in this project, yet they flow together seamlessly.

He shares “You have to have a vision of what you want to convey visually. Perceive the place and discover its qualities and put them in the foreground, underlining them as well as possible. Work hard to make sure that no circumstances on location thwart your plans.”

As the golden sunset washes over the side of one of the residences, it pulls out warmth and texture that contrasts nicely from the colder and more rigid linear bits of the facade. We see the workers returning to their homes, which lends a nice bit of context and story to this scene.

That theme continues, this time in a tighter composition that makes it feel as if we were walking up to join in cooking dinner.

While I am not the kind of person who is overly concerned with gear, I was curious to know what Piet felt he should pack in for a project like this. I learned that Piet makes his images on a Cambo Actus with a Sony as a back and the Canon TSE lenses. He says “The, unfortunately non-existent 35mm TSE is replaced by a Contax 645 35mm. Redundancy is very important to me and so there is a second body in the cases, which is also often set up in parallel to be able to photograph two perspectives at the same time and in the same light.”

He goes on “to the chagrin of my assistants – I never travel without my big ladder. It is not always mandatory to use but is often the necessary key to the only really good perspective.”

I was interested to know if Piet brings along any unconventional tools or objects to make life easier on the job. He shared that he brings “‘a wrench for removing construction fences and the key for unlocking dumpsters. On the whole, though, I think I’m cooking with the same hot water as everyone else.”

A proper send-off for this lovely project is the following triptych that Piet made. He shows us the way the building changes throughout the day in varying light. We also get a glimpse of the functionality of the residence. The first frame shows a worker leaving at sunrise. He is perfectly illuminated by the bank of warm glowing windows, leaving the pool of soft light. The next frame shows the same worker returning as the sun sets, heading into shelter. The last frame, and perhaps my favorite, notes the functionality of the ledge designed into the steps. We see it used as a place to sit and relax, or maybe rest while grabbing a bite to eat.

I inquired about what advice Piet would lend to a photographer shooting a similar project. He happily shared, “Come with passion! Come prepared, come well-rested, and bring both sunscreen and warm clothes. Bring patience and time with you and be commissioned with a proper budget. Think carefully about the subjects you want to photograph – and then photograph them with maximum dedication and take any necessary effort. And do not dare to come without an assistant.”

Eternal Thank You’s to my new friend Piet for submitting this series for Project of the Week, and sharing all of his wisdom. You can (and should) see more of Piet’s gorgeous work at pietniemann.de and via Instagram @_piet_niemann.