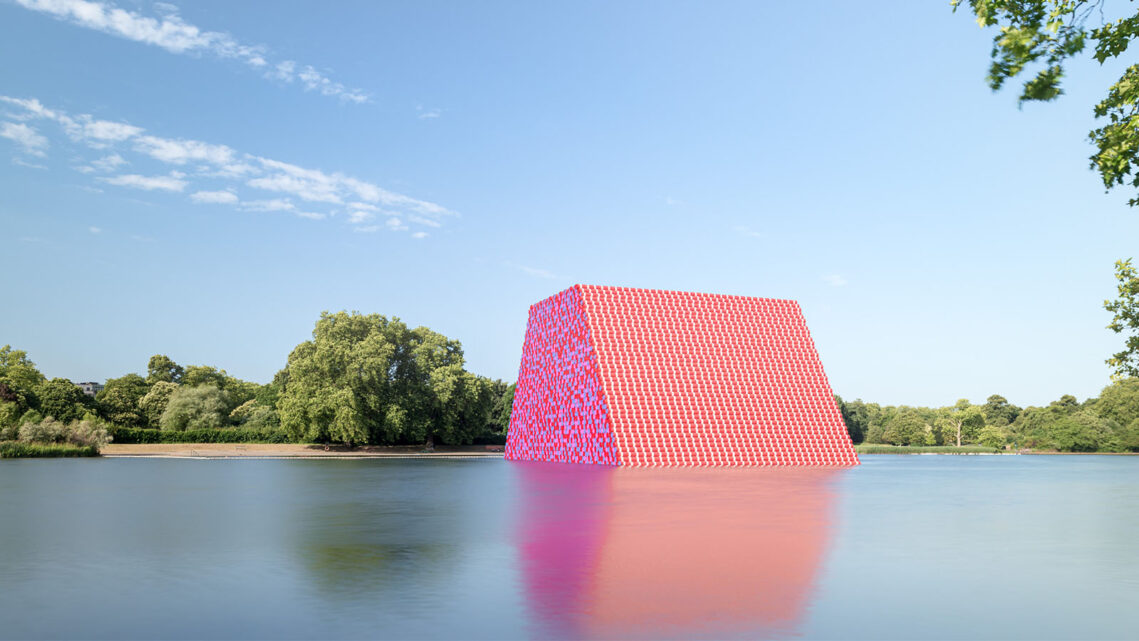 This week’s featured project comes to us from the Serpentine Lake in Hyde Park, London. In the summer of 2018, The London Mastaba — created by famed Christo and Jeanne-Claude — made its debut to parkgoers as part of the Serpentine Galleries, then disappeared 3 months later. Architectural photographer and Mass Collective cofounder Francesco Russo who splits his time between London and Venice made some beautiful photographs of this installation and sent them our way after the unfortunate passing of Christo early this summer. What a year 2020 is shaping up to be!

Anyhow, Francesco is here to recount the ins and outs of photographing this project including getting up early to beat the crowds and cloning out an absurd amount of goose poop. Let’s jump on in with his commentary!

“The Mastaba was under construction at the same time as the Serpentine Pavilion 2018 by Frida Escobedo where I was working on-site documenting the construction phase over the month of May, so I had the chance to be around there quite a lot. I went to photograph the Mastaba a few days after its opening in July. It was one early morning at about 4:30 a.m. – yes, we get very early morning lights in summer in London – because Hyde Park is usually very crowded and I wanted the images to focus on the impact of the structure on the urban landscape of London. I usually like to show the relationship between architecture and people, but in this case, since Christo’s work is all about twisting the perception of the spaces that we’re used to seeing in their usual shape, I preferred to approach the project this way.”

“I also wanted to capture the early morning light to be able to use long exposures and have the effect of the smooth water surface. The Lake has not exactly the clearest water and wanted to improve the aesthetic of the images through this easy old trick. I actually thought it would have been easy, but it was not at all. I didn’t consider the fact that the Mastaba is a floating structure and it hence moves with water. This twists many of the habits of architectural photographers that really on having a still subject to photograph. Therefore the main challenge has then been finding the right combination of settings and the use of ND filters to have both the silky water effect and freeze the movement of the floating structure at the same time.”

I really appreciate the way Francesco approached his compositions while photographing this piece. The way the installation towers out of the water, and Francesco shows off its massing and shapeliness is beautiful. By shooting both wide and encompassing photographs, and then tighter details, we are able to get the full scope of this artwork, its surroundings, and the individual components that make it up.

Francesco continues to recount “Despite this (the challenges of capturing the reflection in the water), it’s been a very enjoyable and relaxing morning. The second challenge came in post: the Serpentine Lake is crowded with geese, ducks, swans, pigeons, and all sort of birds. Even if the installation was launched just a few days before, its surfaces, the sloping ones, in particular, were already literally covered in bird guano and that’s something I didn’t realise until I got back on the computer. The cleaning process required quite a lot of effort. I imagine there was someone in charge of cleaning the structure regularly over the months, but this time it was on me and the photoshop clone stamp tool.”

Ahh. Not a duck dropping in sight! I love the repetition and movement created by the barrels and the way the stripes carry our eyes down the frame. Francesco’s color grading is beautiful and subdued, not allowing the reds or bright magenta barrel bottoms to be over-saturated.

Despite initially saying he was going to forgo showing the relationship between architecture and people, Francesco still sneaks in a frame with a human element. The swimmer gives life, motion, and scale to this massive whimsical art piece.

Many thanks for sharing your photos of The London Mastaba with us Francesco! If you’d like to take a peek at more of Francesco Russo’s lovely body of work, you can head on over to his website francescorussophoto.com or on Instagram @francescorussophoto.