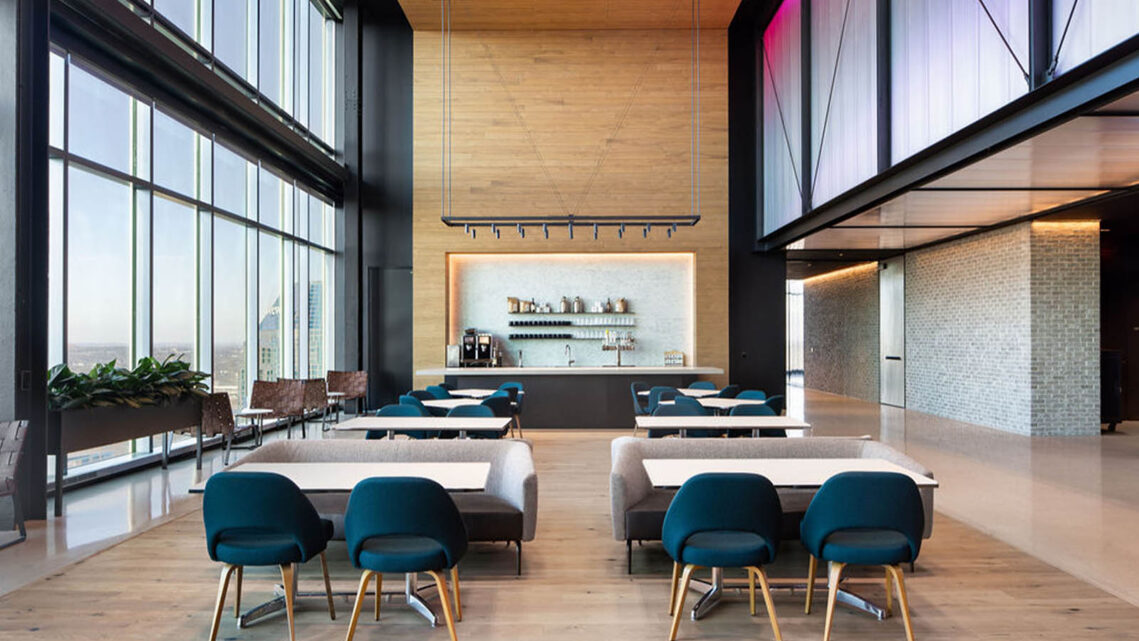 If you’re looking to be inspired by an example of corporate architecture that displays a perfect use of figures, wonderful light, and encapsulates the feeling of what it is like to be present in the office, look no further than today’s Project of the Week. Jordan Powers is an architectural photographer based out of Nashville, who was kind enough to share his photographs of the Alliance Bernstein headquarters, as well as heaps of insight into his process of photographing it. I’ll let Jordan take it away:

“My client for this shoot was global financial firm, Alliance Bernstein. They recently moved their headquarters to Nashville from NYC and the employees just started moving in toward the end of 2021, so they wanted to document the new offices for internal communication, marketing, and recruitment before it was completely full,” Jordan tells.

He continues, “As we were doing our scout and walkthrough a week or so before the shoot, it was obvious that it was going to be challenging for a few reasons. The first being the lighting. The things that were really important to my client were to highlight the windows, the views, and to incorporate the diversity of their employees.

Given the directionality of the sun and my scheduling and people limitations, I knew that I would only have a couple of hours to try and capture everything they wanted. This shoot was going to need to be spread out over several days for just a few hours each day. I knew this project was going to require a lot of time and energy and parking fees, so I over-estimated the time I was going to need to spend doing this project, requested as much unfettered access as possible, and charged accordingly.”

“While I did have access whenever I needed (mostly), scheduling was a bit of a conundrum. I was fortunately given some flexibility on the majority of the shoot days for the office areas, but there were common areas that were very restrictive on when I could shoot and they did not allow me to select the time frames so that I could time it with the sun. Also, being that this building just recently opened, people were very excited to show it off to new employees, friends, family, etc.”

The next two images are some of my favorites from this series. Jordan does a beautiful job at displaying the scale of the area, while allowing our attention to rest on the details. There is a pleasant mix of directional window light sweeping through the scene, while still allowing us to note the lighting design throughout the space.

“Several meetings were happening in the important areas I needed to shoot as well. Some of them were unscheduled and some were scheduled but I wasn’t told about them so I would find myself with extra time in between shots waiting for areas to open up for me to shoot. With this extra time, I decided to create an architectural video to complement the photo set. I didn’t have any commercial video projects in my portfolio and, while they didn’t hire me for that specifically, I took advantage of the opportunity to make one. This was shot primarily on a Blackmagic Pocket Cinema Camera 6k Pro and a Rhino slider, as well as my Sony A7RIV, which I was using for the stills.”

“There were other challenges that I faced that were ones we all deal with such as unpredictable weather, environmental distractions like reflections, unwanted objects, etc. but some of the typical things we deal with such as communication, difficult people, staging, and gathering people – I did not have an issue with,” says Jordan.

“The employees and communications staff that I was working with were absolutely amazing and I wish I could take them with me,” he says. “The communication was almost always instantaneous. They were available to help wrangle people together, handle all of the model-release forms, consulted with me on compositions they were going to use for specific campaigns, and most importantly – they laughed at my stupid and awkward jokes.”

“I am always intimidated by the idea of incorporating people into photos – especially large groups, but this was one of the more important things they needed for these shots. Once I get my shot composed, however, my old wedding and portrait photographer brain kicks in and little tips and tricks I learned over the years come in handy. The way I deal with anyone in photos (especially in large groups) is that I start by telling everyone to just go find a place and use the space how you would use it. This is usually a disaster at first, but it gives me a great starting place. People scatter around and then I can position them according to different compositional “rules” and ideas I learned over the years.”

I am impressed by Jordan’s ability to photograph the sheer breadth of this place while keeping the images feeling like a cohesive set. There are so many different meeting rooms, lounges, workspaces, and reception areas. He ties the whole thing together so nicely.

Jordan shares some sage advice, saying, “My biggest lesson learned on this project is to never work again without an assistant. I did this entire shoot on my own and I would have had significantly more success and fewer headaches had I brought someone with me. I had to do my own flagging on 10ft tall glass walls, lug equipment around multiple floors, move furniture, and pay attention to every single detail so as to not miss things. Fortunately, the extra time I had between shots afforded me some [flexibility].”

Here is a batch of images that shows off those massive banks of windows. Jordan’s timing with the light here is perfect, and his slightly askew perspective creates a sense of depth, while capitalizing on the rhythmic shadows and lines that fill up this scene.

Again with the long shadows and strong lines!

By harnessing this strong, angular light, Jordan creates a beautiful mood in this image, elevating it from just another boardroom photo to one that is rich, textural, and a joy to view.

A gigantic thank you to Jordan for submitting this project to us. I don’t often connect with corporate or commercial architecture, but his photographs of the Alliance Bernstein headquarters were a refreshing look at this genre for me, and I hope for you as well!

See more of Jordan’s work on his site jordanpowersphotography.com or check out his Instagram @jrdnpwrs.