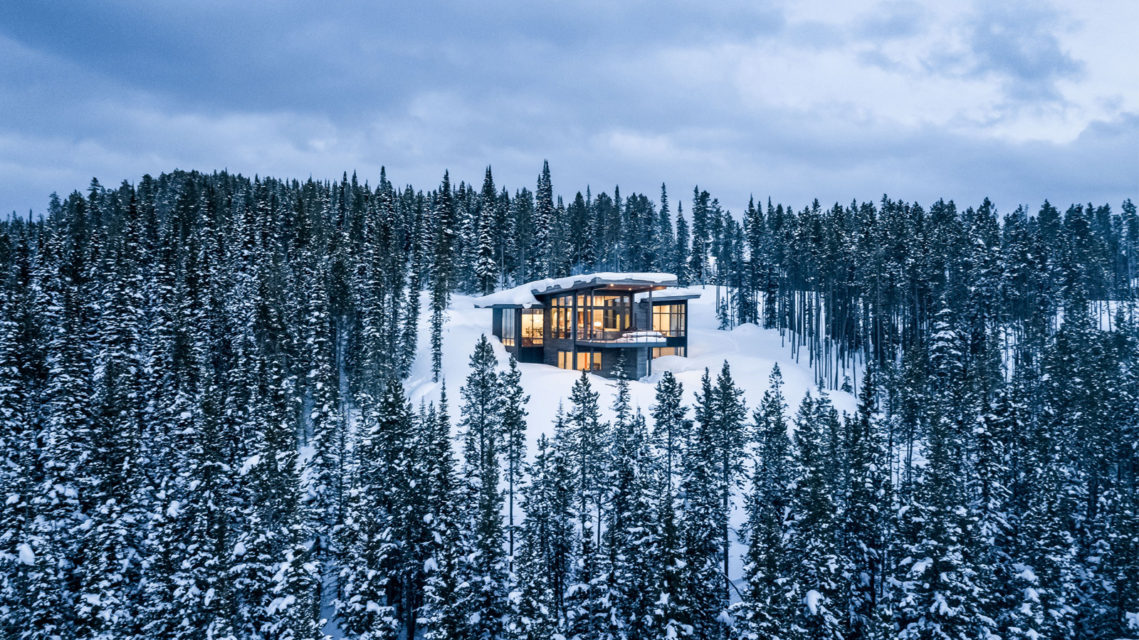 Gabe Border in Boise Idaho is just the ultimate coolest because, not only is he an incredible architectural photographer, but he is also a falconer which is the most badass thing ever. Gabe also fly fishes, and rolls up his sleeves to do his own home renovation projects. We’ll have to get him back for an interview, eh?

Today we’ll be checking out Gabe’s photographs of the Black Moon house by Reid Smith Architects.

Black Moon is located in Big Sky, Montana. The board-formed concrete home, is surrounded by a pine forest and looks out at the Spanish Peaks. There is no better photographer to document this project than this adventure-loving, outdoorsman extraordinaire.

Gabe recounts that the biggest challenge he met on the shoot was navigating the snow. “The location was on a steep slope that required me to snowshoe around the perimeter in 3 feet of powder. My first lap down, the snowshoes basically turned into skis because of the angle. I for sure thought I was going to destroy my camera and lens. Once the track was set, it wasn’t too bad to do laps around the property. The light changed a bunch through out the day, so I re-did several compositions to get the different light values. I had a big down jacket on that had me sweating after each lap.”

Gabe’s snowshoe track left a pristine, untouched swath of powder between him and the house. Its ultra-clean appearance places the building in its surroundings without distracting from the architecture itself. The added benefit is that it gives the illusion that we just walked out of that pine forest and happened across this gorgeous home right after a snowfall. It’s a magical feeling.

Inside, tight vignettes show off the craftsmanship and details found in Black Moon. On the left, Gabe’s composition frames up the window where we are able to see just how massive the snow drifts surrounding the home are, as well as the landscape beyond the property. On the right, directional lighting pulls out the grain of the wood and brings definition to the custom air register.

Gabe explained that the homeowners’ dog had just had surgery, but his serene disposition made him the perfect model in this livingroom scene. What I love most about this image though is the array of leading lines that this one-point perspective capitalizes on. They drive our eyes through the entire frame and out the window where we get a panoramic view of the Spanish Peaks. What a location!

There is a very casual feel about this shoot —and I would say Gabe’s work as a whole — that teleports you right into the space. It makes it feel as if you’re snowed in at this incredible house with the fire going, curled up on the couch.

This feeling echoes throughout all of the rooms Gabe shot. It looks like someone had just hopped out of bed and right out of the frame. The styling and composition bring a level of cozy life that perfectly compliments the weather just outside those grand windows.

The current trend in interiors photography is lights off for clean color management. But I love a good “rule breaker” and enjoy when lighting design is shown off. Look at the way the under counter lighting warms up the wood and creates dimensionality and shape under the island. The golden glow adds a lot of mood and presents nicely with the snowy conditions found out the windows.

“I try to do as little as possible with removal of objects when it comes to post processing” explains Gabe. “I’m completely burnt out by working on projects that aren’t 100% for photos and having to fix ‘insert whatever.’ When starting out, I remember seeing super established photographers with photos that had tons of little objects like power lines in shots and would think the quality of the image suffered. Now I completely embrace it as it’s really there (though nearly all of my clients still request removal of all that stuff and — well — I do it). I like to push and pull colors as much as possible without pissing off the interior people and their quest to match the wallpaper exactly. Straight out of camera is best if possible!”

As dusk falls and the exterior view levels out in exposure with the interior, Gabe captures the incredible mood of this home. I love the complimentary color work playing out between the warm glow of the interior lights, and the blue hour light washing in from the landscape. The view out the windows has become more apparent and even more impressive!

We’ll wrap up this Project of the Week in a similar fashion to how we began it. We see Black Moon glowing like a warm little beacon in the middle of the pine forest at dusk. What a beautiful photograph of a beautiful project!

Infinite Thank You’s to Gabe for discussing this project with us. You can drool over the rest of Gabe’s work as well as his adventures by following him on Instagram @gabeborder or by hopping over to his website gabeborder.com. If you need me, I’ll be spending the rest of my daydreaming about living at Black Moon.