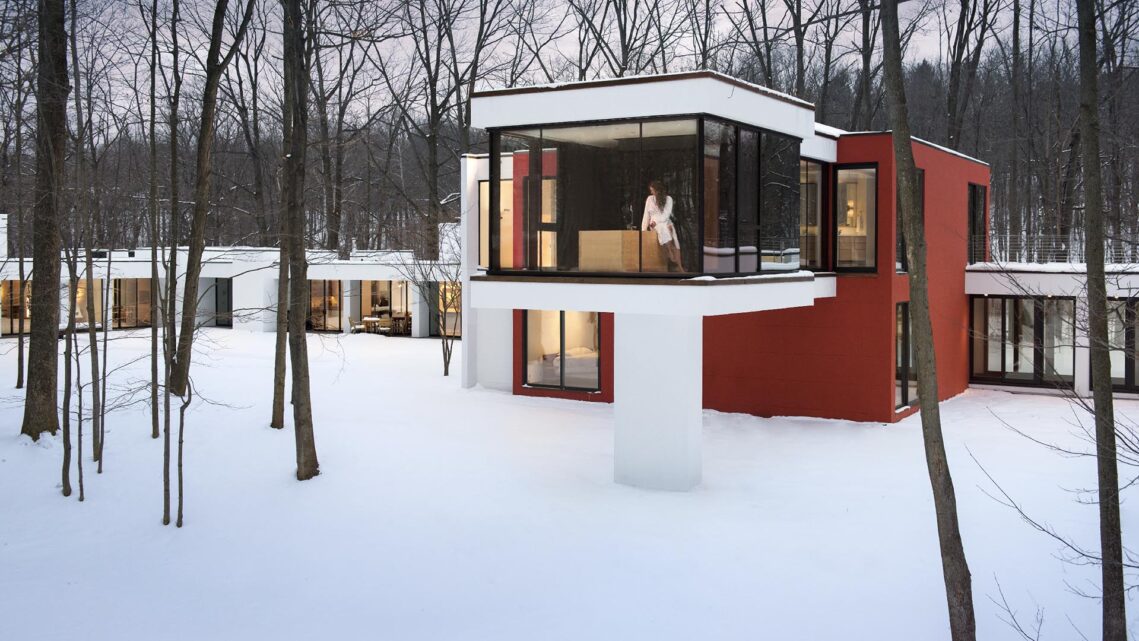 With the blanket of snow, color palette, and the soft warm glow emanating out of Architectural Resources’s House In The Woods, I had originally thought that my new friend Kim Smith’s photographs would make a particularly cozy and holiday-ish Project of the Week. But actually, as she told me about this shoot and sent the entirety of the project over, it became so much more than that.

This is a story about seizing opportunities and manufacturing confidence to ask for what you want — because it might just turn out to be exactly what you need. In this case, Kim said yes to her first-ever commissioned project, planted the seed in her mind for an off the cuff, risque art endeavor, and came back years later to make that happen. In the process, she grew as both a photographer and a person. If you leave this Project of the Week with nothing else, let it be the importance of growing through new projects — both commissioned and personal.

There is no one better to tell this story than Kim herself, so here we go:

“This might sound cheesy, but two phases of this project helped me find myself. The first was commissioned by my very first architectural client and aims to please them. Years later, the second phase was shot as a personal project and aims to please me.”

“[At first,] I was intimidated. Having come from shooting kitchens for a manufacturer, I thought I’d just do that the rest of my life. I had a modest but solid portfolio from that prior employment. Then an architect found me through Houzz or LinkedIn and called. Architects intimidated me because having come from Interior Design schooling, the hierarchy is such that they’re viewed as being on the top-notch. I’ll be eternally grateful to John Doster, the architect that saw my potential and took a gamble hiring me for such a unique project.

To add to my fear, I was used to shooting interiors only. At that time, I was over-dependent on strobes as that’s the only thing I knew from Where Art Meets Architecture I. The thought of photographing the outside of a building with natural light scared the hell out of me. I didn’t even know what blue hour was. Then to see such an extraordinary design in the Buffalo NY area – an incredibly conservative place, not at all up to speed with contemporary design – thrilled me and made me sweat bullets.”

“I was also nervous the first time because the homeowner oversaw the filming of many commercials and was very particular about color temperatures. He specified the Kelvin of the bulbs in his home and wanted the hue to be on point in my shots.

An interesting side point — I posted the set to Dwell and they selected it for the house of the day. This caught the attention of a location scout who got in touch with me. I forwarded her info to the homeowner and he allowed them to film scenes for Bashira. Apparently, the perfect white bedroom was splattered with ‘blood’.”

Kim continues “I was scared but my passion for great design overruled my trepidation. I knew this design was extremely special and it was an opportunity I couldn’t miss. I believe you shouldn’t let them see you sweat, and you have to fake it till you make it. I was scared but I could see the hero shots in my mind after scouting. I had time to plan and give it plenty of forethought. My assistant at the time, Brandon Schuster, was always of great encouragement. Every time I accepted a big assignment, I’d say ‘I don’t know how I’m going to do this.’ His response would be, ‘You always say that. Then you kill it.’

I had seen enough fantastic architectural/editorial photography to know that using a model takes something up to another level. So getting the first model was my idea and I’m grateful Architectural Resources was willing to go along with it. She was especially essential because the materials in the Hinoki addition make it a little difficult to understand and read. Lots of glass mixed with reflective surfaces confuse the eye in the tighter shots – which I like. But I had to convey how the space was used. So a bather was essential.”

“Years later, the designer from Architectural Resources (Michael DeLuca) got in touch to discuss doing more work for the firm in the future. He also mentioned that the homeowner was now selling the home and remembered the shots I created. He asked if I’d be willing to come back. So I captured traditional shots to serve his purposes in exchange for having the freedom to create more experimental shots for myself. He gave me two days and compensated the new model. At that point everything was between myself and the homeowner who happens to be in marketing and has overseen many productions. He understands things get moved around and decluttered. He was on board with all of that anyway to make the MLS shots as appealing as possible.”

“When I revisited the House in the Woods in autumn, it happened to be at a time of liberation and relief in my personal life. With newfound personal freedom in hand, I approached the architecture with creative freedom as well and one was expressed through the other. Without a client to satisfy, I could experiment and stretch beyond the standard commercial style that I’d normally deliver to my more traditional clients. I played around with some technical elements like plane of focus, shallow depth of field, underexposed frames, and unconventional perspectives. Beyond that, I wanted to work more closely with a model to bring out the sensual nature of this exceptional home. The approach was a little creepy. Let me explain.

Having studied the history of cinematography and devouring Visions of Light, I often look to cinema for inspiration.  One film’s story line seemed fitting for this secluded home nestled far into a private property: Manhunter.  In that beautifully shot film by Michael Mann, a voyeur/serial killer climbs trees around wooded homes at night, peering into transparent contemporary spaces and their unsuspecting owners. The character would have loved this house.”

“Since the first shoot, more trees were planted and they were full of fall foliage. The completely transparent nature of the elevated Hinoki tub practically begs for an exhibitionist and voyeur. The homeowner assured me that when he disrobes for a bath or swim in the pool, the only audiences are chipmunks. Regardless, with the film as inspiration, I did my best to channel my inner creeper as I scouted the property. I think I creeped myself out because every little sound in that quiet forest startled me as if I was the one being watched. Darn chipmunks.”

“Taking things a step further, this home is really about the senses and keeping one connected to natural stimuli. Aside from offering unobstructed views of the woods and creek, it is a platform from which one can bathe in all the delights of nature. The smell of the woods, the sounds of a babbling creek, the warmth and weightlessness in water; It’s a sensual experience and I wanted that to translate in the photos. I firmly believe that great architecture isn’t and shouldn’t be simply pragmatic. It can be an experience that nourishes, nurtures, stimulates and uplifts.”

“So at the risk of upsetting some conservative folks, I worked with my brave model to create a fairly intimate set and explored the voyeur’s perspective a bit. Caution was taken to be tasteful and not exploitative. Silhouettes ensure modesty but also give the imagination a little freedom to roam. (I kept the model in flesh-colored leggings and cami for the “nude” shots.) The tub and pool shots are obviously non-nudes and I think that’s fine. I think what happens still happens is the house becomes somewhat personified. It is interacting with the model and she with it.”

“I still look back on that experience as my favorite photoshoot to date. Not just because of the beautiful design but because it helped me discover — or rather rediscover — what I’m passionate about. I pursued a degree in Interior Design in the first place because I love the tailored and intimate nature of residential design. Now from a personal perspective and that of a photographer’s, I’m further convinced that a house isn’t a home, and buildings are just piles of bricks if there are no sentient beings — joyful ones in particular. Inhabitants, interactions, experiences are what breathe life into architecture and architectural photography. I’m incredibly inspired by Fernando Guerra, Ema Peter and Anjie Blair in particular. I think the use of people (and fur babies) in their work is absolutely brilliant. The rather uninteresting can suddenly become interesting. Something that is otherwise dead and static awakens and has an emotional impact.

Ten or 20 years ago I would have never shot something quite this sensual in nature. I may have protested and sited women’s issues, which I still feel strongly about — maybe even more so now. At the same time lot has changed in life. I feel more comfortable in my own skin. I’m embracing my womanhood. I’m finally coming into my own as a human being and photographer. I think that’s what this set shows vicariously. Epicurean experiences and a joie de vivre in designed environments are what I want to continue to capture when the right commissions come along.”

Kim Smith recently had a great conversation with architectural photographer Anjie Blair about a myriad of great topics including her experiences as a woman in the world of architecture and interiors. You can check out there chat here:

I’d also encourage you to check out a great project that Kim is at the helm of — the @women_arch_photographers Instagram account — which shines the spotlight on incredibly talented female architectural photographers throughout the world. I’ve found quite a few of my new favorite artists through there, and I’m sure you will too!

To see more of Kim’s gorgeous, clean, and well-made photographs, you can visit her website kimsmithphoto.com or check out her personal Instagram account @kimsmithphoto. Thank you Kim!