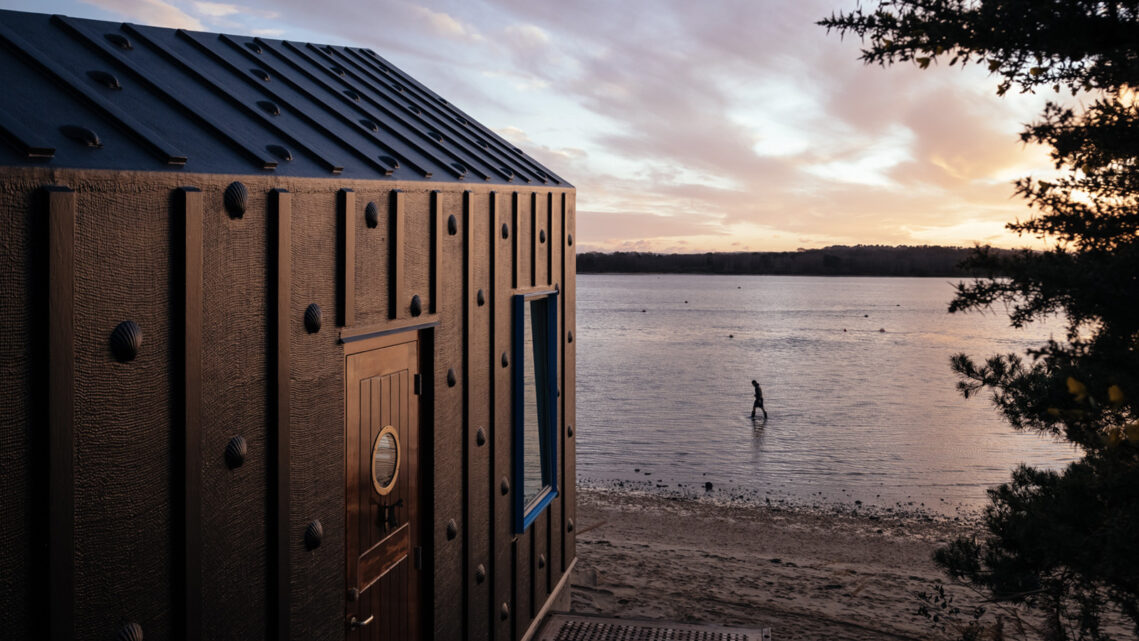 On this episode of Project of the Week, UK-based Jim Stephenson tells a bit about blurring the line between film and photography, the importance of detail, and getting whisked away in a rowboat while photographing The Pottering Shed by Studio Mutt.

“This was the first project I was commissioned for this year, so it was early January on the English coast – bloody freezing! The sky was pretty clear, sun very low, and there was barely any wind. The sea is shallow in that part of the coast so it was possible to wade out in wellies, but we also jumped in a tiny row boat for an ill-advised trip further out (more on that later…)” Jim regales.

“I arrived in the morning and met Alex from Studio Mutt, and the owners of the home. The Pottering Shed sits at the bottom of their garden, but before we started I had a tour of their home – a long time ago a local businessperson purchased the interior of a luxury liner that was being decommissioned in the harbour, dragged it all up the hill and built a house around it, so the interior of the home is still an old ship. Kind of like walking onto the set of a tiny remake of Titanic. After the festive break, I was ready and raring to go!”

I had asked Jim if he had worked with Studio Mutt before, or if this was their first time shooting together. He answered, “This was the first project I’ve worked on with Mutt but we’ve known of each other for a while and been in touch before. There’s this really interesting architecture scene in the UK right now, of young practices working in art and cultural projects, research, smaller architecture, urban realm work and finding different ways to build. I’m lucky enough to work with a lot of them, and I’d been wanting to work with Mutt for a while. Hopefully, there’ll be more!”

One thing, in particular, I am always stricken by when I see Jim’s work – and particularly in this project – is his ability to set the scene for us, and portray the architecture so beautifully in its environment. He infuses his images with a powerful sense of place. Can you smell the sea and hear the small waves lapping on the beach around The Pottering Shed? I sure can!

He also is a master of creating a charming and playful mood in his projects. The face peeking out the window on the left, and the rowboat leading our eyes to The Pottering Shed on the right are prime examples of his prowess in this regard.

Speaking of the rowboat, Jim has a story about it;

He starts, “Well, we knew it would be important to get some photos from across the water, looking back to the Shed. I had a drone with me but the house is right next to a base where the Navy train for Special Ops, so we were very restricted as to where I could fly it. The solution was to get in a tiny rowing boat and head out on the water with the camera.

Alex was rowing and I was directing, or I was for the first few minutes before we realised we were caught in the current and (quite quickly) heading out to sea.

I abandoned taking photos and leaned over the side of the boat to grab a buoy to stop us drifting away and Alex put in a stretch on the oars to get us to the next buoy for me to grab, then the next one, until we were back in still water. I honestly thought we were going to have to call someone to rescue us at one point – I had visions of the Navy Special Ops team coming out to drag us back to shore in our little row boat!”

I was curious to know Jim’s approach to shooting a smaller scale project like The Pottering Shed, and in his opinion, how it compared to shooting something a bit more traditional. He shared “Yeah, I mean every project is different isn’t it? Smaller projects are different for sure.

Usually, in a project of this scale, there’s more room for the design team and the contractors to spend time on the details and how the building is put together, so as a photographer I can really get into the small-scale elements of the building. The Pottering Shed has some great details – from the shells that were taken from the beach, it overlooks and embedded into the exterior walls, to the numbers on the interior walls that indicate to the builder how to put everything together. I trained and worked as an architectural technologist and most of my time working in practice was doing detail design so I’m drawn to documenting that kind of thing.”

One of Jim’s favorite images from this set is Roger drawing at his desk. He speaks about his methodology here, telling “The shed is designed for analogue pursuits. Painting, drawing, reading, etc, and I wanted to show it in use. This can be tricky in small places as you often can’t get very far back from the person, so they dominate the frame and the photo becomes more about them than the space (although sometimes that can work really well).

In this, after moving some furniture out of the way I could get back far enough to line up the composition I wanted and I asked Roger to spend some time sketching and printing. I waited for a bit, until he was lost in his work, and just as I was about to take this photo the sun came out – a really low, late afternoon sun through the window. A quick change of the exposure and everything felt perfect. That’s basically what our job boils down to isn’t it? Pressing the button at the right time?”

The low glowing sun makes itself visible again here, producing a gorgeous silhouetted image that speaks perfectly to the detailing on The Pottering Shed, as well as its breathtaking view.

“About half of my work is making films about architecture, so cinematic techniques definitely bleed into my photographic work as well,” Jim shares.

“In this instance, I made use of gaze space.

In cinema, you’d typically be using this in the context of a person by leaving space to the side of the frame that they’re looking into. It implies contemplation is going on, that the character is looking into space – there’s something to look at and they’re spending time doing so. This trope immediately creates all sorts of questions in the audience’s mind – what’s there that they’re looking at, why, etc etc?

In our world architecture is the character so at the Shed, the implication is that there’s a view and that the space is a reflective one.”

We’ll close out our time at The Pottering Shed with a bit of advice from Jim to photographers shooting projects of a similar nature. He explains, “Although I have a half-day rate, in most cases I find I don’t get much done in the other half of the day so I tend to leave it pretty free. For smaller projects like this, even if you think it won’t take long, it’s worth leaving a little extra time if you can. I wouldn’t have got the photo [of Roger at his desk] if I hadn’t done it here. Take your time, don’t rush, enjoy your surroundings, and don’t get in a row boat.”

Sage advice! A thousand thank you’s to Jim for sharing this beautiful project with us.

You can (and should) see more of Jim’s wonderful work at clickclickjim.com, as well as on Instagram @clickclickjim