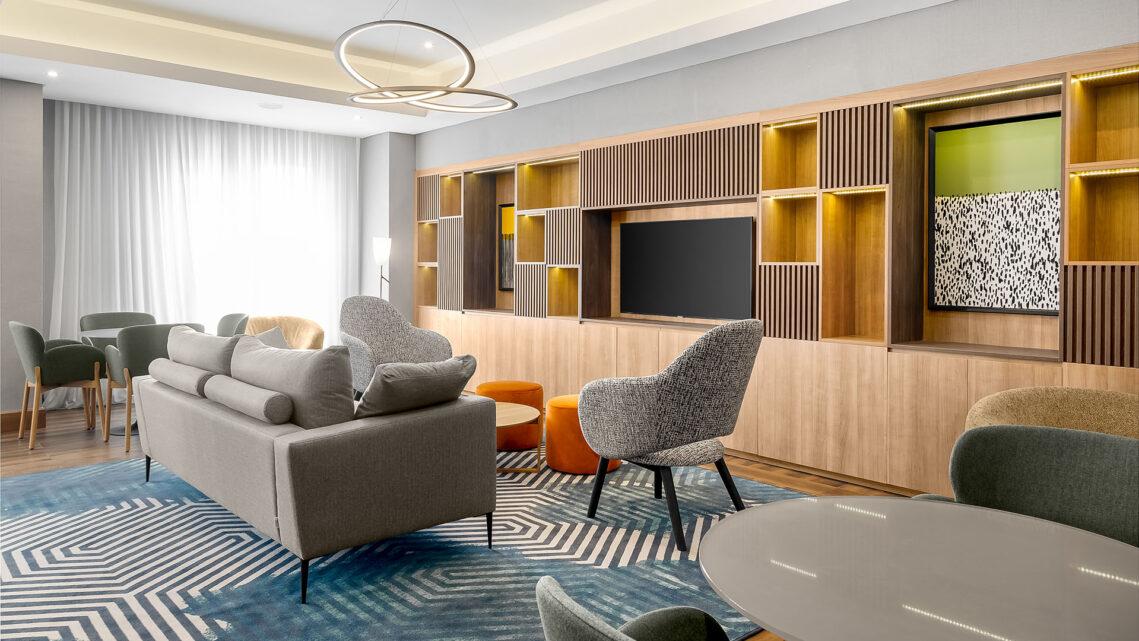 Meet Mujib Ojeifo, an architectural photographer based out of Lagos, Nigeria. Mujib has his bachelor’s degree in Mechanical Engineering and a master’s in Facilities Management. He started his photography career in 2017 as a wedding photographer. A longtime admirer of buildings, Mujib took photos of architecture on his phone as a hobby.

“In 2018, a major construction company in Nigeria reached out to me after seeing a few buildings shot with my phone on one of my other Instagram accounts. That was the beginning of my sojourn fully into the world of Architecture Photography,” he says.

Mujib’s work is beautiful. It sports an ultra-clean and tidy look but is not devoid of warmth. Today’s featured project is a perfect example of that. We’ll be checking out Mujib’s photographs of Four Points By Sheraton.

Mujib explains “This project, Four Points By Sheraton, is located in Oniru, Victoria Island in Lagos. It was shot for Trustwood Nigeria Limited. The team at Trustwood was tasked with the upgrade of major parts of the common areas in the hotel. The areas worked on were the lobby/cafe area, the conference/meeting rooms, and the private lounge with a mix of wood and metal works.”

He does a beautiful job of breaking down this complex room into parts that help us make sense of the different seating arrangements and the overall intended usage of the space. It feels neat and clean without appearing too sterile. We are able to appreciate the built-ins he was hired to showcase.

Beautiful vignettes allow us to hone our attention on the details, textures, and craftsmanship found throughout this project.

Mujib tells “This project was shot over 2 days. There were loads of challenges experienced, especially as the hotel was still operational. The conference/meeting rooms and the private lounge were shot during the day on the first day while the lobby/cafe area were shot late at night on the following day when there were fewer people.

Sadly, the daytime shots were still very restricted and limited as the hotel management had strict times when the photos should be taken hence I had to battle with harsh sunlight when shooting the private lounge.

Since the project was shot for Trustwood, the shots taken had to tell the story of the spaces in relation to the wood and metal used for the upgrade.”

In the cafe we get a good look at the wood and custom fabrication that was so important to show off. Mujib does a nice job of drawing our attention to these elements while allowing us to note the overall design of each area in the hotel.

He gives us a look into his gear bag, telling “I shot this project with a Canon 6D and a 24-105mm f4L lens (mostly at the 24mm focal length)…all with available light. I have never shot a project with additional light.”

Again, a tight detail shot rounds out the project and contributes to telling the full story of Four Points.

Mujib had mentioned that working around the hotel during operating hours was a big challenge. I think though, including an occasional figure – like in this scene – does a great service to this series and helps us better understand the scale and functionality of this space. It brings a sense of life to the scene.

“The photo of the semi-formal meeting space in the Lobby/Cafe Area is my favourite photo. It may look very simple but the circumstances that brought about the shot were very special. I had pictured the shot while taking the reverse view that had the orange couch overlooking the bar but didn’t take the shot. However, when I was concluding the entire session and the housekeepers were gradually moving in, I quickly ran over to the space, set up my camera on the tripod, and arranged every piece of furniture to achieve that perfect one-point symmetry shot – all done within 5 minutes,” Mujib explains.

Many thanks to Mujib for sharing his work with us here on APALMANAC, along with an insightful look into his process!

See more of Mujib’s work at mujibojeifo.com as well as on Instagram @mujibojeifo.