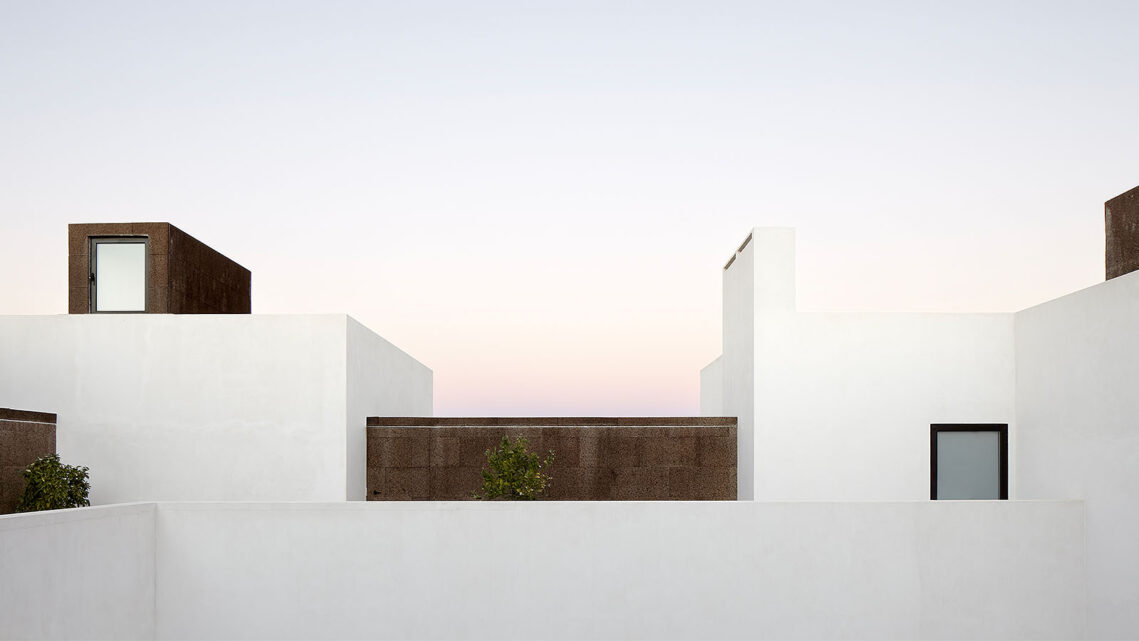 We could all use a little trip these days, so this week, Cologne-based architectural photographer Annika Feuss is taking us on a visual vacation to Villa Extramuros. Extramuros is a Villa-Hotel in Arraiolos, Portugal, and Annika shows off its gorgeous graphic shape, tranquil interior, fruit trees, and relaxing air, just perfectly!

This series speaks to the power of spec projects, and the great images you can make when you slow down and take your time. Even though Annika took these seven whole years ago, they’ve aged marvelously and don’t look out of place in her current (and incredible) body of work.

Annika introduces us to the project by telling “I took the pictures of Villa Extramuros 7 years ago. I had started my own business as an architecture photographer 3 years earlier and wanted to photograph the villa as a free project. The hotel is in Portugal and everything there is really magical. There is nice music is playing everywhere, it smells amazing, and the furnishings are perfect down to the last detail — so it is the perfect place to relax and take beautiful photos. I was there for three days in total. When taking these kinds of photographs — especially in the last few moments of twilight — you don’t have that much time. That’s why it’s great if you don’t have to do everything in one day.”

I love the angle Annika uses to show the length of the villa’s common area. Her perspective gives us a look into the separate nooks, telling us a bit about the villa’s design for privacy. I appreciate the long shadows and beautiful light flooding in from the massive windows to denote the time of day and give some visual interest.

Outside on the rooftop, we are met with a labyrinth of walls and shapes. The subtle shadows help relay the rectilinear shapes of the walls and give a great 3D appearance in this 2D medium. I love the layers in the foreground and how the greenery adds a bit of zen color and organic shape to contrast the rigid and hard feeling of the architecture.

“With such a beautiful place and limited time, you have to decide what to photograph and then take your time for those special places” Annika shares. “The villa had already been published a few times before my stay there — so it was important to find my own pictures and not be influenced beforehand. Since it was already November, I was a bit worried about whether the sun would be shining. This is a place that you absolutely need sun for. Fortunately, my worry was unfounded and the sun did not let me down!”

Annika’s favorite photograph from this shoot is one that reads as a bit of an abstract. “The sky alone could look almost cheesy,” she says. “But, in combination with the graphic facade it creates the perfect contrast.” I agree — and what is created is a gorgeous representation of the villa’s form and the subtle textures that make it up.

“With the villa, the owners have created a place that makes it easy for an architectural photographer to take beautiful pictures. The architecture is very graphic and offers a great contrast to the wild landscape. The cutouts in the facade, in turn, allow great views of the surrounding hilly landscape,” she states. “I took the pictures in November, which means the sun is never that high in the sky and the sunsets still have a slightly nicer, colder light in winter than in summer. I especially like the time very shortly after the sun has set — you still have enough daylight but no hard shadows and the sky gets these beautiful color gradients.”

That leads to my personal favorite photograph from the series, which embodies everything that Annika mentioned. The graphic shape of the villa and its cutout drive our eyes to the dreamy sunset over the mountains and the town beyond. The pale blues and oranges give enough color without feeling too ‘Disney.’ The deep green and the black table and chairs contrast beautifully with the rest of the scene. We are given a great sense of place, and this seating area looks so serene and inviting!

Lending us a look into her process, Annika shares “An important technique that I was learning at the time and that was important for this project is stitching. I took several pictures with a tilt/shift lens and then stitched the pictures together in Photoshop. This allowed me to show more in the picture without having to use a lens that is even wider.”

We’ll end this Project of the Week with this shapely beauty! Again, Annika’s careful perspective and camera height allow us to see the way the cutout wraps around the building, and she shows off that little sliver of sky that draws our attention to the top of the villa. The blue sky contrasts beautifully with the white facade and warm glowing lights. It’s perfect color theory that creates a harmonious scene — one that’s perfect for this ideal vacation get-away.

Many, many thanks to Annika Feuss for sharing this project and her experience with us here at APA!

You can see more of Annika’s beautiful work by dropping by her website annikafeuss.com or by following her on Instagram @feussfotografie.