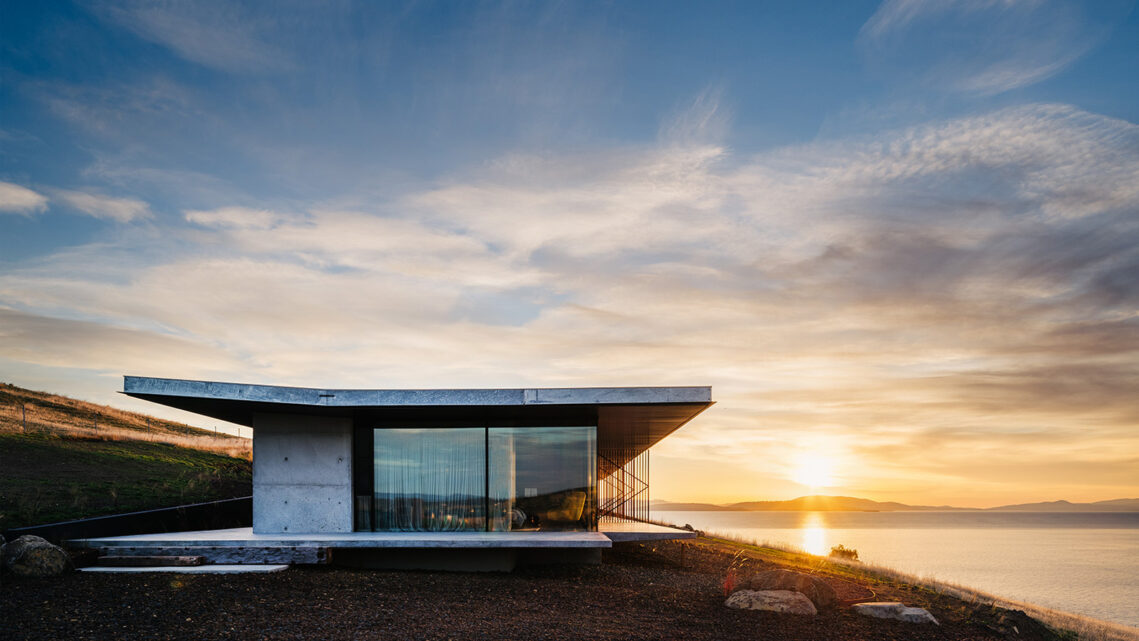 Today, architectural photographer Adam Gibson is taking us to ‘The Point’ – a jaw-dropping home designed by Tanner Architects in Southern Tasmania. The Point rests on a rural hillside, looking out over the ocean. Adam has done a beautiful job placing this house in the context of its environment, showing off the materiality, infusing each scene with an otherworldly mood, and helping us understand the details that make The Point so special.

Adam has a heap of great intel that affords us a look behind the curtain of his processes on this shoot, so I’ll let him take it away. Adam starts, “I was engaged to shoot the project by local architect Stuart Tanner, of Tanner Architects. I have photographed a few of Tanner’s projects over the last couple of years here in Tasmania. The work that their practice creates is very appealing to me, often with locations near the coast and the ocean – which I grew up around, so it has a personal significance to me. This particular project was especially interesting to me, as I lived a few kilometers down the coast from this place as a child, and I grew up surfing and exploring the point below where this place sits. It’s an incredibly sheltered, calm, and peaceful part of the world.

The goal in the first instance was to capture a sense of the house and how it sits in the landscape. Stuart explained to me that their intention with the placement of the building was carefully chosen so as to hide the house within the hill as best as possible, making it private, but also so it had a minimal visual interruption to the landscape. So it was important that my images conveyed the clever way the building recedes into the hill, and also to capture the experience of the view from inside the building.”

“I shot this place over two shoots, as the first shoot was done just after completion, with the landscape around the house still quite raw. The second shoot was to capture more hero external images now that the landscaping has regenerated.

My usual approach is built around the crucial parts of the day, being early morning and late afternoon. Over the years I have found that the images created outside of this time aren’t anywhere near as strong, so wherever I can now, my energy is focused on shooting the key images at these times.

I shot external images first, looking out to the ocean, with the building actually almost backlight – which is something I usually try to avoid. However, in this instance, the sun was on the right angle and the sky was very beautiful, and the images from that morning worked well,” he explains.

A prime example is this next image, which turned out to be one of Adam’s favorites from the series. He tells, “Normally I would avoid shooting into the sun due to flares, but I felt this image captured nicely the feeling that you would have when waking up to this view each day.

I shoot on Fuji medium format – I believe this was taken with a 24mm TS lens also. Like many, everything is shot as a bracket of three exposures, three f stops apart. This was then blended in post to incorporate the sky into the correct exposure for the building.”

“After capturing the external images that I had planned to do, I moved inside to shoot internals of the living space, as I often like to have a low sun moving through the internal images to create interesting shadow and light. On this occasion, the sun was quite intense, and coming directly into the camera, so I changed plan and moved on to the secondary rooms which were somewhat less light-critical. I believe it’s important to have a shoot plan, but it’s almost more important to be able to be nimble and change the plan when things happen out of your control,” Adam explains.

“The shoot days went well overall. The house has been styled and furnished with the help of the owners’ daughter, who is an interior designer, so there were very few stylistic adjustments to be made on the day, which is always such a nice thing!”

Adam’s compositions all place an emphasis on the way Tanner Architects have used this home as a frame for the breathtaking view that encircles it. Adam keeps his compositions tidy and concise. We are given just enough information to note the forms, textures, and overall design, without being overwhelmed with extraneous information.

“My job is to observe everything about the building/project and capture it in an emotive way. I find my relationship with my clients is built on my ability to understand their intentions, and to capture it in a way that clearly communicates this intention and the experience of the built project,” he tells.

I appreciate Adam’s honest portrayal of the space, letting areas fall deeply dark, or be awash with bright highlights. The contrast creates a rich inkiness that commands attention.

The massive amount of glazing in this project ensures that the ever-changing light reaches deep into the structure throughout the day. We can see even in Adam’s detail-oriented vignettes that there is light penetrating the scene.

Adam notes, “What I love about this house is that from almost every room in the place, the ocean is visible. The house acts as a huge picture frame to the view, which looks South towards the Southern Ocean, and ultimately, Antarctica. The land and the sea are the heroes here, and the house provides the most incredible opportunity to take in the view from.”

Adam’s one-point perspective here showcases the strong linear forms and patterns throughout the space. A subtle reflection in the glazing carries on the rhythmic texture of the tiled wall. The bold lines created by the casings are broken up by the linear divider out the window. The arrows carry our eyes out through the scene.

He lets the tub fall dark, letting the view steal the show. The balance in exposure feels perfect. We understand what it is like to be present at The Point.

He mentions, “This image is also one of my favourites, as it shows the view from the house, which as I have mentioned, really is the hero of the project.”

Many thanks to Adam Gibson for sharing this beautiful project with us. It was a joy to learn about!

Head over to adamgibson.com.au to see the rest of Adam’s stellar portfolio, or check out his Instagram @adam.gibson.photo.