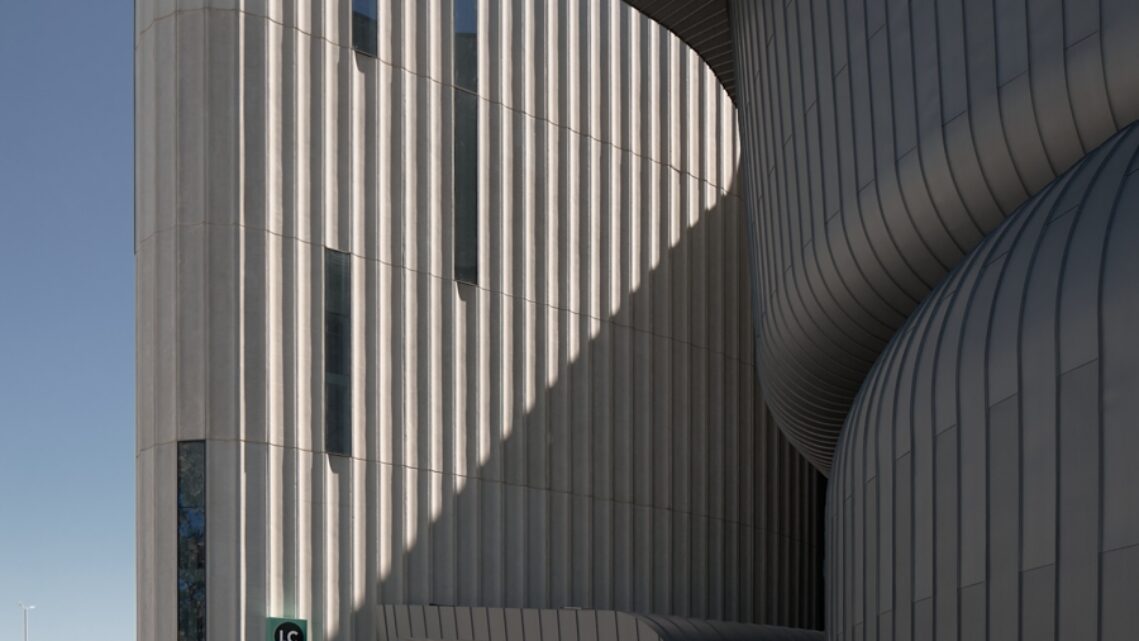 Over the past couple of years, I have been following the progress of the Deakin Law Building part of Deakin University in Burwood (Victoria, Australia) which was designed by Woods Bagot. Towards the end of the second lockdown in Melbourne, I had my chance to take a stroll around this building. When you enter the campus you are presented with the vertical tower of the complex consisting of scalloped precast concrete panels, and as you walk around it, you see the curved zinc-clad offset-stacked levels. Whatever angle you view the building, you get to appreciate the innate geometric patterns that occur on a macro level.

As I walked around admired the late evening sun bouncing of the zinc cladding, I realised the potential the site offers to a shadow play time lapse. I had every intention during summer to come here and film some footage for my own pursuit but procrastination took over.

A few weeks ago, Melbourne-based Architectural Photographer Peter Marko released a short film about the Deakin Law Building. It was a coincidence that Peter had started filming a week after my Instagram Story about the Deakin Law Building. What immediately struck me about his film was how beautifully he had captured the key aspects of the building and how masterfully he had unveiled the building through shadow play time-lapses.

After watching it, I was intrigued as to how he had conceptualised this project and pitched it to his client. Peter explained that he had initially come across Industry Cladding and Roofing through another project he had photographed for an architect. Sometime last year, he had approached Industry Cladding and Roofing about doing a short film project on their Latrobe Valley Government Hub project for his own portfolio to understand the intricacies of filming. His original scope was to spend a day filming the installation of the pods but as the day ended he had his Archimedes moment. His moment was to create a story around the entire process of transportation, lifting and mounting of the pods. This aspect of the story took him five and a half days together with an assistant and considering Morwell was a 120km drive one way and starting at 6 am. One of the technical elements in this film was to create multi-angle time-lapses to tell the story of the processes involved.

His client was elated with the end result that they offered him the opportunity to create a short film about their upcoming Deakin Law School Building. The initial conversation about the project to the actual start of filming the project took four months. Peter had proposed two days but after a couple of site visits, he revised his estimate to three days on-site. The two site visits allowed Peter to understand what aspects of the project the client felt was important to highlight their involvement in the project, as well as determining the potential shadow play areas the building offered that will be the core of his narrative. Furthermore, Peter was able to gauge how the building wholistically interplayed with light. He had spent a day photographing the interior and exterior elements of the site. The photography allowed Peter to further explore additional vantage points for filming. He wanted to use people to showcase how the interior spaces are used and for purposes of scale as well. However, due to the covid restrictions, it was challenging to have enough people in the images.

Personally, the highlight of this film is the inclusion of time-lapse shadow play from different perspectives of the site. I often found that it is one of the most challenging elements to include as your footage is susceptible to the elements i.e. cloud cover, people, delivery trucks pulling in, etc. Peter alluded that when you have three very disparate sources of footage (time lapses, dslr motion, drone) creating a uniform look had its challenges. One of his greatest challenges was the motion footage from the drone due to the size of the sensor as well as the limited dynamic range therefore he had to film in the best light possible. His plan initially was to photograph the building, followed by time-lapses, dslr motion and drone footage. In editing one of his hurdles was normalising the initial raw files to create the timelapse motion footage then apply further grading in Adobe Premiere to match the rest of the footage.

Peter had made a conscious decision on how he had used the drone footage in order to slowly reveal the various aspects of the building rather than making the entire film like a drone flyover which is typical for construction content. Furthermore, he intentionally filmed most of the footage during dawn and dusk as he wanted to avoid showcasing the building in the bright sun because the facade becomes too bright.

Asked, what he would do differently on the next project, Peter replied, “to factor in more time”. He had invested a significant amount of time in the pre-production stages, unaware of the time it would take to organise the relevant permits, ideas on what the film may look like, and the approaches he would take. He had initially estimated three days to capture the material required for good production. In order to create an exceptional film, he felt he needed another two days which was the case in the end. In hindsight, he felt that having a couple of assistants would have allowed him to capture the required footage within three days if the budget had allowed for it. Admittedly, Peter said that he has been in a dilemma on how to create an optimised workflow on site that allows him to capture five days worth of footage in three days. Part of the workflow potentially involves having a third camera setup, allowing him to shoot three time-lapses and drone footage concurrently with assistants.

In late February, I was listening to an interview of Elon Musk on Club House. The interviewer had asked Elon what was his approach to problem solving. Elon replies that he needs to know enough about a problem to solve it rather than becoming a subject matter expert. In a way, Peter has adopted Elon’s philosophy by creating a small project, identify problems then use it to pitch for another project. Albeit, Peter only photographing architecture for the past 12 months and instead of taking images of buildings in Melbourne and hoping it would resonate with potential architects, he took the challenging route of creating a short-film. As I have covered in my previous interviews, motion is king and there aren’t many photographers in Australia embracing this medium, especially in a more sophisticated that truly exemplifies the architecture. Productions such as this short film are not an easy task, especially if it is your second attempt. On the other hand, if the end result exceeds your client’s expectation and gives them collateral that they can use to pitch for other landmark projects then you have got yourself a seat at the table.

To see more of Peter’s work then feel free to visit his website or give him a follow on Instagram. Additionally, at the time of publishing this interview, Peter had released another short film on Bunjil Place by FJMT.