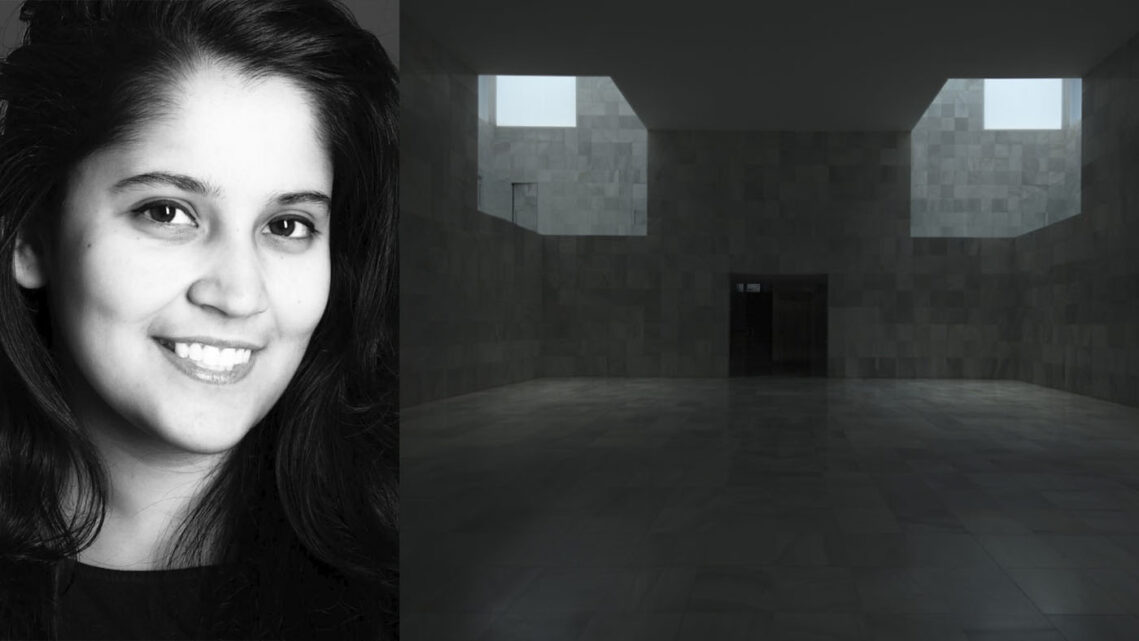 Thank you Niveditaa for taking the time for this interview. To start with what transpired in your life that took you down the path of pursuing architectural photography?

When I was younger, I had a huge interest in design, however, I didn’t quite know in what capacity I wanted to pursue it but a degree in Architecture felt a good place to start. As part of my undergraduate studies, I was writing a research paper that explored the paradoxical nature of architecture photography. More specifically, this implied that architecture photography initiated as a tool for the documentary representation of architecture but over time has evolved into something of a medium with a mind of its own.

Photographs convey the identity of the building, but also, paradoxically, convey the identity of the photographer, and this creates an interesting tension between design intent and the final photograph that represents it. I was interested in exploring this, and how it has evolved over time. The more I progressed into my research, the more it became evident that photography could say something that could completely align with or be completely tangential to the design of the space thus what began my interest in architectural photography.

I settled on pursuing a Masters in Fine Art (photography) at Istituto Europeo di Designo, in Madrid, Spain. The program had quite an inventive and loosely structured curriculum based around creating one photographic work through the year with the help of a few good European photographers and curators. It gave us the freedom to explore photography beyond the conventional role it currently plays and combine it with other media to produce something ‘post-photographic’. In addition to photography, we also learnt about editing photobooks, graphic design, cinematography and art in general.

During my MFA I wrote to Javier Callejas, a Spanish Architectural Photographer who had photographed many of Campo Baeza‘s projects. In particular, the CAJA Granda project, which captivated my attention. During my masters, I was assisting him and he has been a mentor ever since. He was an exceptional mentor as he was very open in teaching the intricacies of architectural photography.  One of my fondest memories is from when we would discuss stories for photography projects that interested us on our travels here in India or in Spain.

You have photographed a number of projects for Studio Renesa and each project has a creative narrative to it. How did you work towards a deriving this narrative with the architect that resonated with the project?

Upon completing my studies in Spain, I had started working with Studio Renesa. My initial interest in their work was their involvement in the design of print-press buildings across India. This piqued my interested in treating their press projects as a documentary photography project.  This led to my first project with them which their residential project, Casa Forma.

We brainstormed a lot of ideas on how to build the narrative for this residence, but when we got to the site, which is in a small town close to the foothills of Himalayas, it was clear that the initial design intent was the best way to describe this house – emulating the form of the mountain ranges that formed the backdrop of this residence.

Since then, with all our shoots together there has been an underlying narrative that is either common to both, the architecture and the photography, or it is completely different from both and sometimes even from the program of the space itself. That was the case with Geometrication, which is a board game cafe in Delhi, but we wanted to extend the idea of board game-like mystery and illusion into the shoot itself. We brought in the ‘Man with the Mirror’ to hint at the reflections the mirror catches from different angles in the cafe, but it was also a way to agonize the viewer with a jumbled photo of what actually exists.

Another project, OPIUM, which is an eyewear store in Mumbai, we approached the creative aspect using motion more specifically, stop-motion. A couple of the key design attributes of the space were the swivelling mirrors and the collapsible shelves that highlighted the unconventionality of the store.

I noticed on your Instagram that you have released several short video clips. More specifically, your latest work, Sway, for Pieces of Desire. How are you finding stepping into the world of filming as opposed to photography?

Filming is an extremely challenging medium to work with, but the struggle was more with the creative aspect. For the longest time, I did not touch video because I was still figuring out how I could use video to say something original about the space, or something with an artistic flair.

My first attempt in filming was a project with M:oFA Studios for their Room of Illusions project. The principal architect was extremely encouraging of my idea to fly a drone in the room full of mirrors. The premise of the video was of a drone flying around the room triggering different sensors as if it was operating in stealth mode. The short film made its way to the Archishorts film festival in Winnipeg, Canada, which gave me the confidence to pursue filming as a medium in architectural projects.

Sway is another filming project I made for Pieces of Desire, a furniture collaborative in India, who launched their first collection of swings two months ago. The action of ‘swaying’, being laid-back, sitting in the verandah on the swing and enjoying a good conversation over tea, resonates with a lot of households across western India, especially in smaller towns like Navsari, where we stayed and shot the films. I wanted to use this concept of ‘the sway’ in the furniture pieces and even in the lighting that we simulated, so it seems like everything was oscillating in the frame. The entire short film depicted the swing in motion coming to rest slowly.

One of my sources of inspiration for filming has been the movie, Badlands, by Terence Mailk. There is a lot of lyricism in that movie and sometimes it had nothing to do with the plot, which was engaging. There were a lot of understated metaphors that sometimes came out of nowhere, and it seemed like it was all loosely strung together.

I’d love to explore that in films about architecture – because I think there can be many ways to convey something about a lived space without actually revealing the inhabitants. Additionally, I am also interested in doing more films about architecture which extend beyond commissioned buildings and something is definitely in the works, but that is the most I can reveal now.

Where do you get your inspiration from in order to develop ideas for future projects?

Sometimes the inspiration can come from the place we are shooting in or the people that are living in and around the building. It is easy to find a story in their lives, especially since my experience of the building as an outsider is never as interesting as their direct confrontation with the project on a daily basis. For example, in Chennai, while shooting for MOAD architects at a cultural centre they had designed right by the beach, I was instantly drawn to the idea of having Bharatnatyam dancers in the foreground, because every day that I was there, shooting, the dancers would come and practice in a sunken court right in front of the building.

As a female creative, have you faced any major difficulties in growing your career?

To date, I have been fortunate enough not to have faced too much discrimination in the field. In some instances, there have been logistical difficulties at on the shoot or I have lost out at an opportunity to photograph a project simply because I was a female and it was deemed unsafe for me to photograph in that area.

What has been your favourite architectural shoot to date?

It has to be the Bhadran English Medium School by Samira Rathod Design Associates. The project involved adding an extension to the existing school in the heart of Bhadran in the state of Gujarat. My initial visit to the site was in 2017, while it was under construction as we were documenting the town of Bhadran for an exhibition called the “Death of Architecture”. The exhibition itself was a travelling exhibition that toured 12 cities over 4 months with the collaborative works of 13 leading architects in India.

I have returned back to the school upon completion on multiple occasions to photograph it varying light and weather conditions. Last, June I was there to photograph the finished building, and additionally, I created a series called ‘Walking in her shoes’. The series was about women and their children, walking and running around, using the space in varying ways.

Lastly, What would be your dream project to photograph and which architect in the world you would like to work with and why?

Currently, I am working on a couple of projects: One of them is a series about Indian weddings. It is interesting to find traces of the wedding in the fleeting moment when the temporary structures that house these weddings are dismantled. Sometimes these wedding structures are appropriated into very narrow interstitial spaces in high-density residential areas so that the whole community might partake in the celebration. It is interesting because it reflects the dynamics of living in such close quarters and how different that is from planned formal neighbourhoods where you might not even know your next-door neighbour.

There is a lot of famous architecture that I want to have my own take on such as the Vitra fire station, the Bruder Klaus Chapel and Therme Vals. It would be challenging to visit any one of them and have something original to say since they have been photographed beyond saturation and those images have stayed with us for so long.